Daniel Negreanu published two blog posts over the New Year, revealing both his year-end results for 2017, and his poker goals for 2018. 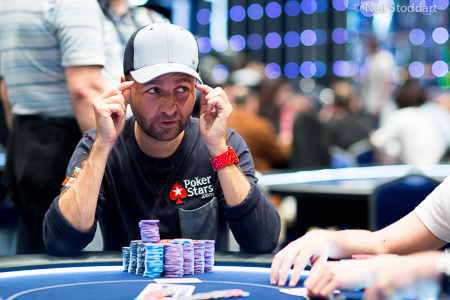 Among Daniel Negreanu’s poker goals for 2018 are to top $40 million in career earnings, win a WSOP bracelet, and finish the year in the top 30 of the GPI. (Image: PokerStars)

Many were surprised to learn that 2017 was a losing year for the all-time winningest tournament player. Despite cashing for nearly $2.8 million, Negreanu netted a negative $86,140 for the year.

Last year was actually the fourth best in Negreanu’s career in terms of tournament cashes, but the numbers can be deceiving.

“I think my 2017 was a good illustration of the illusion that players cashing for $2 million in a single year is a great accomplishment,” Negreanu wrote.

“I felt like I had a decent year in terms of results,” he said, “but when you break down the numbers into an actual profit vs loss, I essentially broke even.”

Negreanu’s 2017 tournament buy-ins totaled $2,874,164, which was slightly more than his cashes. “Kid Poker” also revealed that his average buy-in on the year was $40,481, and that he’ll look to sell about half his action in this summer’s $1 million Big One for One Drop.

“I make the decision to play and risk money that I’ve earned,” Negreanu revealed. “Having said that, I will likely be selling action into the One Drop as it just seems like a bit of a crazy amount of money to risk in one tournament.”

Negreanu then revealed data on his past five years of play. Among the highlights:

Daniel Negreanu continued his tradition of releasing poker goals while looking back at the year before.

In 2017, Negreanu met five out of eight goals he publicly set for himself, including cashing for $2.5 million on the year and crossing 100 cashes at the World Series of Poker. The ones he missed included winning a trio of WSOP bracelets, winning his third WSOP Player of the Year title, and making the Main Event final table.

For 2018, Negreanu scaled back his expectations a bit. Among the 10 goals he set for himself are to win just one bracelet, top $40 million in live earnings, and to get 115 WSOP career cashes.

He also hopes to profit $2 million, finish in the GPI’s top 30, win either the Poker Masters or US Poker Open, and to final table either the Super High Roller Bowl or Big One for One Drop.

“I’ve played some of my best poker in the Super High Roller Bowl but have yet to cash due to some bad luck each year when the cards are on their backs,” he wrote.

“I plan to be lucky in 2018 and make it to the final table of at least one of the two biggest buy-in events of the year.”

Rounding out his goals are to spend 120 hours studying poker (10 hours a month), win an elusive Super High Roller title, and to hand onto the top spot on poker’s all-time money list.

Negreanu has sat atop the money list for years, but with the rise of high rollers he knows his time fleeting, especially with the return of the $1 million Big One for One Drop.

“I hope to hold it for at least one more year,” he said. “It will be tough as you can all but guarantee at least one player is going to cross the $35 million mark this year.”

You’d figure at this point he would set aside his winnings (savings) and look to be backed, give someone, a team, sell shares what have you and they risk their money on him for potential profit and of course he gets a slice along with his endorsements. At least that way he has no potential to go broke. Very foolish with his popularity, he, and many of these pros act like goofballs at their stage, status and wealth.