Daniel Negreanu has suffered numerous bad beats throughout his career. Every poker player who’s been around for awhile has. But on this Friday the 13th, we look back at a cruel beat he took on Day 7 of the 2015 WSOP Main Event against eventual champion, Joe McKeehen, just two spots shy of the final table. 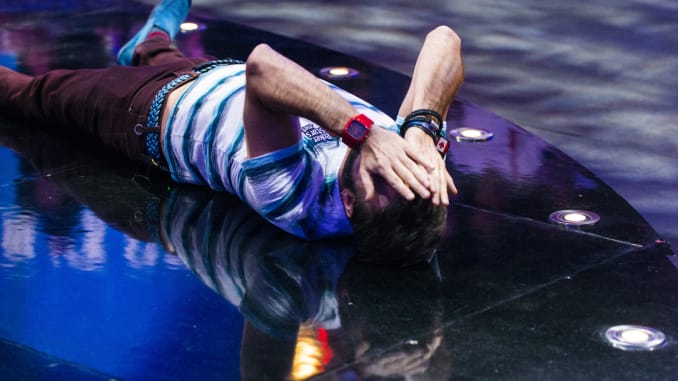 Daniel Negreanu reacts to one of the cruelest bad beats of his career. (Image: CNBC)

With it being Friday the 13th, we figured today is the perfect time to discuss a hand that ended in bad luck. We apologize in advance to Negreanu for reliving one of the most memorable suck outs in WSOP Main Event history.

On Day 7 in the 2015 Main Event, McKeehen established his dominance at the table. He wasn’t just catching cards (though that always helps). Instead, the Philadelphia native was using his big stack to his advantage, pushing players around.

He also was on the positive side of numerous coolers, including an aces versus A-K situation against Negreanu. Then, he finally busted the legendary poker pro on one memorable suck out.

McKeehen opened to 800,000 with J-3 of diamonds. Negreanu defended his big blind with A-4 off-suit. The flop came A-K-10 with two diamonds. The former PokerStars pro checked and the eventual champion fired out a 700,000-chip bet.

With Negreanu sitting on a small stack, he moved all in for 5,825,000. McKeehen thought briefly before making the call. He needed either a queen for a straight, or any diamond to bust “DNegs” in 11th place.

The turn – 3 of hearts – paired up McKeehen, but not enough to win the hand. Yet. The river card – a queen – did the trick, however, crushing Negreanu’s dreams of making the WSOP Main Event final table.

Negreanu, on the other hand, is still searching for his first WSOP title since 2013. Maybe next year.

Yes, these bad beats happen often, but with no cash 500000$ like Daniel! What a consolation!