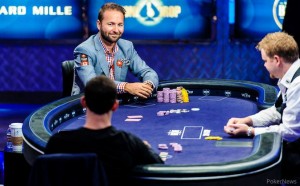 Daniel Negreanu is the all-time winningest poker tourney player on Earth, making him a likely shoo-in for a PHOF spot this year. (Image: pokernews.com)

Daniel Negreanu has final-tabled the 2014 Poker Hall of Fame (PHOF) after reaching the minimum age requirement of 40 in July. In a press release sent out earlier this week, the WSOP revealed the names of ten players being considered for the honor, and the inclusion of “Kid Poker” was largely expected, given his stellar list of accomplishments spanning an 18- year career.

Negreanu has won six WSOP gold bracelets, two World Poker Tour titles, and was the WSOP Player of the Year in 2004 and 2013. He rose to the top of Hendon Mob’s All Time Money List this summer after winning second place in the Big One for One Drop charity tournament in Las Vegas. And with that $8.28 million score, Daniel is now second to none in tournament winnings, with $29,796,380 to his credit.

And The Nominees Are…

An elite class of finalists was selected from the initial PHOF nominees along with Negreanu. The final short list reads like a who’s who of poker’s top dogs:

This world-class group has thrived in various high-stakes poker arenas through the years, earning untold millions in cash games, and taking down nearly $70 million in tournament winnings collectively. But one fierce yet friendly player has taken nearly 40 percent of the live tourney loot for himself and investors.

Most Likely to Succeed

An odds-on favorite for Hall of Fame honors, the generally affable Negreanu had some thoughts on whether personality traits such as affability should matter to voters. He offered several points in a recent blog post on FullContactPoker.com:

“I don’t think the HOF should be a popularity contest. Being a ‘nice guy’ isn’t one of the criteria. A guy being a jerk, or one who isn’t media friendly, is NOT reason to keep them out of the hall…the poker hall of fame isn’t for nice guys, it’s for kick ass poker players!”

We tend to agree. Case in point, finalist Jennifer Harman has certainly garnered a reputation for kicking ass on the poker felt, but is clearly not a nice “guy”. Daniel also suggested that neither age, poker ambassadorship, nor a criminal past should be deciding factors, but said nothing on whether he has anything to hide.

Now under the auspices of Caesars Entertainment, the Poker Hall of Fame was created in 1979 to immortalize the best of the best in poker, including significant non-playing contributors to the game. To date, 46 members have been inducted, including the likes of T.J. Cloutier, Doyle Brunson, and the PHOF founder himself, Benny Binion.

While there is a nostalgic Hall of Fame Poker Room at Binions Gambling Hall with photos of early PHOF inductees, the modern incarnation exists online at WSOP.com, where the public can nominate players starting in July of each year.

Readers can learn more about the PHOF finalists at WSOP.com. For more on Daniel Negreanu, read CardsChat’s exclusive interview.