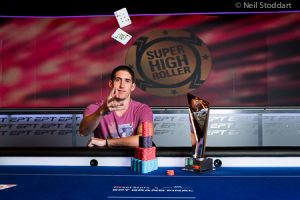 With the European Poker Tour preparing to wind down its tenth season of action in Monaco, many players were up for some high roller tournament action. The PokerStars and Monte-Carlo®Casino EPT Grand Final was hosted by the Monte Carlo Bay Hotel & Resort, and out of the 48 tournaments offered, the €100K ($138,360) NLHE Super High Roller reentry event was the largest buy-in of them all.

Action started on April 25 for the three-day tournament, and many of the biggest names from poker’s largest games were ready for it. Daniel Colman was one of them, so ready that he ended up reentering twice and investing €300K ($415,080) for the chance to keep playing, but it paid off in the end. The 23-year-old player from the US captured victory in Monte Carlo.

The Super High Roller tournament kicked off with 59 entries on Day 1, which consisted of 48 unique players and 11 reentries. There were only 37 players still seated when play stopped, though, and Philip Gruissem was ahead of the pack as the chip leader with 1,038,000 chips. Daniel Colman was working his 213K stack to stay in action.

A few new players and reentries joined before the start of Day 2, bringing the total number of entries to 62 and the prize pool to €6,015,240 ($8,322,686). Only the top eight players would be paid, and Colman was determined to be part of that mix. He took chips from players like Gus Hansen and Vladimir Troyanovskiy, while players like Vanessa Selbst and Antonio Esfandiari exited the field.

Fabian Quoss exited in tenth place, and the money and final table bubbles were both in play. Short-stacked Mike McDonald then made a move with pocket sixes against the A-Q of colman, but an ace flopped and queen rivered to eliminate McDonald in eighth place with no money.

Play started slowly at the final table, only an indication of the length of the day to come. Kurganov finally doubled on the 22nd hand of the day through Phua and then through Schemion twice. Kurganov then climbed into the chip lead after 63 hands. Meanwhile, Colman gained ground, which included taking a big pot from Lo. Phua doubled through Busquet, and the latter moved his last few chips all-in on the next hand but lost to exit in eighth place. Colman eliminated Schemion in seventh and took chips from Kurganov to climb higher. Kurganov suffered when Phua doubled through him but then did the same through Phua, who exited soon after in sixth place at the hands of Colman. Lo was eliminated by Kurganov in fifth, and Colman sent Yong out in fourth.

The final three players paused the action to discuss a payout chop, and it looked like this:

During three-handed play, Kurganov doubled through Colman but remained the short stack. Colman lost his lead a few hands later to Cates, and the former continued to lose ground. But it was Kurganov who moved all-in with a short stack holding A-2 against the Q-8 of Colman, but the latter rivered two pair to send Kurganov out in third place.

Heads-up play began with Colman holding 5,875,000 chips to the 9,625,000 of Cates, but Colman surged, first evening the stacks and then taking the lead. Colman seemed unstoppable, climbing over 10 million chips and then over 13 million. On the 202nd hand of the final table, Cates pushed his last chips all-in with Q-T, and Colman called with K-6. The board of 3-9-6-3-A eliminated Cates in second place.