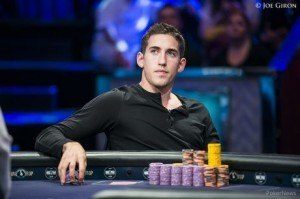 Daniel Colman looks thrilled upon hearing he has won all three Player of the Year Awards. (Image: mattalltrades.blogspot.com)

Daniel Colman has swept the board in poker’s various Player of Year Awards for 2014, thanks to a winning streak unparalleled in the history of the game.

Yep, that’d do it. Each year has its standout players, of course, but it’s rare to see all the Players of the Year Awards chime in unison, due to the disparate methods they use to score points.

However a haul of $22,389,481, which set the record for the largest amount of money won in a calendar year, and is, by sheer coincidence, the number of a Chinese restaurant in Antwerp (we just dialed it), made things pretty unanimous this year, with the Global Poker Index, Bluff POY Rankings and the Card Player POY Rankings all in agreement for once.

Knowing Daniel, we imagine he is absolutely thrilled about this.

It wasn’t as emphatic as you might think, though. Ole Schemion, for example, was a whisker away from leapfrogging Colman at the last hurdle, if it can be said that frogs leap hurdles. And have whiskers.

While December was a barren month for Colman, Schemion went on a bit of a run at the EPT Prague, cashing in three tournaments in as many days.

His final cash, at the High Roller event, netted him $ 176,176 for sixth place. Had he finished one spot higher in that tournament he would have overtaken Colman in the Global Poker Index.

In fact, Schemion’s tally of 17 cashes in major events (he only plays major events!) this year is somewhat remarkable, especially when you consider he had 19 last year.

Colman (only) had 11 cashes this year, one of which was that $15 million beast of a payday at the Big One for One Drop, but even if you imagine the One Drop hadn’t happened, he still has a “Player of the Year” type of vibe going on: a first place finish in at the EPT High Roller in Monte Carlo here; a victory at the Seminole Hard Rock Poker Open there; a smattering of major final tables and an WPT Alpha 8 victory thrown in for good measure.

Forget the One Drop

Without the One Drop, Colman still managed to win an extraordinary $7 million-plus, which is more than Schemion has won in his entire career. $7 million would have been enough to put him third in the overall money list for the year, behind WSOP champ Martin Jacobson and Daniel Negreanu.

And if the One Drop had never happened, Negreanu wouldn’t be there either, which makes things even more confusing.

Finally, though, we’d like to shower kudos on an obscure Italian player named Flaminio Malaguti, who notched up the most cashes of anyone anywhere in 2014, a staggering 47, although these were solely in buy-in events of around $100 in and around the Las Vegas area. And since Colman won all the others, we’d like to give him our POY award.

You, Flaminio, are a legend, but isn’t it time to move up in stakes?