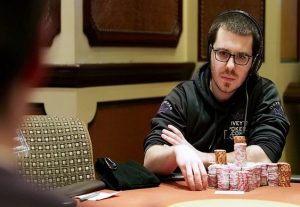 Poker pro Dan Smith is using some of his $4.5 million winnings from 2016 to help a selection of worth causes. (Image: bluffeurope.com)

High stakes poker pro Dan Smith is out to prove that success in the game isn’t all about stealing pots and banking millions.

With more than $14 million in live tournament earnings and a further $2 million+ online, it’s fair to say that Smith has enjoyed a huge amount of success in poker.

As with all professional poker players that get to the top of the game, Smith has needed to be ruthless at times.

But, just as he’s been willing to bluff a player out of their last handful of chips, Smith has also worked hard in recent years to give something back.

On top of taking part in various charity events, Smith paired up with fellow high stakes pro Dan Colman in 2015 to start a charity drive.

The aim of the first drive was to raise money for four nominated charities. Working with Colman, Smith agreed to match all donations up to a total of $70,000, which meant there would be $140,000 going to worthy causes.

On that occasion, Smith chose to help organizations involved in the fights against malaria and parasitic diseases in children as well as research into machine intelligence and improvements to the prison system.

Following the success of the first drive, during which the $140,000 target was reached, Smith has decided to up the ante.

Working on his own this time, Smith has pledged to match donations up to a total of $175,000. Thanks to a 2016 tournament run that’s seen him bank just over $4.5 million, including a second place finish in the WSOP $111,111 High Roller for One Drop, Smith is now in a position to give a little more back.

As was the case in 2015, Smith has chosen a range of charities that cover a number of areas:

Anyone wishing to donate can follow the links on Smith’s personal site or, in some cases, transfer him funds via PokerStars or in Vegas using casino chips. Unlike last year, Smith will take some “creative liberties” to ensure that each of the nine organizations get something.

As outlined in his post, if, for example, Massachusetts Bail Fund received $50,000 and Just City had zero donations, Smith would personally donate to Just City.

Additionally, Smith has made it clear that all the charities listed are tax deductible, which should serve as another incentive for poker players to join in.

The charity drive will run until the close of 2016, when Smith will then tally up the donations and make his contributions accordingly. For more information, you can check out Smith’s personal site.