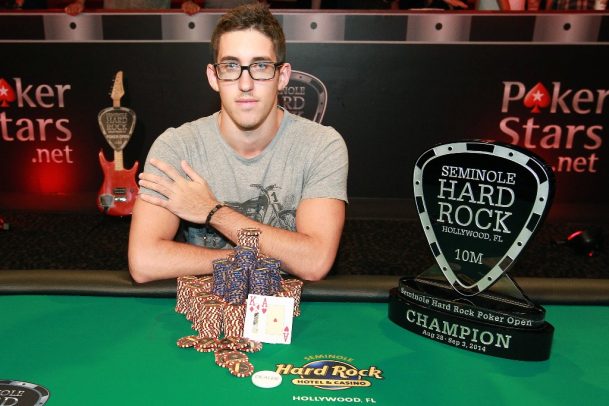 After making it through a grueling day that didn’t conclude until well after 4 am ET on Monday in Hollywood, Florida, Colman can sleep in and rest up today, as play won’t resume until noon on Wednesday.

World Poker Tour final tables have six players. Matt Affleck finally sent everyone home for the “night,” busting in 7th place ($109,728) after losing a race to Colman. The final six breathed a sigh of relief.

The Massachusetts native will have a huge advantage if he makes it to the final two.

Colman is a heads-up specialist who knows how to close out a major tournament. Known as ‘mrGR33N13’ online, the 2014 $1 million WSOP Big One for One Drop winner will enter the final table with 9,975,000 chips, or approximately 100 big blinds.

He recently passed Antonio Esfandiari on the Hendon Mob All Time Money List, pushing past him to the #3 spot, and now behind only Erik Seidel (#2) and Daniel Negreanu.

How It’s Stacked Up

There will be three big stacks and three small stacks when the final table gets underway. Colman’s chip lead is miniscule over Tony Sinishtaj (9,515,000).

As talented as this group is, none of them is a member of the WPT Champions Club. Mizrachi has come close, making his third final table appearance and will surpass the $1 million mark on the World Poker Tour regardless of how he finishes on Wednesday.

The Poker Showdown isn’t the only major WPT event going on at the South Florida casino right now. The Seminole Hard Rock Poker Finale, a $10,000 buy-in tournament, got underway on Sunday. Day Two began at noon EST on Monday, registration closed prior to the start of play.

There were 176 survivors after Day One out of the 332 entries. David Laka finished the day with the chip lead (223,200). Rainer Kempe, Cliff Josephy, Jason Koon, Jonathan Little, Tony Dunst, Mike Sexton, Jesse Sylvia, Joe McKeehen, and Bryn Kenney all successfully made it to Day Two.

After the Poker Showdown and Poker Finale Conclude, the only tournament left on the WPT Season 15 schedule will be the April 7 Tournament of Champions from this same casino.