Dan Bilzerian certainly has a large following on social media; in fact, he has more than 15 million fans hanging on his every post. But is that enough to make him the next US president? Well, if the man himself is to be believed, then the answer is a resounding “yes.” 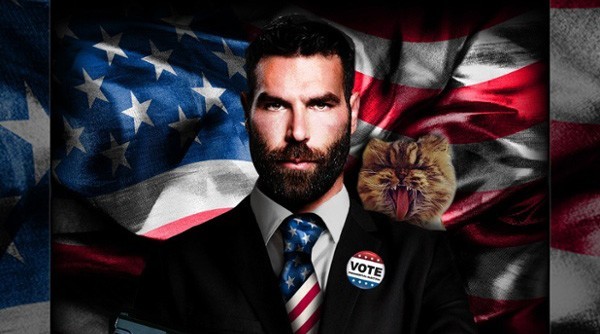 Subtle as ever, Dan Bilzerian’s over-the-shoulder icon seems appropriate in his 2016 presidential bid. We imagine he could at least get the swing(ers) vote. We’re here all week! (Image: rsvlts.com)

Although the Instagram icon’s presidential run may be something of a marketing ploy for his latest business venture, there’s a remote possibility that he may actually be telling the truth. Despite being known for his somewhat dubious views on, well, just about everything, Bilzerian certainly has friends in high places.

In fact, just a few weeks ago the bearded poker player was pictured showing another presidential candidate, Rand Paul, the secrets of betting and bluffing. Although the two were playing an exotic variant of the game known as Liar’s Poker, the fact that Bilzerian is able to sit down and play cards with a somewhat more viable politician shows that he is not completely persona non grata on Capitol Hill.

To celebrate this supposed push for the hot seat in the White House, Bilzerian has launched his own array of t-shirts and tank tops bearing the slogan “Bilzerian ’16.” Call us psychic, but we bet we’ll be seeing some busty blondes modeling this apparel on his Instagram site in no time flat (that’s the time, not the models).

Campaign Launch Party of the Century

To bolster support for his presidential bid, Bilzerian is also hosting an exclusive evening of drinking and dancing inside New York’s Marquee nightclub. Appropriately dubbed the “Bilzerian ’16 Presidential Campaign Launch Party,” the event will take place on Wednesday, June 24, and give attendees a flavor of the millionaire’s policies.

While it’s highly unlikely Bilzerian will become the next leader of the free world, it would probably be a good thing for the poker community if he did. After all, he’s an avid fan of the game, and would probably have no problem backing a federal law to allow online poker across the US.

Of course, the odds of Bilzerian getting anywhere near the White House are about as long as Elvis returning from the dead and winning the 2015 World Series of Poker Main Event.

However, as is true in poker, with a chip on his shoulder and a chair surrounded by bodacious beauties, stranger things have happened.

“I’m Dan Bilzerian, And I Approve This Message”

Despite Dan Bilzerian being a rank outsider for the presidential spot, we thought we’d speculate on what his policies might be if he ever did assume control of the US:

Game On: Being an avid poker player, Bilzerian would have no issues making the game more accessible to people across the US both online and live. In fact, he may even introduce a law which states that every home must spread at least one home game per week, preferably with half-naked hot models sweating behind the players (see what we did there).

National No Clothes Day: Scroll through any of Bilzerian’s social media feeds and you’ll see that he’s an admirer of the female form. As crass and degrading as it may be, it’s possible Bilzerian would make at least one day a “no clothes day” for all females aged 18+.

Guns for Everyone: If there’s one thing Dan Bilzerian loves almost as much as girls and money, it’s guns. The owner of hundreds, if not thousands, of deadly weapons, Bilzerian would no doubt seek to make every US citizen as much of a gun nut as he is.