It doesn’t matter if it’s fact, fiction, or somewhere in between — a Dan Bilzerian poker story is always engaging for one reason or another. This week, the outspoken millionaire was back in the spotlight and talking about, among other things, poker on the More Plates More Dates podcast. 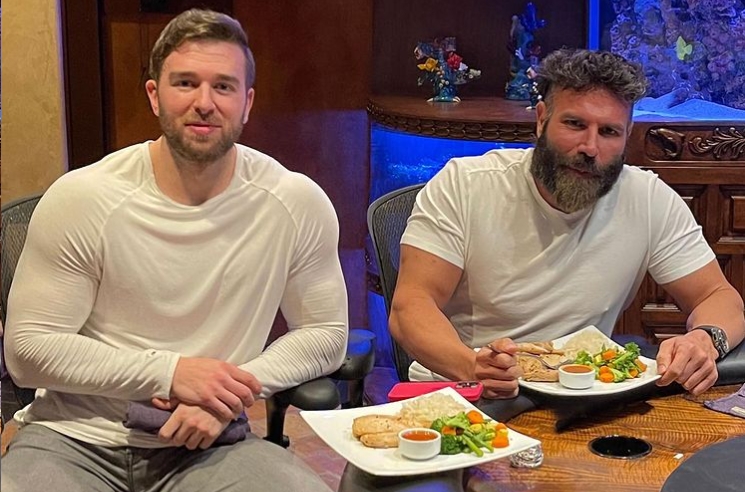 Dan Bilzerian talked about $700 million losses and the role of crypto in poker with Derek from More Plates More Dates. (Image: Instagram/@moreplatesmoredates).

Hardcore pros will often dispute Bilzerian’s authority to talk about anything even remotely linked to poker strategy. However, regardless of whether or not he actually made his fortune in high-stakes games, Bilzerian knows a lot of wealthy people.

And, as he revealed on the More Plates More Dates podcast, he knows a lot about their financial affairs. As someone who sits in private games with the likes of millionaire businessman Bill Perkins, Bilzerian explained how crypto has become the currency of choice for those with nosebleed bankrolls.

For context, More Plates More Dates is a YouTube channel primarily dedicated to fitness. Its host, Derek, had previously published a video on Bilzerian’s steroid protocol. That caught Bilzerian’s attention and led to a podcast posted on YouTube this week.

The two eventually get into fitness and girls, but not before Bilzerian provides some insight into the secretive world of high-stakes poker. The discussion was sparked by a question about cryptocurrency, which led Bilzerian onto the logistics of moving money around and, in turn, taxes.

Private games aren’t like those that take place in a casino. Bank wires are commonplace instead of cash or chips and, in Bilzerian’s words, that’s what “f**ked up” Andy Beal. Bilzerian recounted a story involving noted poker enthusiast and billionaire Beal and someone called Alec.

The mysterious Alec, reported to be private equity billionaire Alec Gores, won $700 million from Beal over the course of a year. Beal shipped the money to Alec via bank transfer, which meant Alec, who lives in California, was obliged to report his winnings as income. According to Bilzerian, Alec was subsequently taxed 50% on his $700 million win.

Crypto is the currency of choice for high rollers

Bilzerian also explained how he and his fellow high rollers used to struggle with getting enough cash for their private games. Bellagio chips were, for a time, accepted as a universal currency among the inner circle of wealthy players. That was until cryptocurrency became popular.

Today, “the whole gambling community has gone to crypto” because it offers instant settlements, Bilzerian said, adding that he’s been getting paid in crypto since 2013. Bilzerian said would often attend private games in Macau and people would pay their debts using Bitcoin.

The anecdotes lift the lid on what life is like in private, high-stakes games that are often shrouded in secrecy. Perhaps more interesting though, is the use of cryptocurrencies. The debates over the practical applications of Bitcoin et al have been raging since 2009. For a small number of well-bankrolled poker players, however, it seems that cryptos have become a useful replacement for cash.

To hear more about what Bilzerian has to say about cryptocurrency and high-stakes poker, listen to the full three-hour podcast.