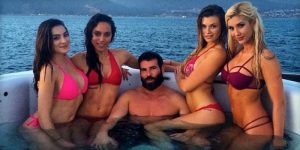 Man-about-town and multimillionaire Dan Bilzerian is facing charges related to possessing the components of a bomb or explosive device. (Image: jebiga.com)

Dan Bilzerian, the poker player, actor, and Instagram star known for his outrageous lifestyle, was arrested at Los Angeles International Airport on Wednesday on charges related to the possession of an “explosive or incendiary device.” The arrest was based on a warrant from Clark County, Nevada, which had been filed on November 13.

Bilzerian was initially held without bail, but has since been released and is scheduled to make his first court appearance related to the charges on January 9. A conviction on the felony charge could land him anywhere between one and six years in prison.

According to celebrity website TMZ, the criminal complaint against Bilzerian said that he had ammonium, aluminum powder, and ammonium nitrate mix, all components that can be combined to make a powerful explosive.

Until the time of his arrest, the warrant remained under seal, likely because there was an ongoing investigation into Bilzerian’s activities. It appears that the charges are related to a November 4 investigation by Las Vegas Metro Police into a field of debris in a desert area that followed an explosion in the same location.

Blowing Up the Internet

Blowing things up would be nothing new for Bilzerian, who has posted plenty of photos and videos of himself playing with some rather high-powered weaponry, including one infamous video where he’s driving a tank over a car. That background has led some to suggest that the components Bilzerian had might be used to create a custom-blend explosive similar to Tannerite, which is used for exploding targets.

So far, there has been little comment from Bilzerian about the incident. It appears as though the “King of Instagram” will be represented by Las Vegas lawyer David Chesnoff, the same man who is representing Paul Phua in the Caesars Palace illegal sports betting ring case.

Chesnoff says he has yet to meet with Bilzerian, but plans to look into the charges. “We’re looking forward to having this resolved in court,” he said.

Another man on the same flight, Jeremy Guymon, was also charged with the possession of bomb-making components, and will have the same court date.

Dan is the son of Paul Bilzerian, a corporate raider who was convicted of securities fraud in 1989. Along with being the beneficiary of a trust fund,  Bilzerian the younger is also known as a poker player.

In 2009, he made a run to 180th place in the World Series of Poker Main Event, which earned him significant air time on ESPN. He has also been involved in high-stakes underground poker games that included famous players like Tobey Maguire and Gabe Kaplan.

Bilzerian has also had an acting career, appearing in films such as Olympus Has Fallen, The Other Woman and The Equalizer. He’s also spoken in the past of his military career, in which he apparently entered training to become a Navy SEAL, but did not complete the program.

He claimed that he was not as fault, as Hustler was the event organizer. And in August, Bilzerian was thrown out of a Miami nightclub after kicking a woman in the face during a brawl.