Dan Bilzerian Calls Out Americans for Being Scared of Terrorists 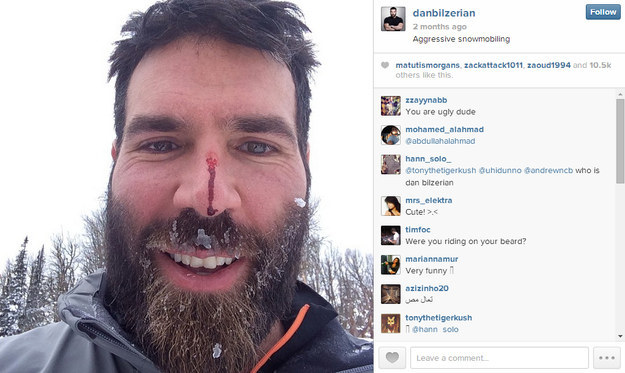 Dan Bilzerian has called out Americans on Twitter for being afraid of terrorists in one of many somewhat odd and nonsensical rants. (Image: BuzzFeed)

Let us preface this Dan Bilzerian tale by saying it has very little, if anything at all, to do with poker, except for the fact that our boy has played the game before. With that caveat, we shall proceed.

Dan Bilzerian, playboy par excellence, has more than one million Twitter and Instagram followers that know all about his party lifestyle. That includes a love of guns, high stakes poker games, and the numerous women he has allegedly slept with.

Now they know what he thinks about Americans and terrorists. Bilzerian took to Twitter to call out Americans for, what he suggests, is being afraid of these fanatics. His words were a bit less PG, however.

The man referred to as “Blitz” says he isn’t afraid of terrorists and thinks people need not fear joining the military because the odds are far greater, nine times he claims, to die of an insect bite than of getting killed in combat.

Of course, those comments come from a man who once got kicked out of the Navy while attempting to become a SEAL, following four years in the military. We’re also not sure what his comments actually have to do with the price of tea in China, but that’s our boy Dan for you.

Bilzerian was booted from the special operations force just a few weeks prior to graduation. He got into an argument with one of his administration officers for an unknown reason, and was then honorably discharged from the Navy.

His post on terrorism didn’t go over well with everyone on Twitter, needless to say. One follower slammed the former Navy SEAL trainee by calling him a “loser” who “didn’t make the cut.”

One commenter came to Bilzerian’s defense, though, suggesting Americans need to stop letting others walk all over them because the American way of life is offensive to terrorists.

Bilzerian is a controversial social media figure, to say the least. Posts such as the aforementioned terrorism rant are common from the self-proclaimed “Bill Gates of Poker”.

Following the mass killings in Paris last month, Bilzerian used Twitter as a platform to express his displeasure with how the media controls people’s lives.

His rants on political and social issues isn’t the only reason he has one of the largest Twitter followings in the world. Blitz also loves to show off his 90-plus guns and hundreds of curvy women he claims to sleep with.

In 2009, Dan Bilzerian made a brief but memorable appearance at the World Series of Poker. His aggressive style of play entertained many.

His chip stacks during the Main Event was as consistent as Mike Matusow’s bankroll. He went back and forth from short stack to large stack numerous times.

His claim to fame as a poker player is as a high stakes cash game star. Allegedly. Bilzerian has said many times he made over $50 million in poker cash games.

Others have refuted this by saying he inherited the bulk of his money from his father, Paul, a former convicted felon that still allegedly owes nearly $60 million from a scam he was sent to prison for in 1989.

The elder Bilzerian has been accused, on many occasions, of allegedly hiding money to avoid paying off the government.

There is no proof any of the money owed to the government was given to his son.

This guys lifestyle would make anybody jealous but he’s a clown.