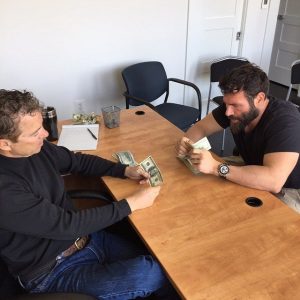 Dan Bilzerian, the man often reviled by many members of the poker community, could turn out to be an unexpected hero thanks to an affinity with presidential candidate Sen. Rand Paul.

While the two public figures may be worlds apart in their roles in life, they seem to share an affinity with poker as evidenced by a recent series of social media posts.

Although the game Bilzerian and Paul were pictured playing wasn’t poker in the strictest definition of the word, the high stakes activity contained many similarities to Texas Hold’em.

The first indication of Bilzerian and Paul’s connection came after the former posted an image on Instagram of the two holding a collection of $100 bills.

Further details from the heads-up showdown quickly followed courtesy of the Daily Caller’s Kaitlan Collins who managed to obtain a Snapchat video of pair trading bluffs in a game of Liar’s Poker.

While the association between the Republican Party king and the prince of parties was enough to capture the attention of mainstream media outlets, it also has some major significance for the poker industry.

Bilzerian may cause some members of the poker community to recoil in horror, but he has a huge online following and that has two man benefits for Paul, moreover, our industry.

1. The public alignment with the social media legend seems to be a conscious effort by Paul to connect with a young audience.

2. The decision to play a form of poker will further endear Paul to gambling fans in the US; especially those against the Restoration of America’s Wire Act (RAWA) and the Senators, such as Lindsey Graham, that support it.

Positives for Paul and Bilzerian

Although there is a long way to go until the next US President is named, Paul’s apparent positive stance on poker could benefit the community by raising its profile and legitimizing it as a credible industry.

In fact, in a recent interview, Paul said that he wasn’t in favor of an outright ban on online poker in the US and that the government “should leave [the game] alone.” This comment, along with Paul’s opposition to RAWA supporters and potential White House candidates such as Graham, could further swing the pendulum of public opinion towards the community.

As for Bilzerian, his recent brush with Paul appears to be yet another step towards repairing his broken public image. Following a series of undesirable incidents at the close of 2014, Bilzerian has attempted to win back the affections of the public by doing his bit for charity.

Held in aid of brain research, the event raised thousands of dollars for charity and went some way to helping repair the millionaire’s battered reputation.

Although not a regular variant of poker, Liar’s Poker is a game that requires players to try and bluff each other using the serial number on bank notes.

By stating a bid, the players then trade numbers and the goal is to convince their opponent that your bid does not exceed the combined sum of all the serial numbers on their bills.

The same skills that can be used in poker can be directly applied to Liar’s Poker, so if Paul is a fan of this game then he’s likely a fan of the real version of poker as well.