Poker players in Dallas, Texas, are worried that they’ll have to find somewhere new to play after city officials informed several poker room operators last week that their occupancy permits have been revoked. 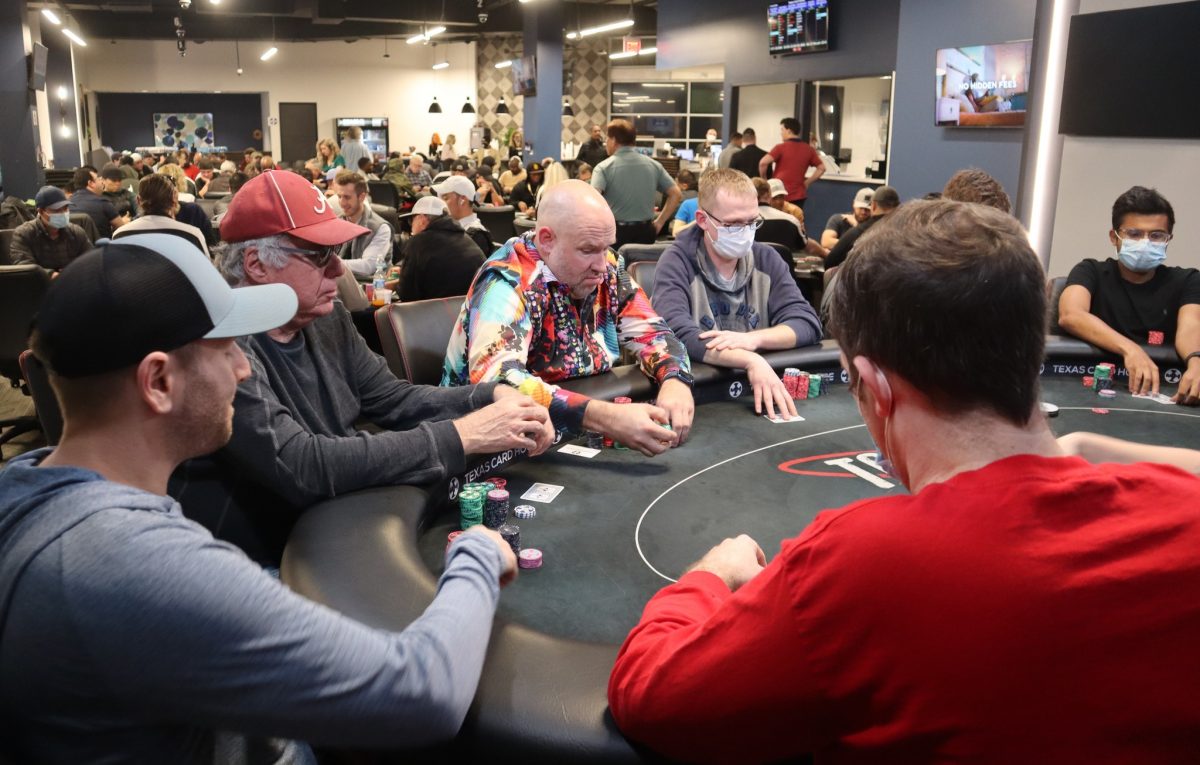 Players at Texas Card House in Dallas may have to find a new spot after the city yanked the permit that allowed them to operate legally. (Image: Facebook/TCHDallas)

Dallas City Councilwoman Cara Mendelsohn is leading the charge against these businesses she says are illegal. She posted on Facebook Friday:

“The City of Dallas’ building official has revoked the certificate of occupancy for all poker rooms,” Mendelsohn wrote. “All can be appealed. The issue is poker rooms are illegal under Texas law. At some point there will be a lawsuit, either the operator suing the city or the city suing the operator, or Texas will legalize gambling.”

Representatives of Shuffle 214 and Texas Card House confirmed they received letters from the city’s Building Inspection Division at the end of December notifying them that their permits were being pulled for violating Texas Penal Code 47.04, “Keeping a Gambling Place.” Neither the Poker House Dallas nor the Hideaway Poker Club could be reached to confirm they received letters.

Occupancy certificates have been pulled even though both poker room companies were crystal-clear about the type of business they would operate when securing the permits and approval from Dallas’ city council and its Building Division.

For the Texas Card House’s Dallas location, the process took more than two-and-a-half years of meetings with council members, city attorneys, zoning officers, neighbors, and even the police. Yet the rooms still face extinction.

“Even if you don’t know about poker, most people agree what they’re doing to us is just wrong. It’s unethical,” Ryan Crow, CEO and co-owner of Texas Card House Dallas, told CardsChat. “When we moved in there, it was not in the cover of darkness, and we had their permission.”

The rooms remain open as they appeal this move that Crow said “blindsided” the card room staff and players. The appeal hearings will take place in front of the Board of Adjustments during the third week of February. If the five-member board rejects the appeal, both Texas Card House and Shuffle 214 will sue.

Operating above-ground in the gray

There are more than 50 poker rooms operating in strip malls and shopping centers across Texas, but poker sits on the edge of legality, and the law is always up for interpretation by local lawmakers. Since 2017, poker rooms have attempted to operate openly as “social clubs,” skirting gambling restrictions because a rake is not taken from the pot. Instead, the card rooms charge membership fees and an hourly seat rate.

Dallas City Attorney Chris Caso told the council in January 2019 that he believed the clubs were indeed operating within the bounds of Texas law. The council rejected the Texas Card House’s application for a special use permit at that meeting, but approved it a year later, allowing Texas Card House Dallas to open in 2020.

Crow said although the process was time-consuming,  he was thrilled with how open and responsive city officials were to his team.

“I was on Cloud 9 because I never had so much engagement from a city. They were extremely collaborative. If you asked me six months ago, I would say Dallas has been the most easy to communicate with and the most supportive city when it comes to our business,” Crow said. “When this happened, I was just blown away.”

Shuffle 214 went through a similar, time-consuming, and in-depth process in 2020 when securing their certificate of occupancy with the city. That club opened in June 2021. “We were very specific every step of the way. We’re going to be a social club operating as a poker room. We’re going to spread poker games, and here’s how we’re going to do it,” said Ross Carroll, Shuffle 214’s General Manager. “It’s a lengthy and tedious process.”

A process that both Crow and Carroll believe was done on the up-and-up, honestly, professionally, and with great concern to transparency. Lawyers were paid handsomely, Carroll said. 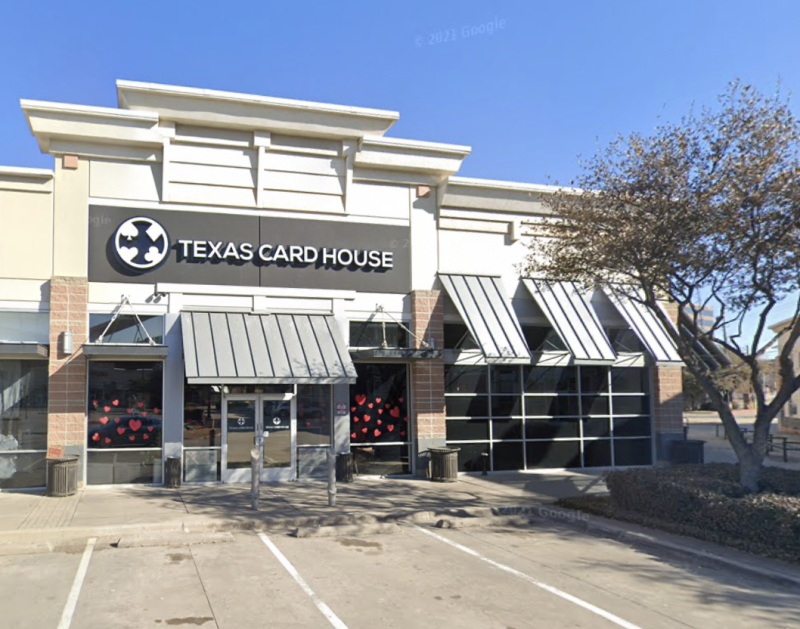 The Texas Card House in Dallas is one of the local poker rooms that may be forced out of business. (Image: Google maps)

Last summer City Attorney Caso changed his position, or at least his legal interpretation. He told CardsChat via email that he can’t comment on the latest developments.

Since state officials and lawmakers have refused to clarify the penal code and build a framework of regulation for the poker industry in Texas — something both Carroll and Crow are for — local bureaucrats can interpret the laws the way they want, and pull permits.

City councilman Omar Narvaez represents the neighborhood in which the Texas Card House operates, and is in favor of the room. He told the CBS affiliate in Dallas he’s befuddled by the change of events. “I think it’s unfair that all of the sudden all of these COs (certificates of occupancy) for all these card rooms have suddenly been revoked,” he told the news station. “Unfortunately our city attorney has decided to change the idea of what he believes constitutes card rules according to the law.”

Narvaez didn’t return a request from CardsChat for comment.

Visit Councilwoman Cara Mendelsohn’s election page on Facebook, and it’s clear as to where she stands in regard to poker in her city — she wants it gone. In her eyes, poker is a game that attracts violent people. She cites cases in her district from last summer when a man was shot and killed over a $7 pot in an underground poker game, and another in which a man had his throat slashed before his assailant cashed out his chips.

(Poker player commenters claim these stories as she tells them are riddled with inaccuracies.)

During this time, Champions Social, which operates a poker club in Houston, was trying to open a room in Dallas. According to Carroll, they picked the wrong neighborhood and were unsuccessful.

“It was basically in too nice of a part of town,” he said.

The proposal prompted a series of petitions and protests by the residents of Bent Tree North, where million-dollar homes are common and sit right behind the poker club. “To them, they’re lumping us all together. Underground room, poker room, it’s the same thing. That neighborhood, they’re freaking out, they think we’re bringing hell to their front door or something,” Crow said.

Houston-based Champions Social was denied permission to open a branch in the Bent Tree North section of Dallas. (Image: Hospitalityonline)

With the city’s attorney opinion in hand, the Building Inspection Division began the process of essentially evicting the other poker rooms, even though it gave them permission to operate not so long ago.

“The city made a commitment to us. We took the time to meet with them and explore all the stuff with them and then without any warning, they changed their story,” Crow said.

Mendelsohn did not respond to a request for comment.

When the Texas attorney general refused to clarify the law surrounding the legality of poker in 2018, he left it to each city and each jurisdiction in the state to interpret the penal code concerning poker in its own way. Following the latest developments in Dallas, it may now be up to the courts to decide this issue.

Although he believes he has a good chance of winning his appeal in February, Crow says he’s really not sure what’s going to happen. He knows his company will fight to stay in Dallas, no matter what happens next month.

Crow and his partners also run Texas Card House in Austin, and this move by Dallas to shut down the poker clubs highlights just how shaky legal poker is in Texas. When asked if what’s happening in Dallas could occur in other parts of the state, Crow expressed concern that it could.

“I’ll be honest, six months ago I had no worry that this would happen to me in Dallas. Right now, it seems to be isolated in Dallas, but you never know,” Crow said. “I mean, if it breaks out that Dallas shut us down, will other cities start looking at this and say ‘Well, wait a minute, we need to rethink this?’ I don’t know.”