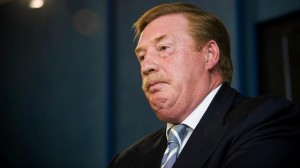 Bad Beat: Tasmanian ex Premier Paul Lennon was escorted from the Crown Casino in Melbourne by a phalanx of security guards, his wrists bound with cable ties. (Image: AAP)

It was probably not the finest moment of the former Premier of Tasmania Paul Lennon’s career when he was hurled out of the Crown Casino in Melbourne earlier this week after becoming “tired and emotional” at a poker game.

According to witnesses, the Australian Labor Party politician became enraged when a woman apparently “touched his chips,” although he himself disputes this. Whatever the reason for the meltdown, witnesses described Lennon being marched out of the casino by a phalanx of security guards, his wrists bound with cable ties. Talk about full-blown monkey tilt.

An unnamed witness claimed that Lennon began behaving aggressively towards the woman who had touched his stack and repeatedly ignored pleas from casino staff to calm down. He apparently refused to leave the premises and attempts by security staff to remonstrate with him were met with persistent cries of, “Do you know who I am?”

Of course, Lennon has his own version of events and has attempted to play down the incident as “ridiculous” and a “misunderstanding.” He says the argument began when a dealer insisted that he had infringed the casino house rules by licking his index finger before looking at his cards.

“At one instance I licked my index finger before touching my dealt cards, as you sometimes do. But apparently this is against the rules, something I was not aware of. For this I was removed. I questioned the reason why, but was not given an answer.”

Melbourne Police confirmed the incident, adding that the politician had been issued with a penalty notice for failing to leave a licensed premise, which carries a fine of $739. Lennon claimed that he himself asked for the police to be called “so that everything was done properly.”

To Crown it All

Lennon served as the Premier of Tasmania, an island state that is part of Australia, from 2004 to 2008, before mounting allegations of corruption and plummeting popularity in the polls forced him to resign. Nor is this is the first time he’s landed himself in hot water at the Crown. In 2006, he was accused of impropriety by the Australian media after it emerged that an A$200 per night room he’d booked was magically upgraded to a six-star A$600- per-night room.

The Crown Casino is owned by James Packer, of course, who also happens to have a 50 percent stake in Betfair‘s Australian operations. Just days after Lennon’s swanky upgrade, the government granted Betfair A$700 million Internet gaming license.
Of course, Lennon shouldn’t be too red-faced at the pickle he’s found himself in; he now joins a long list of luminaries who have been 86’d from casinos, including Ben Affleck, Lil’ Wayne, Paris Hilton and the boy band One Direction.