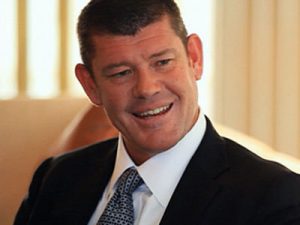 James Packer is good at many things, and one of them seems to be asserting his male dominance when the mood hits.

Known for a brawl or 10, Packer has once again lived up to his fist-to-cuffs reputation, this time (allegedly) with a lowly security employee.

And as Melbourne’s Crown Casino readies for the 2016 Aussie Millions, Packer proved the house always wins when you cross the boss.

According to various news outlets, Packer was involved in an incident with a Crown Casino employee on New Year’s Day after the latter failed to recognize his boss. Whoops.

After visiting his flagship property, the billionaire casino owner and fellow senior Crown executive Ishan Patnam made their way across the casino area towards an enclosed area.

You can imagine how well that went down with Mariah Carey’s boyfriend.

Although the employee had been told that a VIP was heading his way, Chaban didn’t recognize Packer and admitted that he refused to let him into the private area.

Unhappy at the 60-year-old security guard’s actions, Packer then allegedly shoved the security guard and shouted at him before continuing on his way.

In response to the story, the Crown Casino’s PR department confirmed that a “minor incident” had taken place, but claimed it was nothing more than a misunderstanding.

“A contract security officer failed to recognize Mr. Packer and moved in front of him to attempt to physically block him from entering the casino and causing a collision. It’s understood that a verbal altercation ensued and Mr. Packer continued into the facility,” read a statement from the Crown Casino.

Misunderstanding or not, Chaban was temporarily suspended, but later reinstated after an internal review.

Although this latest incident is one the Crown Casino has been intent on downplaying, it’s not the first time Packer’s temper has captured the headlines.

Back in 2014, the Aussie casino owner was seen fighting in the street with his then-friend, David Gyngell, a TV executive.

Crown is of course considered to be one of the top poker venues in the world and its facilities will once again be host to the Aussie Millions, which start tomorrow (which is already today in Australia).

Although many of the world’s top players are currently fighting for cash at the PCA (PokerStars Caribbean Adventure), many will soon be flying to Melbourne for the top Aussie Millions events.

Naturally, the AU$10,000 ($7,000) Main Event will be the star attraction and, when the action gets underway on January 24th, Aussie Millions stalwarts such as Phil Ivey, Patrik Antonius, and defending champion Manny Stavropoulos should all be in attendance.