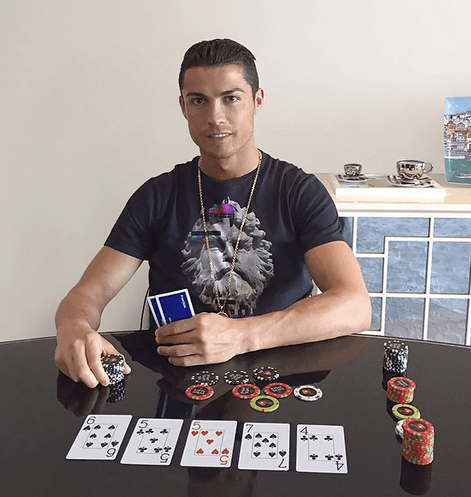 Following this image post to his social media earlier this week, many are wondering if soccer megastar Cristiano Ronaldo is perched for a PokerStars sponsorship offer. (Image: Instagram/Cristiano Ronaldo)

No, soccer star Cristiano Ronaldo isn’t already a sponsored Team SportStars athlete for PokerStars. That would be Ronaldo, a retired Brazilian soccer legend that has scored the second-most goals of anyone in the history of the World Cup and who has been on the PokerStars roster since 2013.

But the younger Ronaldo is now rumored to be on the verge of a PokerStars Team SportStars deal as well.

After scoring three goals for a hat-trick over the weekend in his team’s 3-2 win over Sevilla, the footballer took to another game, poker, and landed a full house in a mysterious game against an unnamed opponent.

Though he didn’t mention who he was playing or what the opponent’s hand was, the fact that Ronaldo was using what appear to be PokerStars-branded chips has many in the poker world speculating that he might become the newest member of Team SportStars.

Can PokerStars Afford Him?

According to Forbes, Cristiano earned $80 million in 2014, putting him second behind only Floyd Mayweather, the undisputed boxing champ who snagged more than $100 million last weekend alone in what many described as the ineptly named “Fight of the Century.”

His career success has led many to wonder whether PokerStars can afford that type of celebrity, but the deal might not be about the money for Ronaldo, a man who seemingly has it all. In fact, poker seems to be a release for the superstar.

In 2010, iPoker specialist Dan Cates, more commonly known as “jungleman12” on Full Tilt, said he received a call from Cristiano asking to play pot-limit Omaha. “He contacted me, and we talked for a bit before deciding to play,” Cates revealed.

“We were just mostly playing for fun,” Cates said of the $1-$2 pot-limit session. “He beat me for about eight buy-ins. I was thinking, ‘Wow, I am getting destroyed by this guy and he hardly plays.'”

Estimated to be worth upwards of $500 million, it’s safe to say that Ronaldo’s poker bets of $1 and $2 are purely for pleasure rather than financial gain. Often criticized for what have been deemed prima donna tendencies and for being slightly conceited, landing a sponsorship deal regardless of money from the world’s leading poker network might just appeal to the player’s ego even more than his wallet.

Sponsorships by the Numbers

Ronaldo makes a rather nice living on the pitch, and on top of that his endorsements can also certainly pay the mortgage for just about any house in the world. Just last June, he signed a $15.7 million-a-year contract with Nike.

That contract was preceded by an $8.1 million-a-year deal, also courtesy of Nike. Perhaps more impressive to his female fans, Ronaldo replaced David Beckham (who just turned 40) as the face of Armani in 2010, and for the guys, he has a multimillion dollar deal in place with motor oil producer Castrol.

In fact, he’s so rich, he rejected a $3.35 million offer for a one-day photo shoot, because it conflicted with his training. His management team says it declines nearly 90 percent of even reasonable endorsement offers for the mega-sports star.

Yes, should PokerStars bring its second Ronaldo on board, it will certainly be something Cristiano desires. Rafa Nadal may have to get ready to play second Ronaldo fiddle on Team SportStars; stay tuned.