Soccer megastar and PokerStars ambassador Neymar Jr. could be in hot water with his poker sponsor after his 2016 Rio Summer Olympics gold medal celebrations this past weekend got a little too excessive. 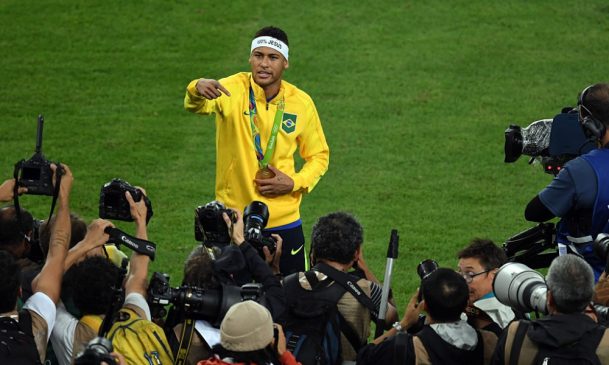 Oh, behave! Soccer superstar Neymar Jr. got into it with a fan on Saturday after his Olympics match. Could it affect his PokerStars sponsorship? (Image: Martin Bernetti/AFP/Getty)

After scoring the pivotal penalty that sealed the gold for Brazil at the games on Saturday, Neymar joined his teammates for a celebratory lap of the pitch. As expected, the home crowd was in a jubilant mood, but one supporter appeared to have an issue with Neymar.

Gesturing in the direction of the Brazilian forward, the man eventually did enough to capture Neymar’s attention. Seemingly infuriated by the gestures, Neymar unleashed a verbal tirade in Portuguese, and the situation got heated enough that the stadium’s security personnel quickly pulled him away from the fan.

One might think, in the wake of the Ryan Lochte scandal that dominated the last week of the games in the news and cost the American swimmer all of his major sponsorships, that other athletes would be on their best behavior. But apparently, not so much.

Unfortunately for Neymar, the incident was caught on video by Brazilian news site revistaceara.com.br. According to rough translations of the exchange, the soccer star implied something about taking it somewhere else, and added that this is “f**cking Brazil.”

As quickly as it started, the argument was over, but it’s clear Neymar wasn’t happy with what took place. Nor is this the first time the young player has been involved in an altercation with a fan. Playing for Barcelona in the Champions League back in 2015, Neymar made his way over to a Manchester City fan who accused him of diving.

Much like the incident in Rio, words were exchanged before Neymar was pulled away, and that was the end of it that time.

Another minor scandal last week involved the player wearing a “Jesus 100%” headband at the Summer Games, which some fans said was against IOC policy. A photograph on revistaceara.com.br, showing Neymar wearing the headband and kissing a young male fan, drew plenty of comments from readers on the site.

So now the question begs, could any of this behavior get Neymar into hot water with PokerStars, who has the athlete featured in various spots and as a major force on its sports star division?

Code of Conduct in Place

Well, the answer is: it might. The online operator has a history of enforcing codes of conduct on both its sponsored players and those who take part in its live events.

In 2014, PokerStars’ Head of PR Michael Josem told forum users that a player’s online actions could exclude them from playing events such as the European Poker Tour (EPT).

“PokerStars and the European Poker Tour agree with the general principle that we should use what we know about online activity to also enhance the integrity of our live events,” Josem wrote on 2+2. While that comment clearly alludes to incidents of online cheating, versus real life misbehavior, there are precedents banning the latter as well.

One such player who got canned was Dale Philip, known as Daleroxxu, after a soccer-related outburst. Granted, he was watching a soccer championship, not playing in one, but it illustrates that PokerStars does track the public behavior of its sponsored pros.

Philip was a member of PokerStars Team Online when he possibly imbibed a bit too much and got overly rowdy during the 2014 World Cup. Watching the Spain vs. Netherlands match with a crowd of PokerStars qualifiers, Philip appeared to swear at the Spanish fans after Robin Van Persie scored.

After evidence of the blow up was posted online, PokerStars made the decision to part ways with Philip.

While Neymar is arguably a far more important asset to the team than Philip was, his latest incident certainly doesn’t appear to be in line with the site’s code of conduct.