The 10 Coolest Bars In Vegas

I hate clubs. If you’re a club person, don’t mind paying two grand for bottle service, and have a brand new, $300 shirt that you just have to show off, cool, but it’s not for me. I’ll stick with a classic bar with old school cocktails, a dive with graffiti on the bathroom walls, or a proper Tiki bar with shrunken heads and rum drinks the size of basketballs. I guess I just prefer something with a bit more character*. 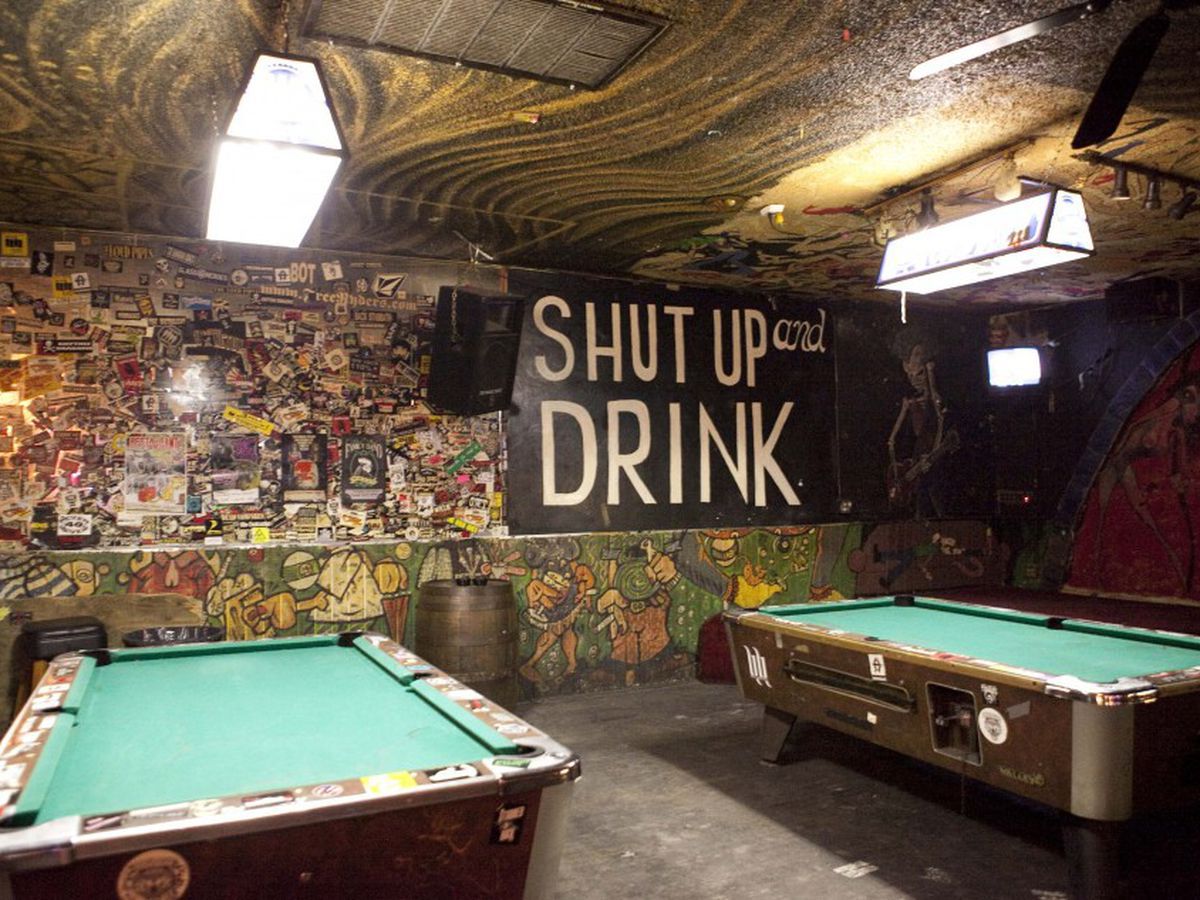 The best bars have the simplest rules. (Image: Eater Vegas)

If people are drinking fine bourbon or Pabst Blue Ribbon, I’m in. If they’re drinking vodka and soda, I’ll see you later. If the music is chill, I’ll have a seat. If the DJ is loud, I’ll find the door. And I’m sure as hell not waiting for hours to get in. No bar has ever been that cool.

The Double Down Saloon

I think it’s only fair that the Double Down Saloon gets the first mention. It’s one of the coolest dive bars, not just in Vegas, but in the world. This is a no-frills place in the city of frills, a real spot in a city where every landmark is fake. And the drinks are cheap. 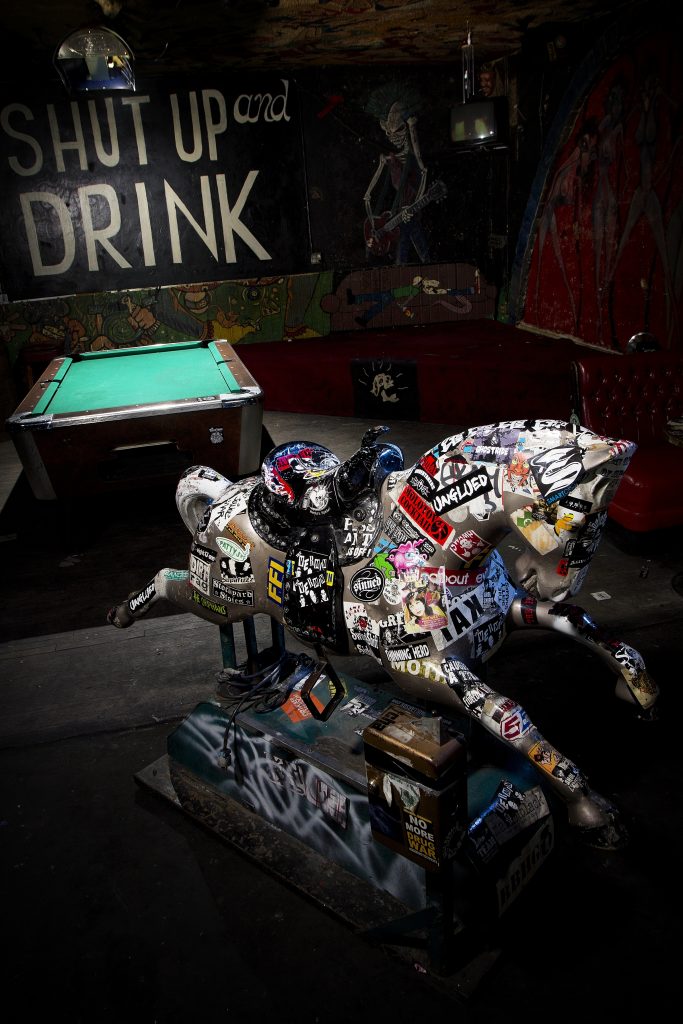 Everything is covered in graffiti and stickers from punk rock bands, and the patrons are mostly covered in tattoos, but you don’t need to be a rock and roll badass to enjoy the place. It’s friendly and pleasant. As long as you’re drinking, and not being a jerk, you belong.

The live music most nights varies from good old punk rock to experimental jazz, but the bartenders never change. Grab yourself a PBR, a twinkie, and a shot of ass juice (their signature drink), and you’ll be singing along to songs you’ve never heard before, or shouting out Ramone’s lyrics along with the band. Open 24 hours, but I recommend leaving before 6 am. Walking out into the light of day drunk is not a great experience. My hangover lasted three days.

The Sky Bar At Waldorf Astoria

And now for something completely different. From the least classy dive bar in the city to the most expensive lounge in a town filled with $20 cocktails.

This one. This is the best cocktail I’ve had in two years. Fantastic. (Image: Sky Bar LV)

The last time I was at the Sky Bar, I was standing three feet away from Dave Chappelle. This is where the ballers go to pay absurd prices for amazing drinks with a great view of the city. The drinks are some of the best anywhere and the ambiance is modern and classy. Expensive, sure, but worth it when the blood orange foam on top of your cocktail actually tastes like heaven.


Geek bars are popping up all over America these days, and this is one of the best. Let your inner geek out and show up in costume if you want, no one will bat an eye. 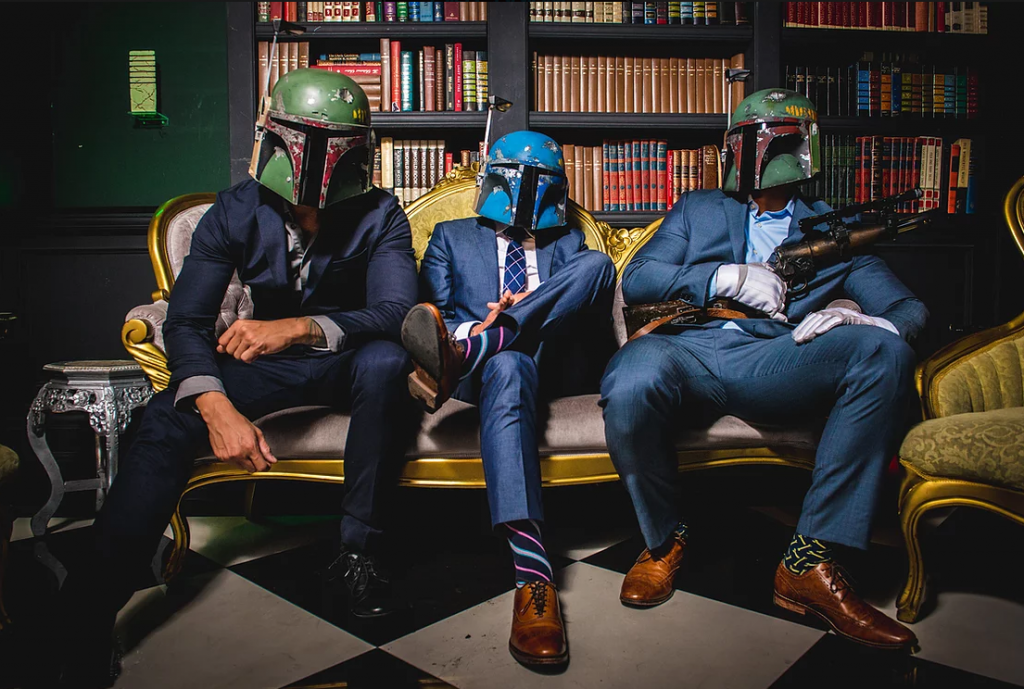 Do you think this is a fettish for these guys? I’ll see myself out. (Image: Fandom Bar LV)

There are games, and the walls are covered in art and relics from your favorite sci-fi, fantasy, and video game characters. The food and drinks are solid and the atmosphere is welcoming. If you’re a serious geek, you don’t need to know anything else, you’ll be home when you walk in the door.

Dark, moody, black leather and wrought iron. A fireplace. A goth girl in the corner and a tattooed badass in leather pants slinging drinks. The Griffin is that place. 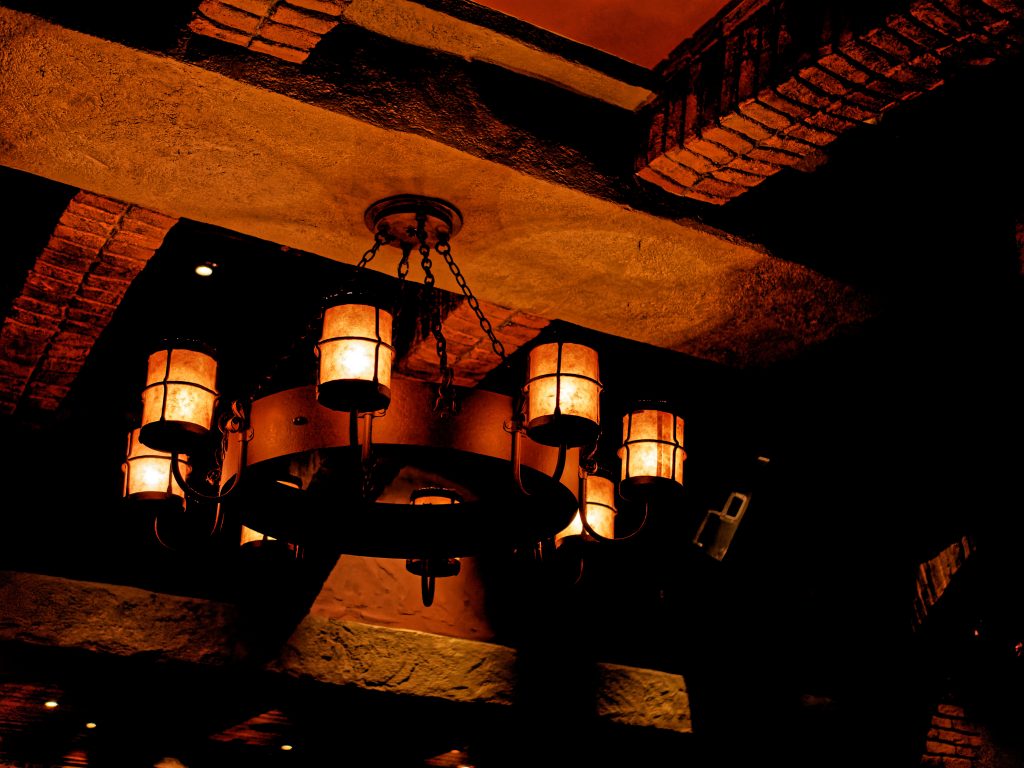 The chandelier is as cool as everything else in The Griffin. (Image: Chris Wallace)

A great liquor selection and solid bartenders, especially if you like American whiskey. The music is never too loud, and always good. Located at the end of Fremont street, it’s a great place to stop and chill if the craziness outside gets to be a bit much. Sit, talk, drink — no hurry — and leave when you’re ready to go back out into the real world again, which is usually after a few bourbon cocktails.


This one is a real sleeper, a place mostly known only to locals. I actually found out about it from a bartender in Montana in the middle of nowhere who works here for a few months every year. 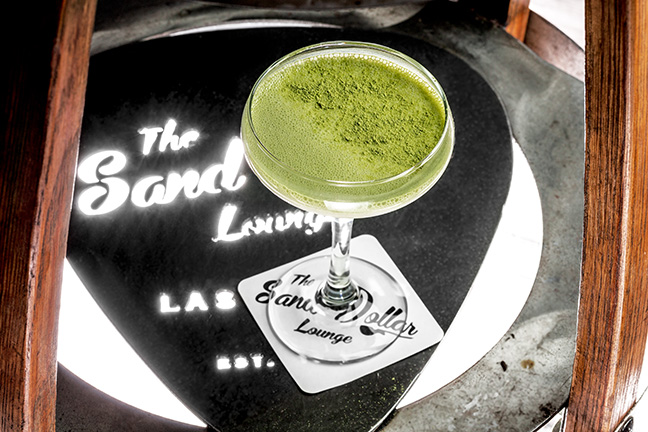 The Sand Dollar is the home of the blues in Vegas, and Mick Jagger and Muddy Waters used to drink there. That’s about all I needed to hear to know that I was going to love the place.

Great cocktails, great ambiance, and out-of-this-world live music on a nightly basis are all why the Sand Dollar Lounge was inducted into the bar hall of fame in 2016 and has won at least a dozen other awards over the years. Get yourself a Lupita or one of their specially paired shot-and-a-beer specials and relax for a bit. The cocktails are way better than you expect. The artisan pizzas are solid too. And neither the drinks nor the chow will leave you broke.

A fairly new addition to our fine city, The Commonwealth manages to feel like it’s been here forever. 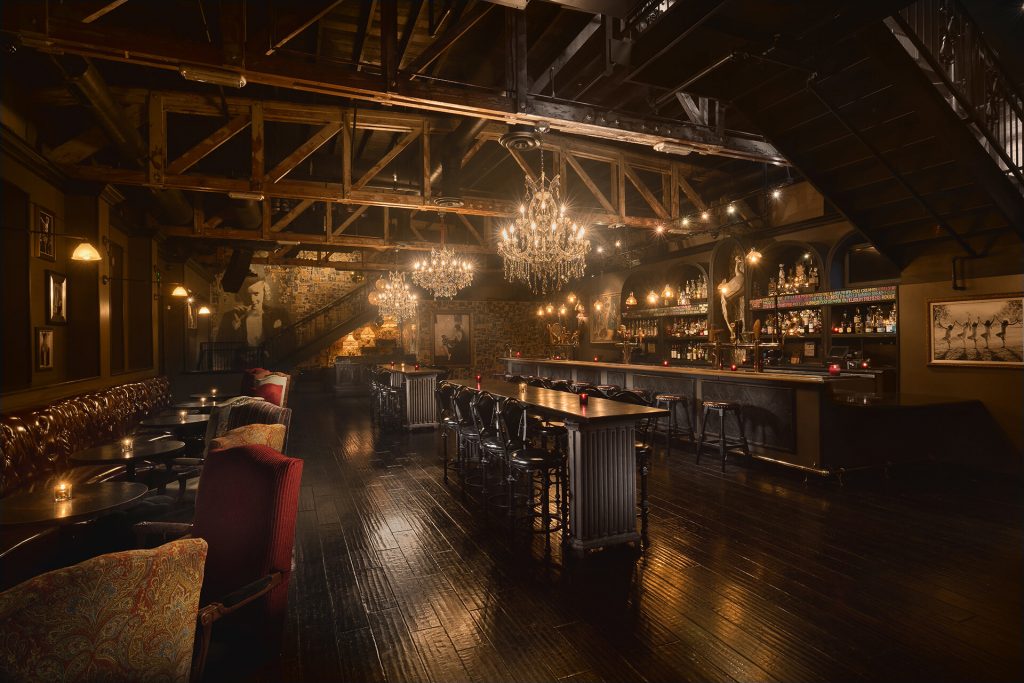 As classy as it gets. (Image: Commonwealth LV)

It feels like the ghost of a bar from 1946 with all the modern conveniences they never had, including an absolutely incredible sound system that pumps out a perfect compliment to the vintage ambiance night after night.

Craft cocktails as good as any on this list, a super cool interior, and even a rooftop that overlooks Fremont street. Also the only place in town where you can get a drink served on a mirror with finely chopped lines of cinnamon, brown sugar, and white sugar that will bring back memories of Vegas trips during your wild years.

Area 15 isn’t a bar exactly, but there are some amazing bars inside. What is Area 15? Uh … that’s hard to explain. 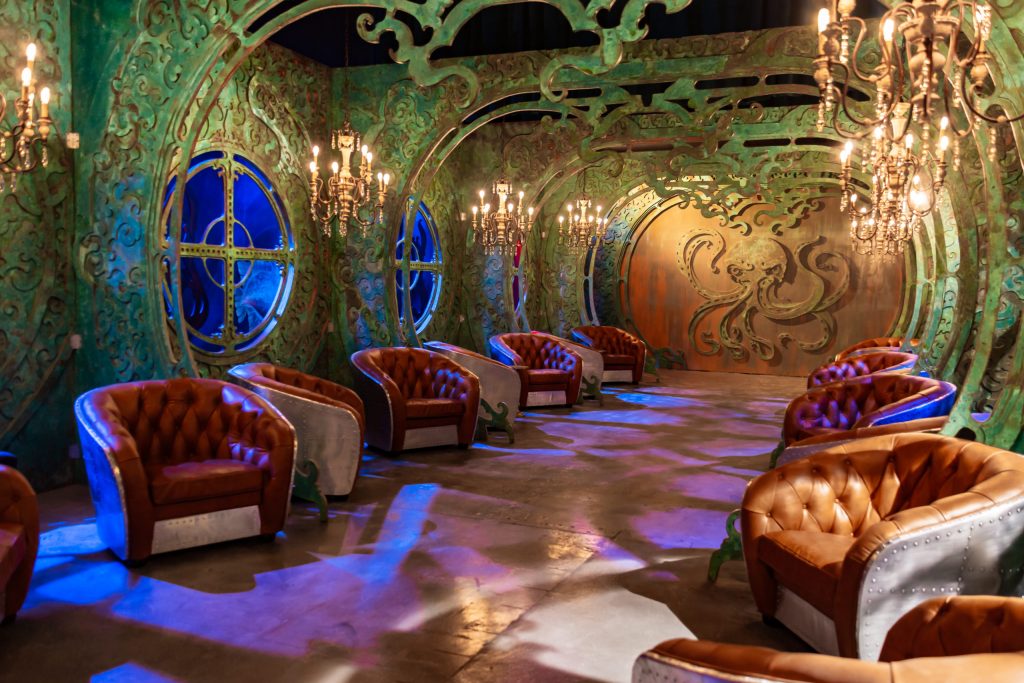 It’s like a crazy artist’s playground filled with rich experiences and weirdness. Like Alice In Wonderland if Wonderland was in Vegas and Alice was a swimsuit model in a clown suit.

Make sure to check out the Lost Spirits Distillery and buy tickets for their tour well ahead of time. Entry to Area 15 is free before 10 p.m., but you may need reservations anyway. Enjoy your submarine ride while you sip high-end whiskey and then go shopping in a very odd grocery store. It’s all part of the experience at Area 15.

Frankie’s is legit. The lanterns are made from real pufferfish and the drinks are served in Tiki mugs. 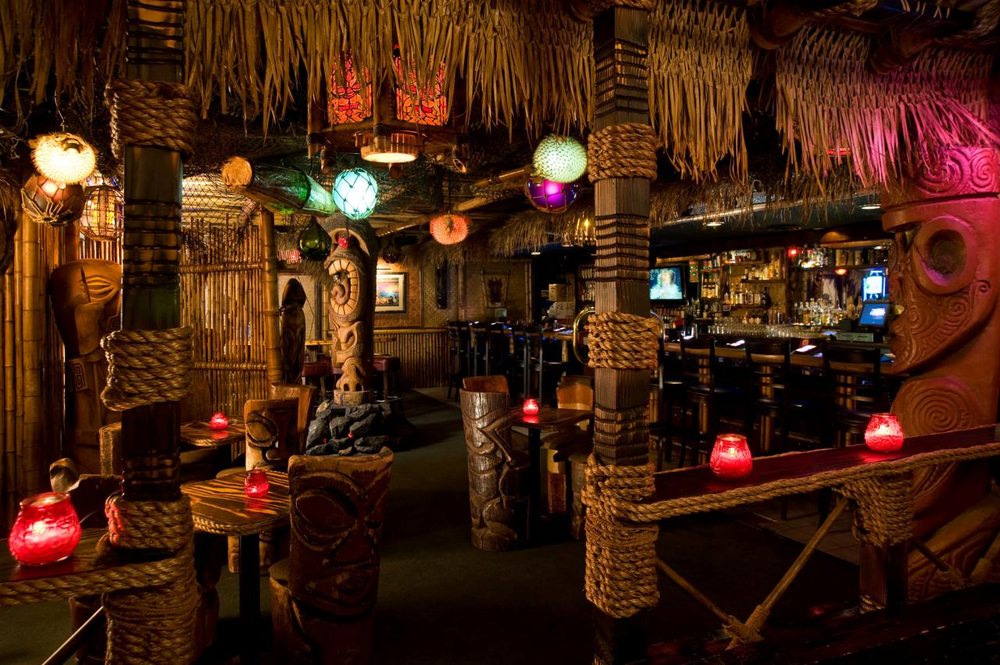 And this isn’t a new place trying to lure hipsters with kitsch from a golden age. Frankie’s is one of the few surviving Tiki joints from when they were popular generations ago. They were so good they just stayed open all these years, and now Tiki is cool again.

The drinks are delicious, fruity, and come with a serious kick. The décor is amazing, the bartenders friendly, and the food is solid. Everything you could want in a bar where the television plays old surf movies and thatch covers the bar.

Located underneath the Mob Museum in downtown, The Underground is a beautiful recreation of a mobster-era speakeasy. 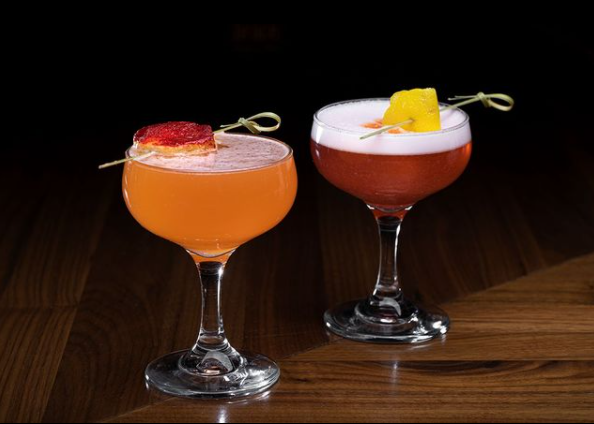 If you visit the museum, you can just take an elevator down. If you don’t want to buy a ticket, you can usually find the password on their Instagram page.

You’ll find Prohibition-era cocktails, including some made with the moonshine that they make in-house, along with a nice beer selection. But don’t drink beer here. Get yourself a clover club cocktail or something with moonshine and a cherry, and drink old school.

If you love old-school video games like I do, you’ll spend all night at Player 1. 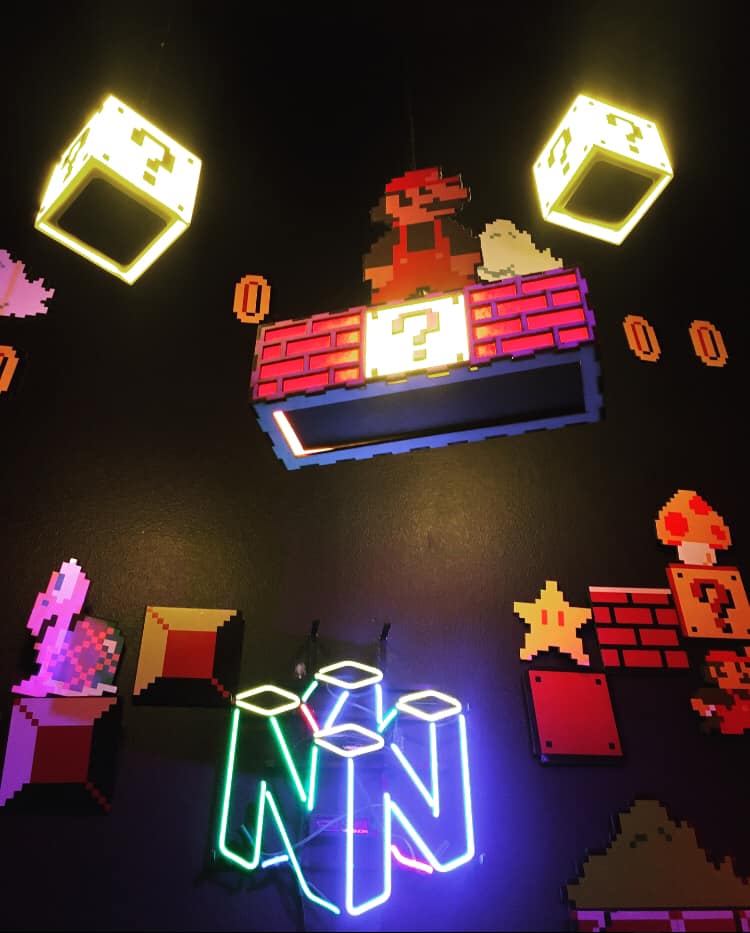 Every vintage console arcade game you can imagine lines the walls, and solid drinks and bar food will keep you happy between games. And the great part? Once you get in, which is either cheap or free, the games cost nothing. No pockets full of quarters or trying to get that $5 bill to go into the stupid change machine. Just play away and sip on a beer until you get hungry, and then grab a hot dog.

The latest PlayStation and Xbox games are available too, and you’ll find a horde of like-minded gamers ready to take a shot at you. They may even take a shot with you, if you’re buying.

And there you have it, the 10 coolest bars in Las Vegas. If you don’t see me at the tables, now you know where I’ll be.

*Character, like everything else, is in the eye of the beholder. These are the joints I love, but if you think there’s anything that I’ve left off this list, let me know in the comments.