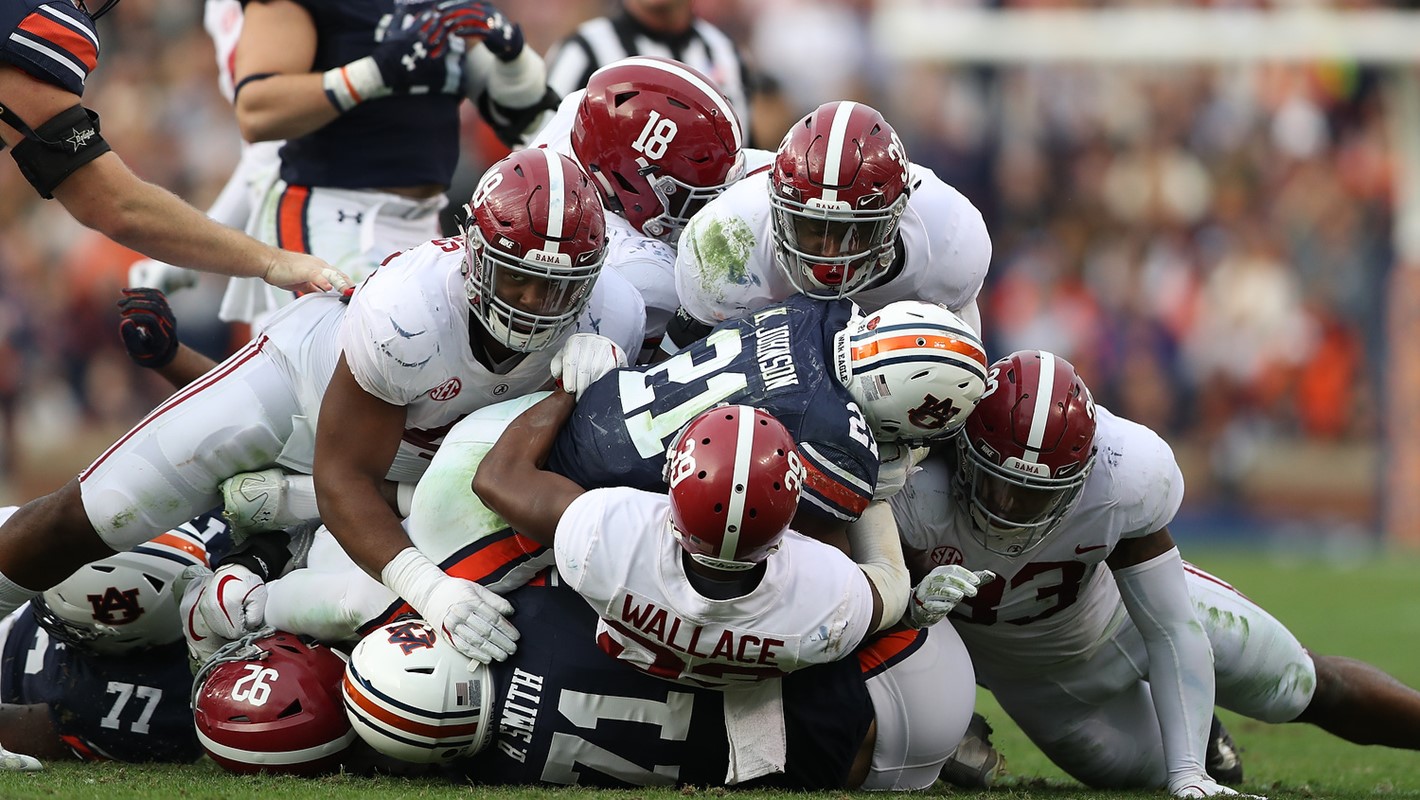 Rivals Alabama and Auburn both still hold some hope of earning one of four coveted spots in the 2018 College Football Playoff. (Image: rolltide.com)

Four playoff spots are up for grabs, and no team is considered a lock following a crazy Week 13 that saw Alabama and Miami fall from the unbeatens, leaving Wisconsin as the lone remaining undefeated squad in contention. Central Florida, a mid-major program, is 11-0 but won’t be considered for a playoff spot due to its cupcake schedule.

Alabama’s (11-1) loss to in-state rival Auburn wasn’t a major shocker considering the Tigers (10-2) are also in contention for the College Football Playoff. But few expected the Hurricanes (11-1) to lay an egg on the road against a mediocre-at-best Pittsburgh team that had nothing to play for other than harming Miami’s national title chances and pride.

“The U” will have an opportunity for redemption on Saturday in the ACC Championship Game against top-ranked Clemson (11-1). This game is likely one of a few “play-in games,” with the winner headed to the College Football Playoff, and the loser to a lesser bowl game.

Clemson, the defending national champions, also has a bad loss on its resume, dropping an early season contest to Syracuse, now just 4-8. Coach Dabo Swinney’s Tigers opened as a 7.5-point favorite, a spread that has since jumped to 9.5.

Clemson’s opponent in the 2017 national title game, Alabama, dropped its first contest of the season to bitter rival Auburn on Saturday. With the loss, the Crimson Tide failed to make the SEC Championship Game and now could be on the outside looking in at the College Football Playoff.

On Tuesday night, the playoff committee will release its updated rankings, and no one will be sweating it out more than Alabama and Ohio State fans.

If Alabama is slotted ahead of Ohio State, however, the Buckeyes will likely need a blowout victory over Wisconsin on Saturday in the Big Ten Championship to move back ahead of the Crimson Tide when next week’s final rankings are released.

If betting lines tell us anything, the top four spots will likely go to Clemson, Oklahoma, Wisconsin, and Auburn, with Ohio State, Georgia, Alabama, and Miami all holding reasonable possibilities of claiming a coveted spot in the 4-team playoff bracket.

Alabama fans should be rooting for Ohio State, who are 6-point favorites, to squeak out a close game. If Wisconsin wins, the unbeaten Badgers should be a lock for the College Football Playoffs, potentially taking a spot away from the Crimson Tide.

Alabama’s other potential path to the playoffs, however, is for TCU (10-2) to beat Oklahoma (11-1) in the Big 12 Championship Game, an upset that would likely end the Sooners’ national championship dreams in coach Lincoln Riley’s first season after replacing the legendary Bob Stoops who abruptly retired during the offseason. TCU is a 5.5-point underdog.

The SEC Championship Game is also almost certainly another play-in game, with Georgia, 2.5-point underdogs across Las Vegas sportsbooks as of Tuesday morning, trying to avenge a 40-17 road loss to Auburn earlier this month.

Buckle up, folks. Championship Saturday is going to be a bumpy ride. Grab some beers, grill up some steaks, invite your buddies over, and get ready to place your bets.