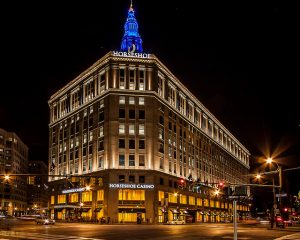 Cleveland poker dealer Robert D. Brown has been indicted on allegations that he cheated during a game. (Image: Cleveland.about.com)

A Cleveland poker dealer was indicted by a Cuyahoga County grand jury for allegedly cheating during a September night while working at the city’s popular Horseshoe Casino.

Robert D. Brown was accused of removing a card from the deck and hiding it up his sleeve intentionally. Brown denies the allegations, referring to the incident as a “fluke”.

On September 6, the Ohio Casino Control Commission was notified that a card was missing from a deck.

After searching around the table and inside the automatic shuffle, investigators discovered the card was up Brown’s sleeve.

Investigators then viewed the casino’s videotape, and allegedly noticed Brown place the card inside the sleeve of his shirt. If these claims are accurate, Brown’s argument that it was simply a “fluke” will be difficult to hold up in court.

Brown’s Side of the Story

He asserts that after the automatic shuffler indicated a card was missing from the deck he followed proper protocol.

Speaking to Cleveland’s Fox News 8 reporter Lorrie Taylor, Brown said he notified the floor manager of the missing card, and the area was then searched.

Brown adamantly denied intentionally hiding the card up his sleeve. He stated that he has no idea how he ended up with the card.

When charges were filed against Brown, he was stunned. The 57-year old poker dealer was immediately suspended by the Horseshoe Casino, pending the completion of the investigation.

It is uncertain which card was missing. No motive has been alleged and no other employees or poker players have been indicted or are under investigation at this time.

Brown will make his first court appearance November 13. It is unclear whether or not Brown has obtained legal counsel.

Bad for the Game

There is nothing more harmful to the game of poker than a cheating scandal.

This is true whether Brown is innocent or otherwise.

The poker world has been rocked by numerous costly scandals in recent years.

A poker player from North Carolina was convicted of using counterfeit chips in a tournament in Atlantic City, New Jersey in February.

43-year old Christian Lusardi’s irresponsible actions caused the Borgata to suspend play in a $2 million guaranteed tournament after discovering nearly $800,000 worth of counterfeit chips were in play. Lusardi has been sentenced to five years in prison.

Robert Brown isn’t the first person accused of cheating during a poker game, and he won’t be the last.

this makes no sense . the shuffler counts the cards, so a short deck will quickly be noticed , and never get dealt . who could benefit ? I suppose a player in the game could have duplicates (an ace or two ?) held out as well , and the two cohorts somehow got their signals crossed . this guy is either really dumb or really innocent !