As the 2017 World Series of Poker begins to start breaking down to its final few tables, the air inside the Rio gets colder (literally) and more serious. At the end of Day Six in the Main Event, just 27 players remain, and all are guaranteed at least a quarter million dollars. But the real prize, $8.15 million, is right around the corner, with cameras rolling no less. 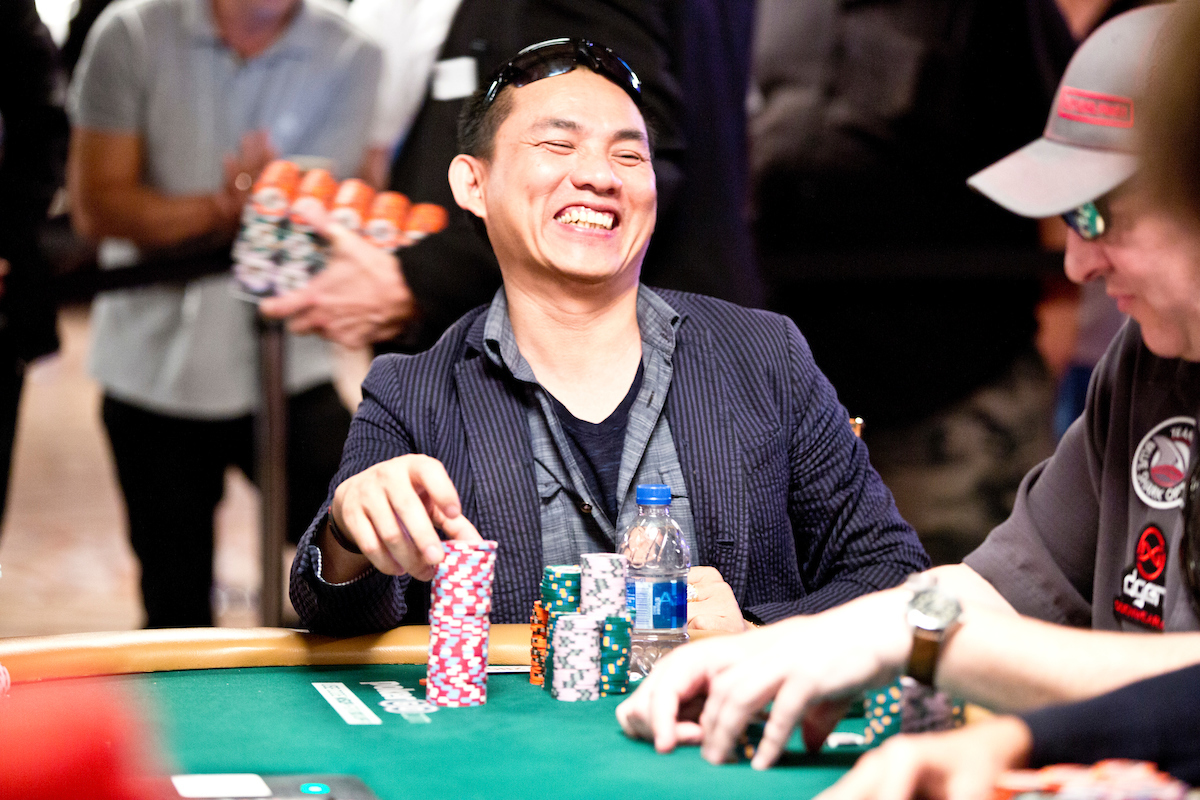 Christian Pham is all smiles after catching the right cards in the right places to surge into the Main Event lead with just three tables left to beat. (Image: Jamie Thomson / PokerPhotoArchive.com)

For the first time in his career, Pham has a chance to win a bracelet in an event he intended to enter. His first and only WSOP title came in a 2015 $1,500 No-Limit 2-7 Lowball Draw tournament. The victory paid him $81,314, but that wasn’t the main story.

Pham, a Vietnamese immigrant from St. Paul, Minnesota, told WSOP officials that he didn’t realize he had signed up for a 2-7 tournament until he got to the table. In fact, he wasn’t even sure he knew how to play the game. He had to Google the rules and quickly learn. It turned out to be the best mistake he’s ever made.

“I signed up for the wrong tournament,” Pham recalled in a WSOP interview. “I had never played the game before – not even one time. I learned from the other people at the table and tried really hard. Fifteen hundred dollars is a lot of money so I had to learn quick.”

Fast forward two years to Monday, and Pham finds himself deep in an even bigger tournament, this time not by accident. But, again, a little luck (okay, a lot of luck) went a long way. On Saturday, he got caught bluffing off all his chips and needed a six on the river to stay alive. The miracle card hit.

Thanks to that hand, and many others where the cards simply fell his way, the 2-7 lowball bracelet winner is the chip leader with 31,440,000 and just three more tables to beat.

Cards go in the air on Monday at noon PT, and the session won’t conclude until the final table of nine players has been reached.

Michael Ruane and Antoine Saout were in this position last year, a day away from potentially making the final table. These former November Niners will both return to action on Day Seven on Monday.

Should Ruane spin up his stack and make the final table in consecutive years, he’ll become just the third player since 2003, along with Dan Harrington and Marc Newhouse, to pull off such a feat.

Ben Lamb is also seeking his second Main Event final table appearance. His current deep run is his first WSOP cash since 2011, the year he finished 3rd in the Main Event and also won WSOP Player of the Year.

Lamb spent much of Sunday in the chip lead and consistently used his big stack to push around his opponents. He finished the day with 25,685,000, good for 4th in chips. He’ll have the chip leader, Pham, on his left when Day Seven begins, so he may not have as many opportunities to push the table around like he did on Day Six.

Marcel Luske is another player that has been in this position before. Twice, actually. In 2003, he was eliminated in 14th place. The following year, “The Flying Dutchman” bubbled the final table. He’s going to need some special rungood on Monday to continue. His 2,990,000-chip stack puts him at 26th out of 27, and leaves him just 12 big blinds to work with.

Richard Gryko (2015) and Bryan Piccioli (2013) are the only other remaining bracelet winners in the field. No player left has won more than one.

It’s not uncommon for a player to question certain decisions after busting out of a tournament. Even Superman makes mistakes.

Jonathan Dwek, decked out in a Superman costume, may have second thoughts about his play in his final hand on Sunday.

Pham opened for 425,000 with A♦3♦ and Dwek three-bet from the small blind with A♠8♣ to 690,000. It’s unclear if he meant to just call the initial raise or purposely min-raised. He initially didn’t put enough chips in the pot for a full raise, but had enough out there for the dealer to force him to raise the minimum.

The flop came K♥5♦3♠, giving Pham a gutshot straight draw and backdoor flush draw, and complete air for Dwek. Superman feared not the mediocre flop, and fired out a continuation bet of 800,000 and got a call.

The 2♦ on the turn wasn’t much help for Dwek, although it did give him the low-end gutshot straight draw. He refused to give up on the pot and bet again, this time 1.4 million. His opponent wasn’t going away with a straight and flush draw.

The 4♦ on the river completed the straight flush for the end-of-day chip leader. Dwek continued his aggression, betting out 2 million. Pham quickly moved all-in and got called. Superman was finally defeated in 38th place ($176,399).

Like it or not, Chris Ferguson will stand atop the Player of the Year standings when the summer Series officially concludes on Saturday.

The man often referred to as “Jesus” picked up one final small cash in the Little One Drop charity event. That brought him to 898.46 points, barely ahead of Ryan Hughes (876.35) for the lead.

Kenny Hallaert and Dario Sammartino were still mathematically in contention to take the lead, but both would’ve needed a top three finish in the Main Event. Both players busted on Sunday.

The race isn’t over, however. Starting on October 19, WSOP Europe kicks off at King’s Casino in the Czech Republic with 11 more bracelet events that all count towards Player of the Year.

What WSOP is All About

Some players appreciate winning a WSOP bracelet more than others. Adrian Moreno couldn’t have been more ecstatic to take down Event #74, $1,111 Little One for One Drop.

The first-time bracelet winner scored $528,316, far and away the biggest victory in his career. Prior to cashing in three WSOP events this summer, he had approximately $60,000 in live tournament winnings since his first recorded cash in 2009.

On the final hand, he stuck his money in with a flush draw against Martin Lesjoe’s top pair. He made his flush on the turn and then proceeded to dance and celebrate with his friends. Soon after, he sat alone in a chair and cried tears of joy as he remembered a dear friend.

Prior to the tournament, he left town to attend the funeral of one of his best friends. He flew back for this event. What a bittersweet way to honor his late friend.

Fair play to Jesus, I know he was involved in all that FTP stuff, and I hope he is sorry about that. I like to think, that the man who went from $0 – $10000 understands what he was involved in and will try to make amends. He is no doubt a good player, and it shows that the good players can come through even in the face of adversity.