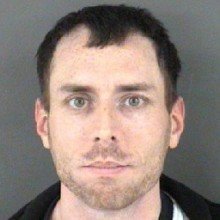 Christian Lusardi, the Borgata chip scammer faces five years in prison and will have to pay almost half a million to Borgata as part of his plea deal. (Image: bluff.com)

Christian Lusardi, the North Carolina man who stands accused of defrauding poker players and the Borgata by introducing bogus chips into the mix at the Borgata Winter Tournament in 2014, pled guilty to trademark counterfeiting and criminal mischief this week in an Atlantic City courtroom.

If convicted, Lusardi, who is already serving a five-year sentence for his role in a $1 million DVD bootlegging operation, could receive another five years on top.

Prosecutors are recommending a sentence of five years in prison on the trademark counterfeiting charge and three years on the criminal mischief charge, to run concurrently.

The Borgata Winter Open Big Stack NLH event was suspended in January 2014, and later cancelled, after the suspected rogue chips were discovered by players and staff.

The heat got too much for Lusardi, a former chip-leader in the tournament, who ultimately min-cashed for $6,814 before the chips were discovered; he was caught attempting to flush $2.7 million in fake Borgata chips down the toilet of his room at the nearby Harrahs Resort.

Coincidence? Well, that’s for the courts to decide.

What is for sure is that law enforcement cannot resist a good poker pun: “When you gamble on a flush in high-stakes poker, you either win big or lose big,” Rick Fuentes, superintendent of the New Jersey State Police, said. “Lusardi lost big.”

Superintendent Fuentes could have also have taken the “don’t splash the plot” line, but, perhaps wisely, chose to quit while he was ahead.

Cheating is no laughing matter, though. Lusardi managed to completely ruin a high profile tournament and waste three days of many poker players lives.

Following a ruling by the New Jersey regulator (DGE), the Borgata settled with players using the following formula. The DGE decided that 2143 entrants who did not cash were entitled to their money back (buy-in plus reg fee).

These included players from Day 1a who may have come in contact with Lusardi, because they were playing in the same room, and (since this was a reentry tournament) players on Day 1b who may have done so as well.

Meanwhile, the $50,893 in prizes owed to players who busted in the money were paid as scheduled, while the remaining 27 players who were still “in” at the time of cancellation chopped the rest for $19,323 each.

“Counterfeiting is a serious crime that carries stiff penalties, as this case demonstrates.

“Lusardi clearly feared that his scheme would be exposed, or he wouldn’t have resorted to such a desperate measure to dispose of his phony chips.” added Elie Honig, director of the Division of Criminal Justice,

As part of Lusardi’s plea bargain, he must pay Borgata $463,540 for lost tournament revenue, and $9,455 to Harrah’s for plumbing damage.

He will be sentenced on October 22.

Wow, the “splashing the pot” line in this article is the funniest thing I’ve seen on this forum. You win CardsChat forever Phillip Conneller.

Because he’s a SHIT BAG! What kind of presents do I want to leave in his change bowl???? The kind that says, “Among everything else poker needs to fight for right now the reputation from a selfish cheat who will never gain the inner ring of trust among us isn’t making the list. Thanks for giving some high on the mountain finger pointer ammunition against us poker players as a group that YOU will never belong to. I hope they are a miserable five years. I hope your butt hurts most nights. I hope you feel the kind of theft that YOU put into others who were within the confines of the rules. Your choices are so selfish and disrespectful that there is NO reason to EVER excuse you for what you did. You do not have a problem or mental disability in making correct decisions. Yours was pre-meditated by fault of moral character and greed. Walk away from the game or expect players like myself to push you from it”.