Poker and Chess Stars Test Their Skills in ‘Choker’ Tournament

Chess players Eric Rosen and Alexandra Botez will compete in the final of the Challengers Choker Cup on Thursday, a competition that combines chess and poker skills in one unique game. 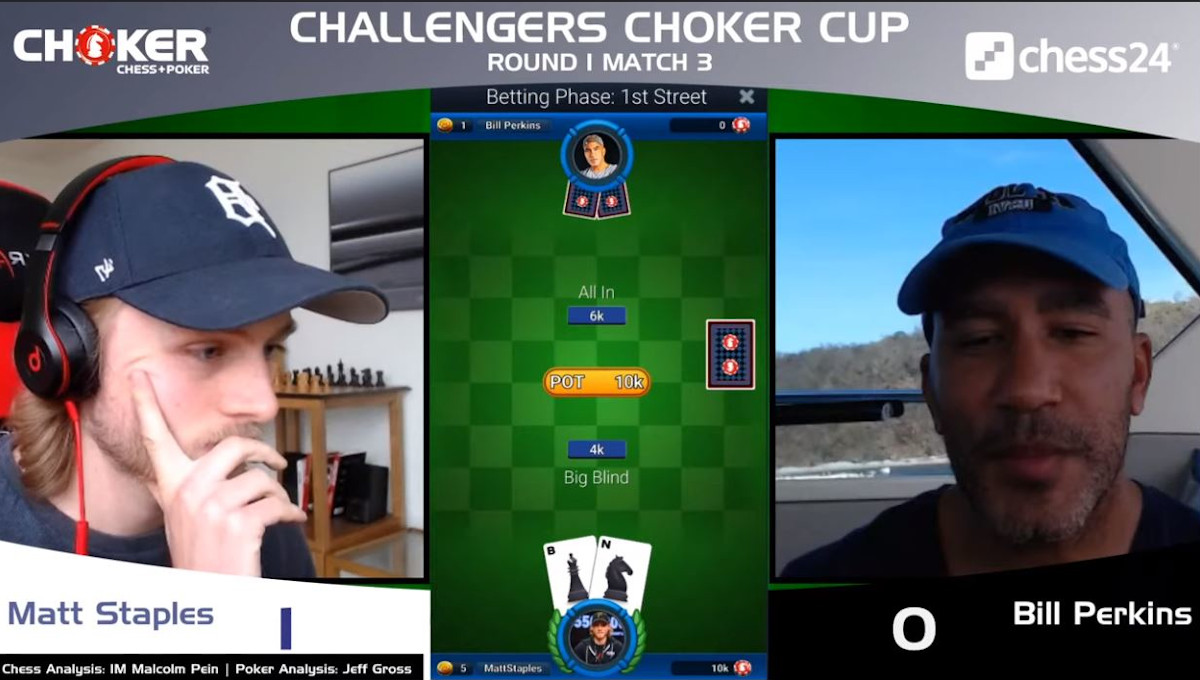 Bill Perkins and Matt Staples took part in a tournament for Choker, a game that combines elements of chess and poker. (Image: chess24/YouTube)

Choker – a game played on a mobile app that launched late last year – features the betting action of poker, but requires chess skills to win at showdown.

Poker Played with a Deck of Chess Pieces

In Choker, players begin each hand with two cards drawn from a deck of 44. That deck includes four queens, eight rooks, eight bishops, eight knights, and 16 pawns. After a round of standard heads-up poker betting, players receive two more cards. If neither player folds, each receives a fifth card, followed by a final round of betting. All cards remain face down throughout the hand.

If the hand goes to showdown, the players take to the chessboard, where each starts with a king and a lone pawn. From there, the two sides alternate placing the rest of their pieces. Then, they compete in a game of blitz chess, with the winner picking up the pot. Just as in a heads-up tournament, a player wins a Choker match by taking all of their opponent’s chips.

According to chess Grandmaster and Choker ambassador Hikaru Nakamura, the combination of the two disciplines makes the game challenging for both poker and chess players.

I think the thing that for me is very interesting is the fact that it’s not clear-cut what are good starting hands,” Nakamura told chess24.com’s Jan Gustafsson. “I think it will be interesting to see how it develops from the standpoint of strategies, like the betting, understanding what starting hands are good, what ranges are good, and then also just pure chess ability as well.”

That brings us to the Challengers Choker Cup. Organizers invited eight players to participate, with the winner taking on Nakamura himself in a grand final. While five of the players possess chess backgrounds, and one spot was reserved for a wild-card entry, the field also included two well-known poker players in Bill Perkins and Matt Staples.

The poker duo were denied the chance to take on other opponents first, as Perkins and Staples were paired against each other in the quarterfinals. Staples jumped out to a 2-0 lead in the best-of-five series, but Perkins roared back, winning three straight matches to advance.

Perkins then took on FIDE Women’s Master Alexandra Botez in the semifinal. This time, Perkins’ poker abilities were no match for Botez’s strong chess skills, as Botez won via a 3-0 sweep. Botez will now take on International Master Eric Rosen in Thursday’s final.

The results make sense given the format of the matches. Choker matches use a starting stack of just 10 big blinds, and the blinds increase after every hand. That heavily weights the results toward chess skills, at least for the moment.

That said, Nakamura points out that even the best chess players need to have some skills in the poker portion of the game to come out on top.

“Obviously, if you’re really good at chess, but you’re not good at understanding betting and you just assume, ‘Hey, I’m Hikaru Nakamura, I’ve got a queen and then I get four pawns, and I can just beat anybody,’ it’s probably not going to work out very well,” Nakamura said.

I thought this initiative to create a game like this interacting Poker with Chess was very spectacular.
I always practice both sports but I always felt the need to have a challenge like that.