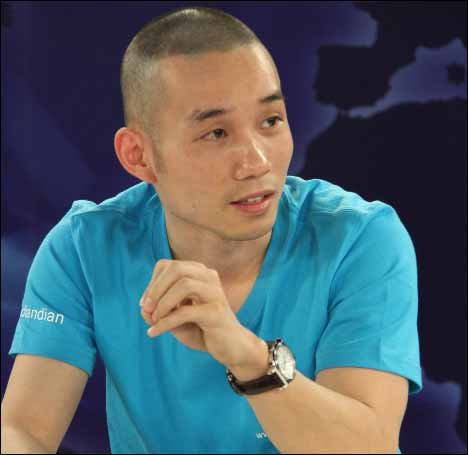 Tech expert and poker fan Xu Chaojun has appeared on Chinese TV to defend himself against allegations that he participated in an illegal poker ring. (Image: ceokungfu.com)

One of China’s leading internet tycoons has allegedly been caught up in an illegal poker ring where the stakes involved topped $440,000.

Chaojun is now facing up to three years in prison, because he took a rake from the game.

Under Chinese law, gambling is legal but only if it doesn’t involve money. If Chaojun had simply hosted the game and not had a hand in the financial side of the action, he would have been facing a lesser charge.

However, by taking five percent from each session (which means he may have pocketed around $22,000 from the $440,000 wagered), Chaojun could be found guilty of running a casino.

The Chinese government hasn’t been shy about taking down unauthorized poker operators.

In April 2015, the Chinese National Police force raided a PokerStars-sponsored tournament over allegations that it was running an illegal tournament. Despite being given the green light by local authorities, the APPT Nanjing Millions was halted on Day 3 after officers stormed the Jiangsu Wutaishan Sports Center, where it was being held.

“Due to the APPT Nanjing Millions tournament being suspected of illegal gambling, the police are now investigating and the event is being ceased,” read an announcement to players and staff at the time of the shutdown. “All related staff should go and register at the designated location and cooperate with the police for the investigation.”

Although no one was charged on that occasion, the incident highlighted the uncertain nature of China’s gambling industry outside of Macau, and showed a general fickleness in its attitude about gambling.

Who is Xu Chaojun?

The story of Xu Chaojun and his illegal poker ring has caught the attention of mainstream media outlets in China because of his status as an internet tycoon. A former executive at Renren, a social media platform with 240 million users, Chaojun has been a figure on the tech scene since graduating from the prestigious Tsinghua University.

In addition to serving as vice president of Renren, Chaojun has been influential at companies such as search engine Sogou and games developer Shanda. He also was the CEO of Diandian, a Chinese version of Tumblr.

As part of these companies, he’s not only become a well-known figure to the Chinese public, but among the country’s richest business leaders.

Chaojun also was one of six Chinese poker players who in April lost to Lengpudashi, or “Cold Poker Master,” a poker bot created by artificial intelligence researchers at Carnegie Mellon University that outplayed the humans in a five-day, 36,000-hand experiment arranged by an executive from Google and Yue “Alan” Du, who in 2016 became the first Chinese national to win a WSOP bracelet.