Chinese poker dealing robots might sound like something out of a science fiction movie, but they’re a real thing and could some day be coming to a casino near you. 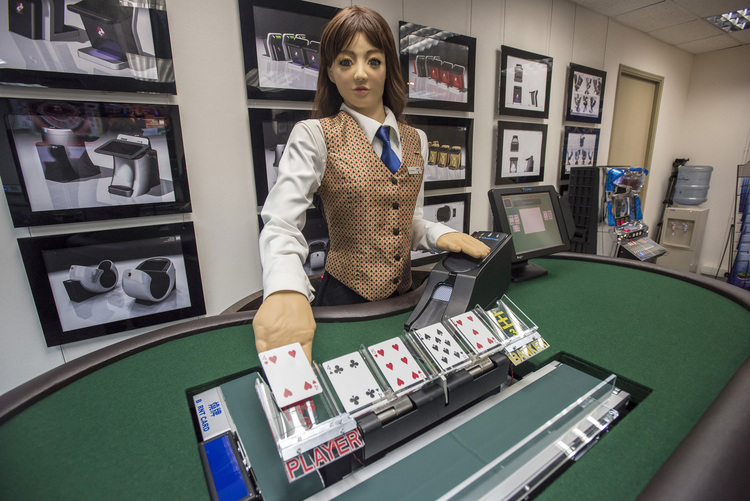 Recently exhibited at a gaming show in Macau, the first incarnation of Min the poker dealing robot has captured the imagination of casino bosses in China and the mechanical dealers could soon be making their way to the US.

Designed and manufactured by Paradise Entertainment Ltd., a Hong Kong-based company, the humanoid robots are currently capable of dealing cards into pre-fab slots mimicking the flop, turn, and river.

The main reason for the production of the robotic dealers, other than a general move towards this type of technology in the world at large, is to help cut costs.

In comparison to Asia, American casino labor costs are high, and with the market currently finding ways to reduce costs and improve profit margins, robotic dealers are likely to sound appealing to major operators.

Following on the trend of electronic poker tables, which were not the huge hit that some casinos had hoped, operators can at least hope the robots will be enough of a novelty lure players in to take a gamble on this new technology.

Not Quite Ready for Market

Although the Chairman of Paradise Entertainment Ltd. Jay Chun has said that he’s currently in talks with overseas buyers, it’s unlikely we’ll see the like of Min dealing to players at the WSOP in the near future.

Min is currently a prototype and, while she’s able to deal cards in a certain way, that’s about the extent of her skills at the moment.

However, Chun believes this is just the start of a robot revolution and that his creation will become much more advanced in the coming months. In fact, already on his list of upgrades is facial recognition technology as well as a language chip that would allow Min to communicate with customers in various languages.

However, dealing with split pots, irate players, and anything else the poker world has to throw at hapless dealers doesn’t appear to be on Chun’s list of proposed upgrades just yet. We’re just hoping she is more knowledgeable than Siri, who has yet to find us anything, anything at all, on the Las Vegas Strip.

I do’nt think its a good idea. We already short jobs and casinos are doing just fiNe. You need this some kinda luck bet to seewho gets the job. In God we trust. I guess if casinos just give it out in freerolls people would prolly have that. I see.

this is absolutely disgusting. i would rather play a game of dice in a alley than to play with a robot. i first noticed this trend at a calrs jr., after walking in and noticing the kiosk i almost fainted. i refused to use the kiosk and told the manager that i would no longer be coming inside the store to eat, you still had humans at the drive through. after a few days of a lot of the customers complaining they added a human to the front line, and a few weeks after that the kiosk was gone completely. it is a sad day when people go out of their way to replace people in the most mundane and safe jobs. where are the underwater welding robots? one of the most dangerous jobs out there, or the hazardous waste removal robots, or the robots that can run the government instead of just giving away our birth rights they (robots) should not be Holden to special interest and they have no family to be used as leverage. and just by chance you might check out the “georgia guide stones” just for a little perspective on the robot revolution.