Letting the chips fall where they may has likely taken on a brand new, horrifying meaning for a Chinese man who racked up over $9,000 in debt.

35-year-old Guo Xu was on a trip with his family in Zhengzhou, the capital city of the Henan province, when he decided to kill some time at the card room inside the hotel he and his family were staying at. Though Xu went to the card room with the intent of playing some games and even a game of chess or two, he was convinced to join in on a game of mahjong. It seems the move to the popular tile game was not a wise one because events took a drastic turn for the worst.

As the night went on, mahjong proved not to be Guo Xu’s game and his gambling caused him to 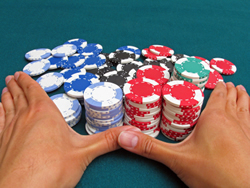 A Chinese gambler lived after being tossed from an 11th floor window!

quickly rack up a debt of $9,600 (£6,000). The irony here is that Xu was seen as quite a good player in his home town, a small village in the central Henan province. But just because you are a big fish in a small pond doesn’t mean you can take on sharks. No doubt Xu thought his skills alone would be enough to strike it rich in a high-stakes situation.

Those pipe dreams were soon dashed as Xu severely underestimated how good the experienced city players actually were. As expected, Xu was unable to pay back the $9,000 and the opposing gamblers were more than displeased. In response, the gamblers grabbed Xu and tossed the hapless man from an eleventh story window at the hotel. Xu’s plummet lasted a total of eight floors until he finally landed on an air vent and chimney system on the third floor. To make matters worse, there were no awnings or additional obstacles in the way to break his dizzying fall – Xu crashed with full force.

A Small Stroke of Luck

What can only be considered a miracle or, at least, the only lucky streak Guo Xu had that night, he survived the terrifying fall. Because of the sheer force, Xu became wedged in the small confines of the chimney area where he could only be released after a team of emergency service workers cut him free.

After being extracted from his precarious situation, Xu had to be lowered from the chimney to ground level in a stretcher. Due to the severe and delicate nature of Xu’s injuries, emergency services had to be as careful as possible to avoid causing any further harm. The entire rescue lasted over the course of several hours and who knows what was going through Xu’s head during the process.

Santa He Was Not

Even if you survive, no one falls from such a great height with only a few scratches. Paramedics at the scene claimed that Guo Xu appeared paralyzed from the waist down. Doctors, however, say that because Xu lost such a large amount of blood while stuck in the chimney, there is a chance that both of his legs will have to be amputated as a result.

But Was it Worth it?

While it might have been a pretty horrific event for Guo Xu, some might agree that his wife and five-year-old son are getting the worst of Xu’s debt. Both wife and child were spending time at the local zoo as Xu was racking up his sizeable debt. “Our lives have been ruined by this,” said Xu’s wife to reporters. Xu was the one who earned money for his family and now they face not being able to pay medical bills, let alone any other bills.

Being dropped from an eleventh story window is certainly one of the more brutal ways that gamblers who have racked up a debt they can’t pay have been punished. Obviously these Chinese gamblers weren’t content with a simple “I.O.U.” and resorted to some old-school methods. Had this taken place in Vegas, Xu might have suffered some broken knee caps or even sported his own pair of cement shoes on the long drop.