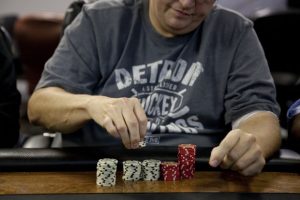 Charity poker games have come under fire from state legislators in Michigan, but charities, suppliers and venues feel the law is unfair. (Image: mlive.com)

The Michigan Gaming Control Board has been sniffing out fishy phenomena in the nefarious, twilight world of charity poker tournaments recently. For those of you who believe that such events do good things for good causes while promoting fun and sociable poker in a positive way, prepare to be shocked.

Actually, we’re kidding: the vast majority of charity poker tournaments are completely above-board and legit; however, the Control Board said it has, over the last couple of years, suspended games at 23 venues which they ruled contravened the Bingo Act. That may be down to the fact that they were playing poker and not bingo. Did anyone else spot that?

The major point of concern for the Control Board at the moment is the extent to which commercial gaming suppliers can profit from charity tournaments, and the nature of their relationships with venues.

Under the Bingo Act, charities may rent a venue and hire a supplier to help them run the games, but actual agreements between venue and supplier are prohibited because, according to Rick Kalm, executive director of the Gaming Control Board, they can result in “the illegal diversion of funds, fraud, falsifying state records and other criminal acts.”

It was under this stipulation that Michigan’s largest charity poker supplier, Lansing-based Aces Gaming, had its license suspended this week. The company is accused of diverting $1.6 million in profits back to two venues that hosted charity games between 2008 and 2012, Northville Downs race track and Trippers Bar in Lansing, and also to Douglas Management and Investment, a consulting company run by former State Senator Doug Cruce, who also happens to be the founder of the Michigan Charitable Gaming Association (MCGA). MCGA represents charities, gaming suppliers and land-based poker room owners.

So far, so fishy, but Aces co-owner Heather Schuchaskie says that her company has been unfairly treated. She claims that agreements with the venues were laid out beforehand about what each party would provide in terms of equipment, and the profits would be split down the middle, which never exceeded the 50 percent permitted by state law. The funds paid to Doug Cruce, she said, were because he was contracted as an operations manager by Aces and was paid for his services.

But it turns out that Cruce was paid $516,000 for his services. Where do we apply for that job?

“If there was something wrong with these agreements, that could have been and should have been addressed long ago,” Schuchaskie said, “since they’ve been on file with the state from the very beginning. [They are] making it sound like we defrauded charities, and we didn’t. I can accept their decision that we were in violation of the Bingo Act, but I looked for feedback on this long ago, and had no reason to believe we were doing anything wrong. All of this was on file [with the state], it wasn’t a hidden thing.”

Whether there are shady goings-on in the twilight world of Michigan’s charity poker tournaments or not, Aces Gaming is not the first company to fall foul of the dreaded Bingo Act, and suppliers, venues and charities feel that the current law is bad for everyone involved. In May, a collation comprised of all three groups filed a motion opposing the current law, asserting that it “severally restrict(s) and essentially eviscerate(s) the statutorily authorized fundraising activities” of charities and destroys small businesses attempting to supply or provide a venue for charitable poker games.

Seeimg how i am from MI. My money is bribery, or lobbying whatever you wanna call it. No hires someone here as an operation manager at 516K. Just doesnt happen. Unless you happen to be a state senator that basically has a huge swing with the laws and decision making for charity poker rooms.