Chance Kornuth Beginning to Run Away with Galfond Challenge

Chance Kornuth entered the Galfond Challenge as a massive underdog. One-third of the way through the contest and he’s now the heavy favorite. 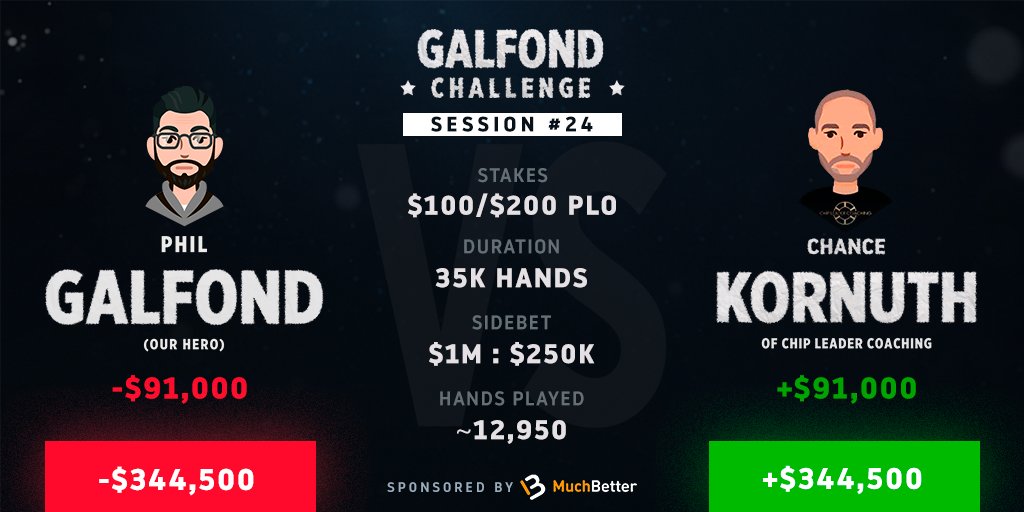 The third Galfond Challenge isn’t receiving the attention from the poker community as the Polk-Negreanu match. Part of that is likely due to the competitors not being drama queens like Daniel Negreanu and Doug Polk. But this high-stakes pot-limit Omaha competition features two exciting and talented pros.

Phil Galfond won his first two heads-up challenges against online pros “VeniVidi1993” and “ActionFreak.” He then took on Chance Kornuth in his third match and entered as a 4-1 favorite. As such, he gave away 4-1 odds to Kornuth ($1 million to $250,000) on a side bet.

The Run it Once poker site founder showed early on in Galfond Challenge III why he was so heavily favored. He busted out to a lead exceeding $280,000 through the first nine sessions. Some poker players on social media at that point even wondered if Kornuth would be better off just throwing in the towel and paying off the side bet. It appears those who suggested he do that were way off base.

Chance Kornuth is Now the Favorite

What a difference a few weeks can make in a high-stakes PLO battle. After Kornuth overtook the lead a few weeks ago, Galfond recently began chipping away at his lead. He had the deficit down from $300,000 to $253,000 heading into Friday’s session. And then it all went into reverse for the former Full Tilt Poker crusher.

The good news for Galfond is the deficit, albeit large, certainly isn’t insurmountable. They’ve “only” played 12,950 hands, which is just a shade over one-third of the agreed upon amount (35,000 hands). So, there’s still plenty of time for the Run it Once founder to get back in and win the match.

If you’re Kornuth, you can’t let your foot off the gas or get too complacent and cocky. Galfond’s not only been in this position before. He was in an even worse spot earlier this year against “VeniVidi1993,” when he trailed by over $900,000. Long story short, he won that match in the end and had fewer hands to rally from than he has left in the current Galfond Challenge.