A $2 million guaranteed poker tournament planned for the new Champions Club poker room in Dallas has been taken off the board after the club’s owners encountered unplanned difficulties in launching their new facility. The event, originally scheduled for September, would have been one of the largest poker events in Texas poker history. 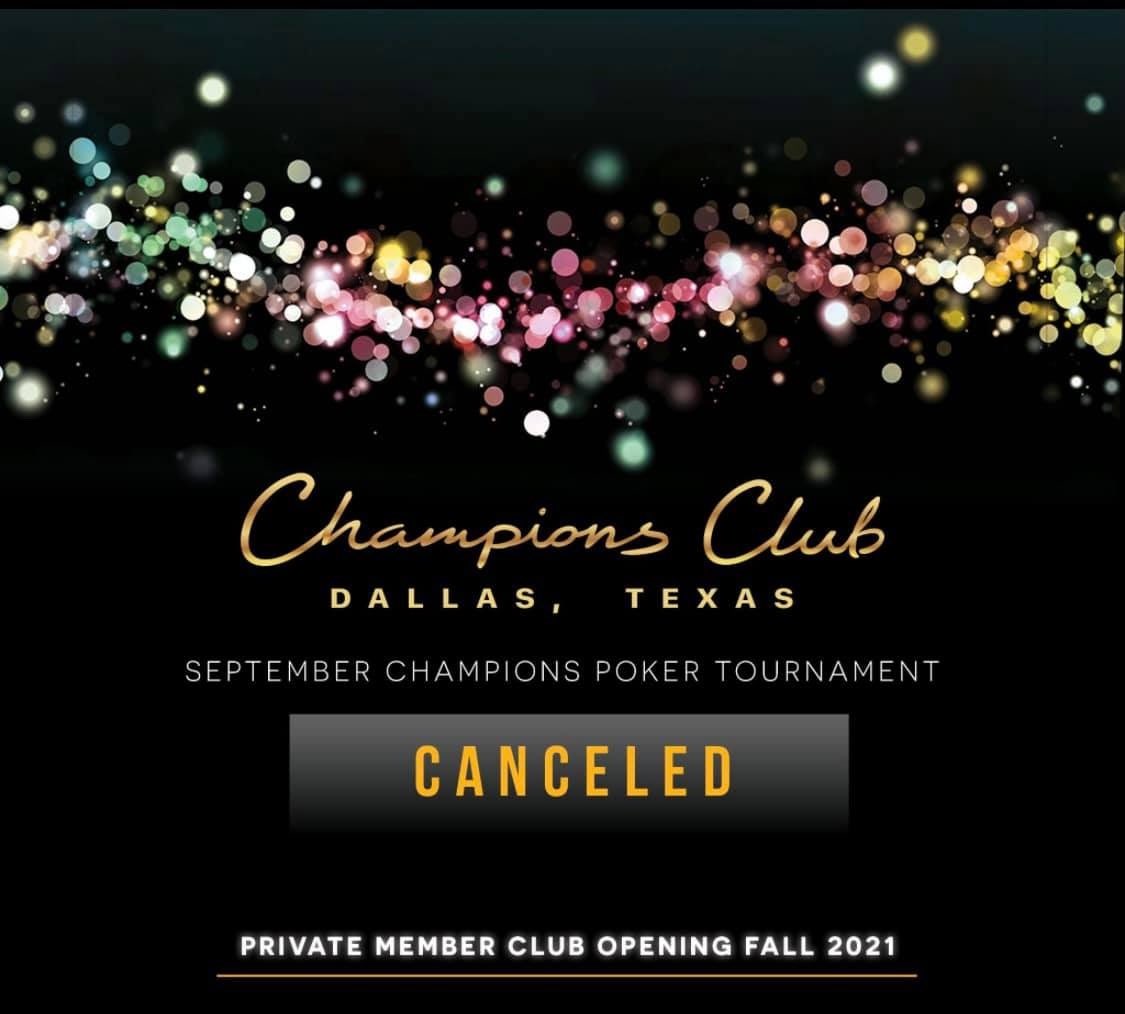 The Champions Club poker room in Dallas is still planning to open this fall, but will not be doing so with a tournament that promised to be the biggest in Texas history. (Image: Facebook/ChampionsClubDallas)

Champions Club announced the cancellation in a brief Facebook post last week. The $1,700 event offering multiple flights over several starting days would have begun on Tuesday, Sept. 14. The event was supposed to run for eight consecutive days, ending on the following Tuesday, Sept. 21.

“We regret to inform you that our September poker tournament in Dallas has been canceled,” Champions Club Dallas offered in its post. “Champions Club, Dallas will be opening this fall, offering a full complement of entertainment options.”

The Champions Club Dallas facility is associated with the same group currently reforming its operations in Houston. The Houston club ran what was depicted as a wildly successful $1 million event as part of its inaugural Lone Star Poker Series in April and May. The main event crushed its announced guarantee, building a $2,090,700 prize pool. That main event reached those lofty numbers, in part, by awarding about 150 seats through various promotions and giveaways.

The club also contracted with poker talent and marketing agency Above the Felt, which gave the Lone Star Poker Series a needed boost by bringing Matt Berkey, Darren Elias, and Chris Moneymaker to the main event. Despite the success of the main event itself, which was won by Joon Park, possible financial difficulties at the Houston club (the Champions group’s first location) may have factored into its closure just a few weeks later.

That club’s last sit-n-go took place on May 27. Champions also confirmed in a separate post that it’s looking for a new location in Houston, and its exact ownership situation remains unclear. Above the Felt issued the only broad press release in the wake of the Houston event, and an online page dedicated to the Houston facility remains on lockdown.

Possible financial difficulties connected to the Lone Star Main Event aren’t the only obstacle Champions’ owners face. The planned club in Dallas has run into strong headwinds in the form of neighborhood complaints. According to a report from Dallas NBC affiliate Channel 5, neighbors aren’t welcoming the club that plans to offer poker 24 hours a day.

The room, which has yet to open, is planned for a former restaurant near the North Dallas Parkway in a mixed-development zone adjacent to single-family housing. A dozen or so protestors turned out for a recent demonstration against the club, and a petition against the club by an area homeowner’s association has reportedly drawn about a thousand signatures.

“It’s going to be a 24-hour poker room and we just feel very strongly it doesn’t belong in the neighborhood,” resident Kimberly Shults told the Dallas news outlet.

The Bent Tree North Homeowners Association, which organized the anti-Champions Club petition drive, specifically cited the planned — and now-canceled — $2 million event in September as one of their major concerns.