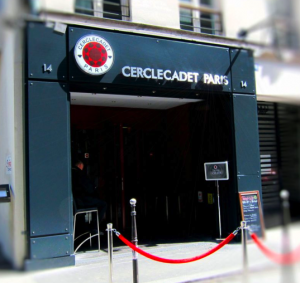 Cercle Cadet in Paris had apparently cleaned up its act after its previous incarnation, the Concorde Club, was shut down for alleged mob ties in 2007, but it was raided by police this week nonetheless. (Image: readingpokertells.com)

The Cercle Cadet poker club in Paris, formerly the Concorde Club, was raided by the French National Judicial Police this week. Fourteen people were taken into custody in the wee hours of Tuesday, including Cercle Cadet’s president, Serge Kasparian, and other members of the club’s management.

In seems that while France’s online poker market spirals helplessly, the live poker scene, too, is in a state of chaos. Just one month ago, Paris’ famous Aviation Club de France (ACF), supposedly the spiritual home of French poker and the traditional host of the WPT in France, was also the subject of a raid by police.

Eleven people were arrested during that dawn raid on the ACF, including owner Marcel Francisci, and the club was slapped with charges ranging from facilitating black market employment to money laundering.

The charges against the Cercle Cadet appear even more serious, however. According to French media, they include extortion by organized criminals, embezzlement, money-laundering and criminal conspiracy.

Coordinated raids by police on Parisian gambling clubs, known as cercles des jeux (game circles), are not without precedent, as the clubs have historically held links with the Corsican Mafia. Cercle Cadet’s predecessor was the Concorde Club, which was closed down in 2007 when it was exposed as a money-laundering outfit for a Corsican mobster based in Marseilles.

In 2009, Cercle Cadet received permission to open on the same premises after being greenlighted for a license by the Gaming Commission, the Judicial Police, and the Ministry of the Interior. The new licensee, Serge Kasparian, a restaurateur, was vetted strictly by the authorities prior to receiving the license, but now appears to be at the center of the new investigation.

The investigation has been ongoing for over a year, according to French newspaper La Monde, and is being led by Judges Herve Robert and Serge Tournaire. The latter is a specialist in prosecuting organized crime, as well as an expert in gambling law, and has been instrumental in the closure of other cercles. In 2011, three gambling clubs were closed in Paris due to fraudulent activity: Le Cercle Wagram, Le Cercle Haussman and L’Eldo in the city’s 17th, 2nd and 3rd arrondissements, respectively.

Meanwhile, a month after the raids on the ACF, the famous old club in the Champs Elysee remains closed; however, this week some of the club’s employees and customers began a social media campaign, #bringbackacf, to demand the reopening of the club until the accusations against it are proven.

The first cercles were established in Paris in 1907, when casinos were banned from operating within 62 miles of the French capital.

Following WWII, the government let groups of Corsicans run the cercles in return for their services to the French Resistance, and curiously, the clubs still operate under an old-fashioned law that deems them “non-profit organizations” devoted to “social, artistic literary and sporting activities.”

With the recent spate of forced closures, however, very few are currently in operation.