Boston Celtics legend Paul Pierce is used to hearing a ton of trash talk on the basketball court, but he got an unexpected earful from a well-known poker pro while competing in the PokerStars Players Championship (PSPC) in the Bahamas this week. 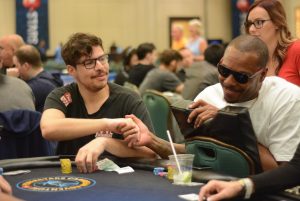 The trash talk between Paul Pierce and Mustafa Kanit is all in good fun. (Image: Winimax)

The 2008 NBA champion hung up his sneakers in 2017, and playing poker is apparently part of his retirement plans. Pierce was one of 1,039 to take part in the $25,000 buy-in event which moved into the final table phase on Thursday.

Pierce is no longer in the running, and before getting bounced from the event, he had to hear it from Mustafa Kanit, the Italian high-stakes pro who’s not usually known for his flamboyant table talk.

Before we show you the clip, a bit of context — ahead of the hand going down, Pierce was having a little fun with Kanit. The man known as “The Truth” during his playing days was literally dancing around the table after getting his pocket queens all in against Kanit’s pocket kings and spiking a queen.

However, Kanit would have the last laugh, bouncing Pierce form the event on this hand a short time later.

“Who’s the truth now?” the Italian asks with a friendly laugh after his getting his pocket jacks all in against Pierce’s ace-queen and hitting a jack on the flop.

“This is my game,” continues Kanit with a huge smile. “Welcome to my court! Bam!”

It was all in fun, though, as Pierce had a good laugh at Kanit’s trash talk and gave him a high five before exiting the stage.

“I ain’t heartbroken,” Pierce said to Pokerstars.com. “I had fun.”

Pierce was one of many athletes and celebrities to take part in the tournament, including golfer Sergio Garcia, skateboarder Tony Hawk, and former Super Bowl champion Richard Seymour.

The former Celtic is not new to poker, although he has yet to make his mark on the game. Pierce took part in the 2014 World Series of Poker (WSOP), but he didn’t cash, and he has no Hendon Mob results to his name.

Loved how friendly they were and how much fun they had , most people forget to have fun while playing , you can focus on your game and have fun at the same time thats what khanit prooved , hope to see more smiles and happy faces on the tables )