Cate Hall, Mike Dentale Get Ready to Battle It Out Sunday on Poker Night in America

Cate Hall and Mike Dentale are about as cordial as Hillary Clinton and Donald Trump were on the campaign trail. On Sunday, the poker players will have their own decision day, and both are hoping it doesn’t turn out the same as Election Day did for the former First Lady. 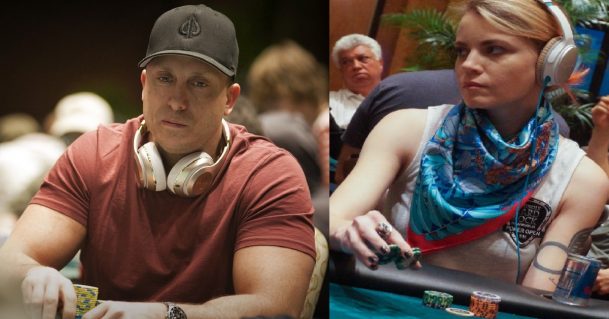 Mike Dentale and Cate Hall are ready to battle for bragging rights (and money) on Poker Night in America on March 19. (Image: pokerground.com)

Poker Night in America will air the heads-up cash game battle live on Twitch at 3:30 pm EST on Sunday at Sugar House Casino in Philadelphia. Doug Polk and Shaun Deeb will be in the booth providing analysis. The format is a best-of-three match, with a $15,000 buy-in for each No Limit Hold’em game.

The blinds will be $50-$100, and play will continue for each match until one player busts. Which, given that each match could theoretically be over in one hand, might be very quickly.

Match Made in Heaven (or Hell)

The heads-up match is the result of two poker players who got into an argument on Twitter back in December. Dentale and Hall traded insults for days before finally agreeing to a time and place to settle the dispute.

It’s no secret that no love is lost between these two. Dentale has accused Hall of being a “crackhead.” And she thinks he’s a terrible human being. They both affirm that the other is a terrible poker player.

Dentale and Hall may not exactly be household names to many casual poker fans. We aren’t talking about Phil Hellmuth and Daniel Negreanu here. But these rivals have become Poker Twitter legends.

Dentale is considered a loose cannon. The Brooklyn, New York native owns a window installation company in his hometown. As a poker player, he has more than $1.4 million in live tournament winnings. His biggest score was for 1st place at the 2015 Borgata Fall Poker Open in Atlantic City ($336,331).

He is more on the politically conservative side than Hall. But, like her, he is very outspoken. Some consider him a “loudmouth.” Others, including his upcoming opponent, think he is downright rude.

Hall is on the opposite end of the political spectrum. She is dubbed a “social justice warrior” and a liberal. The former lawyer from Arizona has $878,000 in career tournament winnings, but she has yet to win a major tournament.

Who Has the Edge?

Those interested in the heads-up match have expressed their opinions on who will win all over social media, of course. Many are even placing bets on the projected winner. Playboy Dan Bilzerian said Dentale will win, simply because “women can’t play poker.”

Matt Glantz claims 100 percent of the money bet on Hall came from Hillary Clinton supporters and those betting on Dentale are all Donald Trump voters. Brian Hastings, however, voted for the former First Lady and wagered on Mike.

A few other Trump and Clinton supporters disputed Glantz’ assertion. What is almost certain, however, is there likely won’t be many Trump voters cheering for Cate, or many Hillary voters rooting for Mike.

As former boxing referee Mills Lane used to announce, “let’s get it on!”