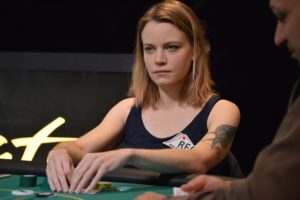 Cate Hall and Mike Dentale got in a heated argument on Twitter. (Image: en.clubpoker.net)

Cate Hall isn’t one to shy away from an argument. If she believes strongly in something, she will voice her opinion on that topic. Her liberal views have caused many in the poker community to despise her, however.

One of the haters is Mike Dentale, another extroverted poker player. On Wednesday evening, the two butted heads, leading to a heads-up poker challenge and some harsh insults back and forth.

Dentale has had enough of Hall’s anti-Donald Trump posts. She’s considered a “social justice warrior” by Dentale and other Conservatives within the poker community.

Hall is an accomplished poker player. She recently finished 3rd in a $5,000 buy-in event during the WPT Bellagio Five Diamond World Poker Classic ($95,000), and came in 6th at WPT Maryland Live! in October. But Dentale thinks she’s a donkey and wants to prove it by crushing her soul on the felt. It all started with one little insult.

“I heard @catehall has been playing well. Funny when the cards don’t go your way you have to rely on skill,” Dentale posted on Twitter.

“Bro you do a lot of talking. If you want to play HU tonight or any other time, I’m game,” she fired back. And then it was on. We’ll let the poker players do tell the story for us this time.

A challenge was made. Now it’s time for Dentale to decide if he wants to accept her challenge or walk away. Let’s just say he didn’t choose the latter.

“you’re a horror, easy game when you make top pair & back into straights, it’s called running good, when out to the test your clueless,” he shot back.

“so when do you want to play, big man?” the so-called “social justice warrior” asked.

“tomorrow,” he said. Hall told him to name the time and place. After a series of insults, the two struggled to come up with an agreement on time, place, and stakes. But they continued firing jabs at each other.

“Do You Kiss Your Mother with that Mouth?”

After Dentale called her poker skills “atrocious,” he offered to let her keep her money and, instead, wear a Donald Trump hat and stop posting about politics. Hall wasn’t cool with that offer.

She wants to play for money and refuses to back down from her political stance. Instead of agreeing on a time and place, they decided to insult each other like mature adults do!

“you are irrelevant, the only reason you get coverage is because you have a vagina. Poker needs this, and your running good,” he claimed and then got even nastier. “your a slut a tramp and a crack head.”

Hall was equally direct in her criticisms of Dentale. She labeled him a “scumbag,” “coward,” and “a train wreck of a poker player.”

“This is genuinely the single most pathetic thing I’ve ever seen in poker,” she said. “Not like the scummiest or worst. Just the most pathetic sad sack how do you even look at yourself in the mirror type thing.”

After a barrage of insults, the two never came up with an agreement. A heads-up match doesn’t appear to be in the works despite efforts by Matt Glantz and others to get a live stream of the match set-up.

But this probably won’t be the end of the Hall versus Dentale battle.

This is such a sleazy article. The stuff that guy retweeted is no acceptable and should not be tolerated in the poker world.

This article made me laugh, I never really understood the reasoning that some people think they have the right to “Say what-ever they may feel”. I mean to call someone a “Slut/Whore+Crack Head”, because your what “Rich/Famous/Well Known/Well established poker player, In the poker community”, Is soooooo laughable.

I hope they play and that she crushes his soul

As far as I know, he still hasn’t put up the escrow, he does nothing for the poker world but bring shame to it.