As a man with an artificial knee and an artificial hip, limping is often at the center of my thoughts. But are the pundits correct when they claim we should never limp in no-limit hold’em?

“If a man neglects education, he walks lame to the end of his life.” 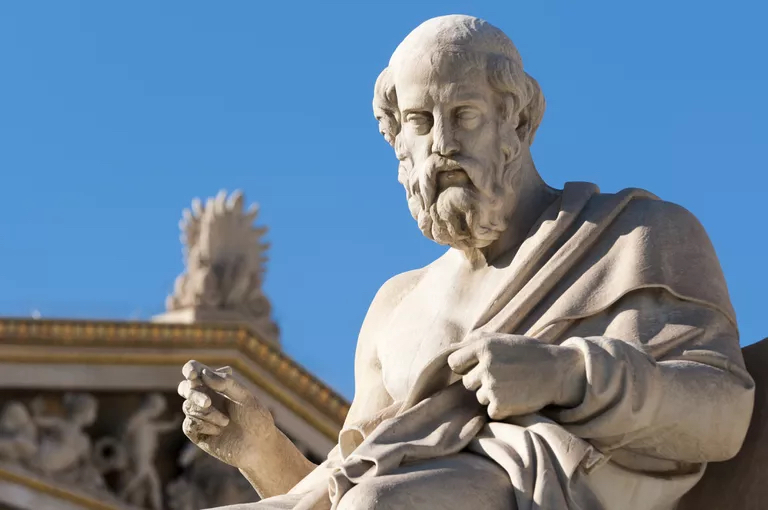 The philosophy that you should never limp into a pot certainly isn’t set in stone. (Image: araelf/Getty)

When I first started playing NLH online, I was somewhat loose and very passive, with a 22/4 VPIP/PFR playing stat. This style wasn’t particularly successful, so I embarked on a research project that led to my first poker book.

Eventually, I realized that I needed to tighten up and be more aggressive. Doing so, I eventually achieved a 15/12 playing stat; if I played the hand, I nearly always raised. (Occasionally I would flat a raise ahead of me rather than re-raising.)I analyzed six million hand histories and plotted the win rate (in BBs per 100 hands dealt) versus how often players open limped (LFI) or limped behind (LWPC). Figure 1 summarizes these results (updated from my books). 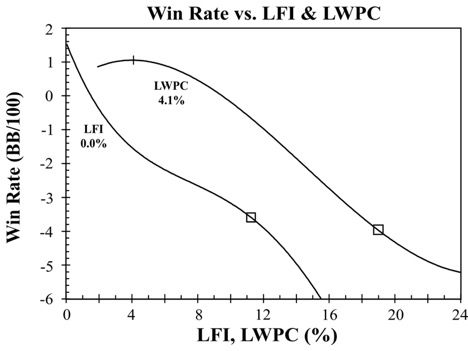 We can see from these curves that our profit is maximized when we never LFI and rarely LWPC. In fact, since the LWPC curve is flat near the peak, we woldn’t go far wrong if we adopt the philosophy of never limping. When we limp online, we are often punished. Strong players realize this and rarely limp. This also has the great advantage of being an easy strategy to remember.

When I moved to Las Vegas 10 years ago, I began to play a lot of $1/$2 NLH at my local Red Rock poker room, and found that my “no Limp” philosophy wasn’t working. (I wrote a book about that called Beat the Donks.) Simply speaking, the donkeys just wouldn’t fold, even when I increased the size of my raise. What in the wide, wide world of sports is a-goin’ on here? 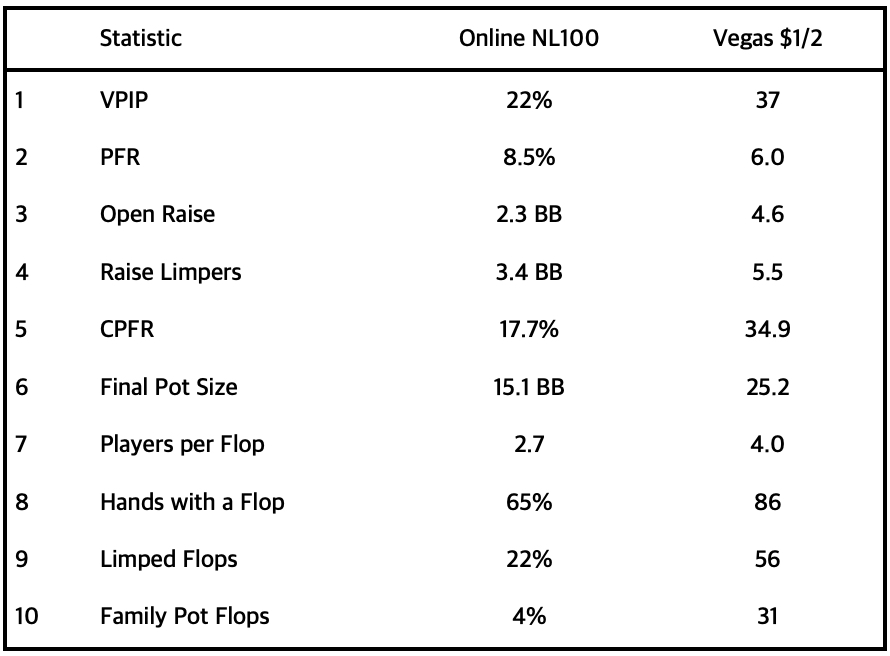 The answer is that these Vegas games proceed quite differently than online games do, as you can see from Figure 2. They’re looser and more passive. Pre-flop raises are much larger, and players call these raises much more loosely, producing much larger pots. Vegas players are much less likely to punish limpers, and more likely to pay us off. In short, Vegas $1/$2 players aren’t very good.

The risk vs. reward balance is much different in the Vegas game. The typical online open raise is only 2.3 BBs, and only 3.4 BBs with limpers. Only 65% of online hands see a flop, and only 22% of these flops were limped. Furthermore, our pre-flop raise isn’t often called, so we can see that our small pre-flop raises accomplish quite a lot online; we win the pot immediately about a third of the time, and we’re usually heads-up when we see the flop.

Since we must make bigger raises in a Vegas game and are less successful doing it, we should be less willing to raise as pre-flop bluff. Yet, the average winning Vegas pot is 67% larger than it is online, so folding these marginal hands doesn’t seem attractive either. So, we’re left converting some of these online raising hands into Vegas-limping hands.

Suppose we have pocket 2s on the button in a typical, online NL100 game. There’s one limper, and we rarely limp behind. So we raise to 3.5 BBs and take down the pot a third of the time. Most other times, we play a heads-up pot in-position. Our post-flop playing skills should make this a profitable situation for us.

Now consider the same situation in a Vegas $1/$2 game. We’re on the button with our pocket deuces, now facing three limpers. A normal raise here would be about $16, and we would rarely take the pot down right away. Oftentimes, in fact, we’d likely face at least two villains on the flop. Since it’s more difficult to outplay two villains than one, profitability is much more questionable if we raise here.

Limping, on the other hand, is relatively safe since the blinds rarely try to steal the pot with a bluff-raise. Limping will usually create a 6-way family pot, an excellent situation for our pocket 2s. We’ve risked only one BB to play the hand, and we already have nearly the correct odds for set mining. Furthermore, when we do flop a set, we’re much more likely to win a big pot since we are facing five villains who are often very sticky.

Obviously, we shouldn’t be limping every time. When we have a value hand, like TT+, AQ+ and some other strong starting hands, we should raise for value. But which hands should we limp with?

The key factors here are hand potential, table position, and the number of players we’re likely to face.

Limping with a hand like 72o is clearly bad since it has so little potential. But small pairs, suited connectors, and suited ace-rags have a lot of potential since we can more easily flop big hands (at least two pair), and big draws (at least eight outs).

Our table position is also important. When we’re last to act, we’ll be able to steal a pot more often when we miss, which means we can play a wider range of speculative hands than we can in early positions.

The number of players we expect to see the flop is also important. Strong speculative hands like suited connectors and suited one-gappers are better against lots of opponents (so-called volume hands). When we’re on the button with only one limper, however, we may be better off raising these same hands, hoping to win immediately or to play a heads-up flop.

We can play a wider range when we add limping to our Vegas strategy, perhaps increasing our playing stat from 15/12 to 19/9, which is somewhat looser and less aggressive than it should be online.

Don’t listen to those experts who command us to never limp in a cash game. Although this is usually good advice when playing online, limping can be a great option in a Vegas $1/$2 game. When the game is passive, limping behind is usually successful, and we’ll see flops with low risk and great implied odds.  Furthermore, limping can lower our variance, which can make the game less stressful and more enjoyable.

Although I am not a fan of limping, I got to say, in live cash games, players really do call with anything pre, regardless of the size. Online, not so much, therefore, betting pre online is mandatory! Live it’s either, limp along, or tighten up so much that it’s painful to play!

I would really really like to see a thread created by you, about limping. It should start a wider discussion about it which could prove to be beneficial for most CC users!

This is a great article to get the thought juices flowing. It especially enforces the often stated concept (without actually saying it) that when you play poker you should play according to the situation and not just play your cards. You have to take everything into account, including the style of play of your opponents and what a typical hand of cards looks like in order to maximise your chances of winning. I agree with Bozovicdj, that a strategy article on limping as part of the forum challenge would be good to see what others think on this challenging subject, that many players can’t get away from as they simply want to be part of the hand and see some action.