Cash Game Strategy for the Rest of Us: How Tight is Really Right?
August 28, 2019 Poker Strategy

Cash Game Strategy for the Rest of Us: How Tight is Right?

One of the key leaks made by Vegas low-stakes cash game players is that they play far too many hands. They play about 70% more hands than the average online player (37% vs. 22%), and even those online players are too loose. Let’s try to determine how many hands we should actually play.

Poker is a lot like sex, everyone thinks they are the best, but most don’t have a clue what they are doing.”

VPIP% stands for “Voluntarily Put money In the Pot”, which is just a measure of our looseness; the higher our VPIP%, the looser we play. This stat includes only hands we voluntarily fund, and doesn’t include hands where we post a blind but don’t put additional money in the pot.

In my first book, The Statistics of Poker, I analyzed about 6 million hand histories for online NL50 and NL100. Figure 1 plots the average Win Rate for these online players as a function of their VPIP percentage, with a peak win rate of 1 BB/100 at a VPIP% of 14.8%. 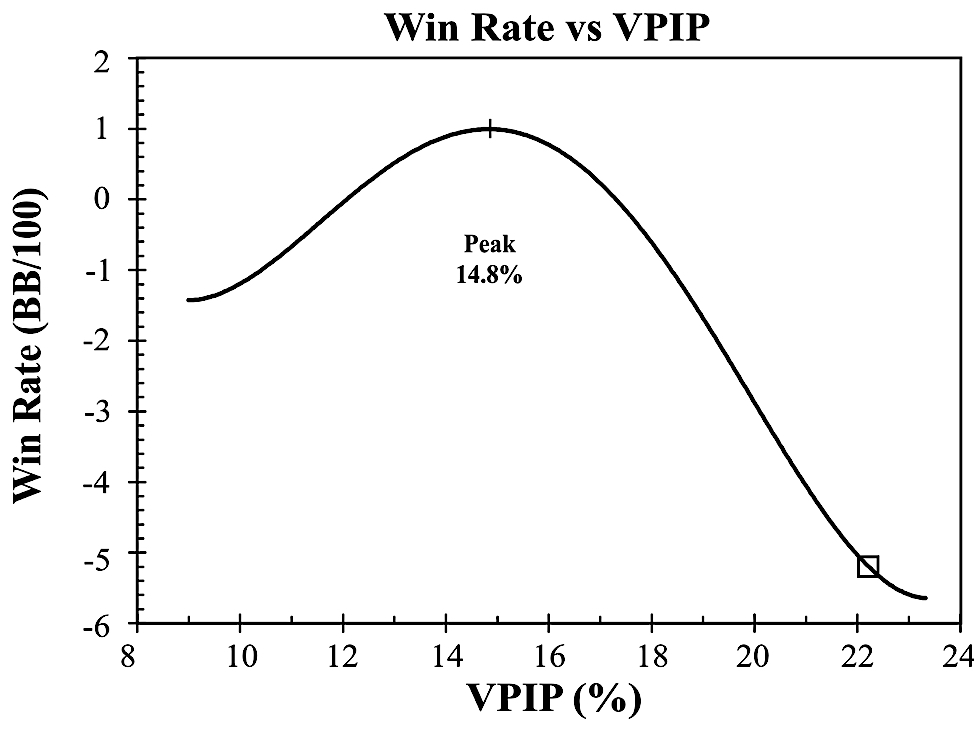 Figure 1. Win Rate (BBs per 100 hands dealt) vs. VPIP% for online NL50 and NL100 should be a key determinant of cash game strategy in low-stakes Las Vegas poker rooms. The square symbol is Mr. Average.

However, this plot does not mean that a 15% VPIP% is optimal. The average 15% player is mixture of strong and weak, with a win rate that depends on more than just preflop hand selection. So the strongest 15% players will win more than 1 BB/100. Furthermore, the best online players can play somewhat looser due (in part) to their superior postflop skill.

I have analyzed the online data in several different ways and have concluded that the optimum online VPIP is about 16 percent.

Too Tight > Too Loose

Notice that this curve is fairly flat near the peak. So we could play anywhere between 13% and 17% of our hands without much variation in profit. If our postflop play is a bit weak, we might choose to play on the tight end of this range. If we are skillful, we might make more money by playing at the loose end of this range.

On the other hand, playing too loose is clearly very damaging. Even Mr. Average (the square symbol) loses about 5 BB/100 while playing 22% of his hands.

Generating a similar curve for live NLH would require much more information than is available. We would need to know the VPIP% and win rate for a large number of live-action players, which is practically impossibile. Unfortunately, the 37% average VPIP% for Vegas $1/$2 players is not linked to individual players and their win rates.

But we can make some educated guesses. To begin with, the average pot size is larger for Vegas $1/$2 than for online games (25 BBs vs 15 BBs). This is likely the result of larger average preflop raises (5.1 BBs vs. 2.6 BBs) and the higher average number of players seeing a flop (4.0 vs. 2.7). With more money to be won, we should be able to play more hands, especially when we have good position.

Additionally, the average Vegas $1/$2 player is far weaker than the average online NL50 player. Indeed, my Vegas $1/$2 earn rate is much higher than my online NL50 earn rate. Since our Vegas opposition is weaker, we should be able to play more hands in the right circumstances.

Live play also allows a strong player to acquire information not available online, such as physical, verbal and timing tells. For example, when we are in the cutoff and know the button intends to fold, we can play a wider range. Or when we know our opponent plays a fit-or-fold postflop style, we can widen our range against him when we will have superior position.

Finally, since the average Vegas player raises less often than an online player (6.0% vs. 8.5%), we will be able to play a wider range as our position improves. Suppose the average preflop raise percentage is 6.0% and we are 6th to act (we are in the hijack seat in a 10-handed game). The chances that we are facing a raise is (1-0.946) = 31%. But if the average PFR% is 8.5%, we face a raise 41% of the time. This means we can play our maximum range more often when we play on the more passive table, which increases the average number of hands we play.

Each of these factors implies that the optimal Vegas $1/$2 VPIP percentage is higher than my 16% online estimate. It may not be possible to determine the optimum value analytically, but I expect it to be about 20%, depending on our skill level. This is still much lower than the VPIP% for the average Vegas $1/$2 player.

It should be clear that playing as many hands as the average Vegas $1/$2 player (37%) will seriously damage our win rate. We can’t maximize our profit by playing as loose as our opponents do. Instead, we should exploit their looseness by playing a relatively tight game ourselves, perhaps playing only 20% of our hands overall.

But our average VPIP% goal is only a marginally useful stat since the value of position in our hand selection is a much more important factor. This is the subject of my next article.

Steve Selbrede is a retired Silicon Valley engineer and executive living in Las Vegas. He is the author of six poker books, including his most recent Tournament Poker for the Rest of Us (presented by CardsChat). Figure 1 in this article comes from Vol. 1 of his three-book series Donkey Poker: Crushing Low-Stakes Live NLH.

Festivus for the rest of us