CardsChat Poker Podcast: Are WSOP Sessions Too Long, and Who Is Dan Zack?

A cash game specialist named Dan Zack with minimal tournament results leads the WSOP Player of the Year race one-third of the way through the series. That and more World Serries of Poker action on this edition of the CardsChat Poker Podcast. 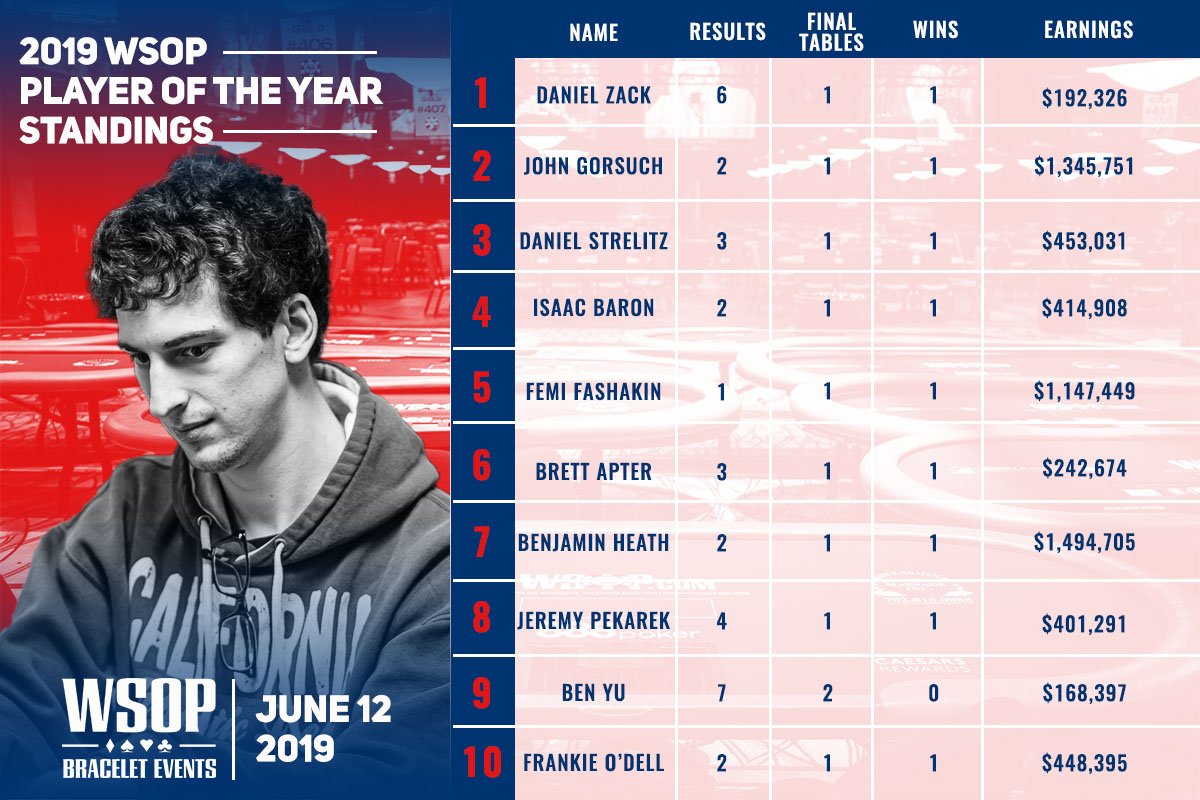 Cash game standout Dan Zack is atop the WSOP Player of the Year leaderboard, despite a relatively paltry sum total of tournament payouts. (Image: Twitter/PokerCentral)

I sat down with Ben Abrahams, a Las Vegas local poker grinder and founder of a poker charity called Chai Poker, to discuss the first couple of weeks of the 2019 WSOP, what he thinks about Zack’s surprising POY lead, and his issue with playing long sessions in the low buy-in WSOP tournaments.

Poker isn’t supposed to be easy. The challenge of striking it rich or even earning a living isn’t just reading your opponents. You also must have endurance to play long sessions.

In my conversation with Ben Abrahams, he mentioned his disdain for a lengthy session he was forced to play on Day One of the $1,000 DoubleStack No Limit Hold’em event. The Las Vegas low-stakes cash game grinder, who also dabbles into tournaments occasionally, said he played nearly 14 hours before busting prior to the session concluding.

Ben is used to playing long hours, but feels 14 hours is a bit extreme. I can understand his opinion, but with such massive events, I am not sure there’s a way to shorten the days. If the daily sessions aren’t lengthy, these lower buy-in tournaments would carry on for way too long.

Prior to the start of the WSOP, I predicted one of 14 players would win Player of the Year. I threw out names such as Daniel Negreanu, Shaun Deeb, and Chris Ferguson. Dan Zack’s name wasn’t even in consideration. Yet, here we are one-third of the way through the series and he sits atop the standings.

Zack won the $2,500 Limit Mixed Triple Draw for $160,447 and already has six other cashes. It’s not that he isn’t capable of performing at a high level. After all, the “Live at the Bike” regulars is one of the top cash game players in Southern California, and arguably the world.

Zack’s pre-2019 WSOP tournament resume isn’t lengthy because he rarely plays tournaments. Still, it’s surprising to see a non-tournament player topping the POY standings, even though said player is one of the most talented grinders in the game.