In the  2016 World Series of Poker, the only bracelet still up for grabs is the one for the Main Event. That will be settled on November 1. With the summer session concluded, it’s time to honor the best (and worst) performances of the year.

Our Pick for Top Player of the Series

In most years, Benny Glaser, Ian Johns, and Justin Bonomo would be more than deserving of this honor. But this isn’t a normal year. Jason Mercier was, unquestionably, the top player at the 2016 WSOP. 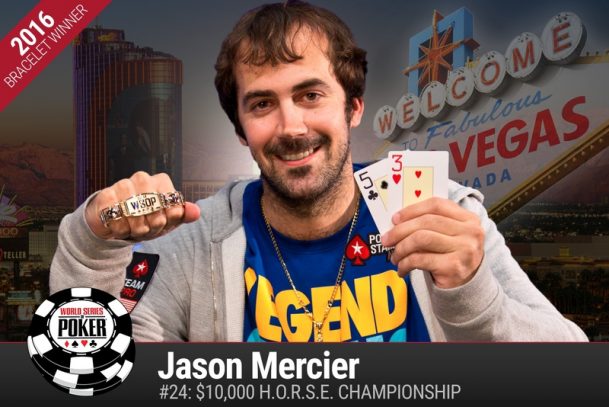 Jason Mercier won a pair of bracelets at the 2016 World Series of Poker, for which he earns the coveted CardsChat Top Player of the Series award.  (Image:  WSOP.com)

He set a goal of winning three bracelets and almost pulled it off. The Floridian won two, finished 2nd in another event, and cashed 11 times. Within a five-day span, he finished first-second-first in World Series tournaments.

There were many exciting happenstances this summer. Not all of them were positive, of course. Chris “Jesus” Ferguson and Howard Lederer returned to the Rio for the first time since 2010. Some would consider this the top story line of the 47th annual World Series of Poker.

But we choose for our top moment one involving Ryan Laplante, a self-proclaimed openly gay poker player. He won Event #12, the $565 Pot-Limit Omaha championship, beating out 2,483 players for his first career bracelet.

The most memorable part of this tournament was Laplante’s bracelet ceremony speech. A teary-eyed Laplante, shortly after the terrorist shooting of more than 50 attendees at a gay nightclub in Orlando, gave one of the most heartfelt speeches in WSOP history. We admit we’re a bit prejudiced in his favor, since Laplante was also a member of our Team CardsChat Crazy Eights roster. So sue us.

Hot on his heels, we’ll give honorable mention to Jason Mercier, though. After his longtime girlfriend Natasha Barbour busted 3rd in Event #59, the $5,000 No-Limit Hold’em, the poker pro popped the question, and presented her with a ring, for what must surely be one of the more unique proposals of all time. And yes, she accepted his marriage offer right in front of a room full of poker players.

Competition can bring out both the best and worst in human nature. We see gamesmanship and skill, and sometimes, we also see really, really sore losers.

Among the bad beat stories and the inevitable whining that accompanies it, Shane Warne’s surely stands out as the highlight of the Series. The former Australian cricketer went legend on Twitter (for all the wrong reasons) after busting out of the Main Event.

“Still in shock at what just happened, so sick ! If anyone says that’s poker I will put 1 on their chin, game of skill my arse, get f#@?#%,” he continued. “Has it ever happened in the history of the #WSOP main event that a player gets Aces 2 hands in a row & both get cracked ?,” Warne then asked, and we’re pretty sure he must have received a few choice responses.

Women of the Year

We were almost a month into the World Series before a woman took down an event, in this case, Event #46, the $1,500 Bounty No-Limit Hold’em. The honor went to not-quite-30-year-old Kristen Bicknell, who scooped up $290,768 for her efforts.

And she opened the door for more ladies’ wins, which included Event #50, the $1,500 Shooutout No Limit, won by Russian Safiya Umerova. The L.A.-based player said she had benefitted from massive preparation for her event.

Also doing the ladies proud was Detroit’s own Courtney Kennedy. Herself a poker dealer back home, Kennedy clearly had studied the game, and went back to Michigan with $149, 108 and a shiny new gold bracelet for winning the top prize in Event #65, the Ladies No Limit championship.

Who says grandpa can’t play poker? T.J. Cloutier, at 76 years old, finished 14th out of 6,927 players in Event #41, the $1,500 Monster Stack No-Limit Hold’em championship. The legendary pro, who was playing poker before some of the entrants’ parents were born, won $61,598 and came close to winning his 7th career bracelet.

But as impressive as Cloutier still is, we have to pass this honor instead to 2015 November Niner Pierre Neuville. The 73-year old Belgian cashed in four WSOP tournaments this season, including a runner-up finish in Event #10, the $1,500 No-Limit Hold’em 6-Handed championship. Neuville also finished 15th in the Hollywood Poker Open this summer. We can only aspire.

We’re still determining what our lucky winners will receive. It could be a long time, actually. So we suggest you all just revel in the glory we have bestowed upon you, and come back next year even more determined to wear the sacred mantle of a CardsChat World Series award winner.

Lederer and Ferguson busted out of the Main Event early, less than an hour apart from each other.

Ferguson cashed 10x in this year’s WSOP, including a 4th in the $10k 6-max NLHE. Pretty decent after a layoff.