The 2020 World Series of Poker Online Bracelet Series in Nevada and New Jersey was comprised of 31 events. Nathan Gamble only played in five. 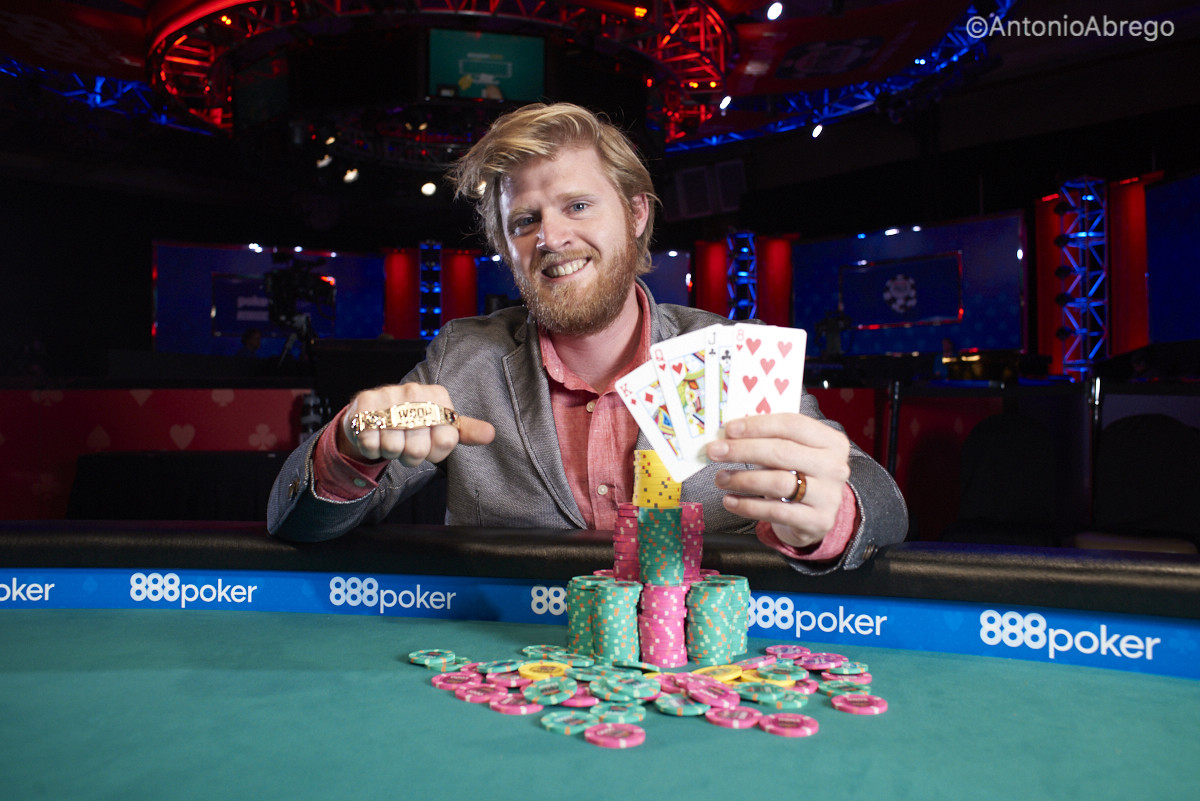 As a mixed-game specialist who doesn’t find much enjoyment in playing No-Limit Hold’em, Gamble skipped all but one of the 27 No-Limit Hold’em events on the schedule. The one exception was the $500 Super Turbo that he felt wouldn’t feel like the grind that most no-limit events do. He finished in 66th place for $1,220.

Gamble’s first WSOP bracelet came in 2017 when he won the $1,500 Pot-Limit Omaha 8 or Better bracelet event for $223,339. Since that win, he’s played in nine other WSOP PLO8 events, cashing five of them with five top-18 finishes, including this summer’s bracelet victory.

We chatted with Gamble about what drew him to mixed games, why he still loves them today, and how his two bracelet runs compare.

Gamble’s interest in poker was sparked at a young age when, as a young teenager, he watched his father play poker with his friends. Gamble was drawn to the camaraderie these men shared as they drank beer, told jokes, and played cards.

Long before he was old enough to legally play, Gamble started to play poker online with free money. He finally asked his father for $11 to play in a tournament on Ultimate Bet. When the tournament was canceled, he asked his father if he wanted the money back, but was told that he could keep it.

And so his real-money journey into poker began. It wasn’t long before Gamble’s bankroll had dwindled to under $2.00. It was at this point that he expanded his poker horizons.

“I started surfing around games other than No-Limit,” Gamble said. “And I came across Royal Hold’em, which was on Ultimate Bet at the time. It was only 10s through aces. Like ultimate short deck. No one even remembers that was a real game.”

Gamble said it didn’t take long to develop a winning strategy for the game where many of his opponents played less than optimally.

“I realized that people were playing it terribly. People would routinely get all-in on the flop with a straight. And I realized that every board ran out Broadway, full houses, or quads. So I’d just sit there and wait for top set or middle set and they’d pump it all in and give me excellent odds to call and fill up.”

From there, Gamble said, he began investigating other games including Stud, Stud 8, and Limit 8.

“Built that $1.50 up to $1,600 over the course of a month or two. Just realizing that people were playing games other than hold’em terribly. That really started my love of just looking for other stuff when I was 12 or 13 years old.”

How His Two Bracelets Differ

Gamble had a fan who had video footage of his 2017 WSOP bracelet win reach out to him on Twitter. The fan had just been passing through the halls of the Rio’s convention center that day to take in the WSOP experience. He ended up recording the final table and sent that video to Gamble, who watched it again after winning his second bracelet.

“You see on my face the relief, the disbelief. I have one friend in the crowd. I point to the bracelet and mouth ‘I just won this. How did this just happen?’”

Gamble relayed how it all happened so fast, with heads-up only lasting for one hand and the final table going from four players down to just one in about 20 minutes. “I did the interview, took the pictures. Wandered around in the hallways for 15 minutes. Then walked into the main room and just said ‘put me on for 20/40.’”

And without telling anyone that he’d just won a World Series of Poker bracelet, Gamble decompressed from the adrenaline of his big win by playing in the cash game.

How did the experience of winning his second WSOP bracelet at home last month compare to winning it in 2017 at the Rio?

Told my wife this was my best chance at a bracelet…. so I did a thing. Thanks for the support everyone! pic.twitter.com/Ak1jgNPr96

“That first bracelet was me. It was all me. It was just one friend in town who happened to stumble onto the final table,” Gamble said. “This time, I had the support of so many more friends that I’ve met through poker. Ali Nejad, Brandon Shack-Harris, Andrew Yeh, so many more. As I’m on the final table they are railing, watching, calling me on breaks. Even though it was in my house, three in the morning, I had 30 times the amount of people in my corner. That meant more to me than actually winning the bracelet.”

How They Are the Same

There was a lot of debate in the months and weeks leading up to the WSOP Online Series about the legitimacy of the WSOP bracelets being awarded. Gamble’s friend, Shack-Harris, was one of the most outspoken critics about the brand being devalued by these bracelet events.

A rant about @WSOP pic.twitter.com/s9WKUmErRz

“Coming into the series, I was much more along the lines of not loving it. I thought it might devalue the brand and was a money grab. I told Brandon [Shack-Harris] that I’m not approaching this to win a bracelet, there’s just a lot of money up for grabs in some tournaments that don’t usually run. When will you ever have a PLO8 tournament online with $90k for first place? I was in it for the money, not the bracelet.”

But as the field dwindled down in Event #6, Gamble felt his mood begin to shift. “It hit me the hardest when we got heads up. I had a 6 or 7 to 1 chip lead, and thought oh man, this is going to be awesome, I’m going to steamroll my way to victory. But then he fought back and took the chip lead. And then it hit me, not only the 40K difference between first and second, but the bracelet.”

Gamble said he experienced the same feelings when he won his online bracelet that he did when he first won a bracelet live at the Rio.

“When I won, I had the same reaction I did the first time. The same disbelief and adrenaline, the sense of wonderment that I did it again. So all that doubt of ‘oh its not a bracelet, it doesn’t mean as much, I’m just doing it for the money’, it went away. In that moment, when you win that bracelet, it’s the exact same thing. There’s no question about it. There’s no difference between it. You just won a bracelet.”

Gamble wishes that No-Limit Hold’em tables were as lively and fun as mixed-game tables are. He described the scene he often saw from his seat at the Wynn’s $80/$160 mixed-game table before the COVID-19 shutdowns.

“We are typically sat beside the 10/20 no-limit tables in the back room. You don’t hear them say a word. And we will look over sometimes and they have solvers up on their computers as they are playing live poker. They play a hand, and then win or lose, they turn to the laptop and plug the hand in. They aren’t talking to each other. It’s such a weird environment right now.”

“We’re talking, chatting, giving each other hell. We have a group chat with pictures of everyone messing around and having fun. It’s a different world. We’ll go out and have lunch. We’ll get done playing at 4 or 5 in the morning and go grab tacos.”

Got the Bracelet in today and I think my dogs enjoyed unwrapping it more than me! #wsop #pups pic.twitter.com/yXxv6mVmCW

Gamble understands that the complex nature of No-Limit Hold’em makes it a bit more difficult to be as conversational and relaxed as mixed games allow for. But he also feels that players sometimes lose sight of the big picture.

The reason you’re at the table doesn’t really matter, Gamble believes, as long as you’re getting something positive out of the experience.

“Take a billionaire hedge-fund manager. He’s not in it for the money. So why is he there? He enjoys challenging himself. And he enjoys talking with people, and enjoys just chatting and hanging out with everyone. And he’s good for the game. He’s going to provide money to the economy long term. So I want him to have fun. I’m also helping poker by having him stay around a while.”

On a personal level, Gamble added, he enjoys talking to those people.

“[In] what other profession can you sit next to a 21-year-old poker pro high school drop out, a hedge-fund billionaire, and a Hollywood lawyer? It’s the weirdest environment and you get to meet so many people that you’d never have the chance to meet in normal life.”

Gamble commends guys like Joey Ingram, Phil Galfond, and Matt Berkey for making poker more fun and accessible to new players with their content online. He talks about how he used to send emails of hands he had played to random professionals for feedback, and it was the players like Justin Bonomo and Alec Torelli who took the time to respond to him who had a positive impact on him, and helped his love for poker grow.

He hopes to follow in the footsteps of these players by being an ambassador for the game, and he encourages others to do the same.

“The three reasons for playing poker don’t have to be independent of each other. Just because you are winning money and you have a great lifestyle, even if you are No. 1 in the world, doesn’t mean that you shouldn’t be friendly and that you don’t owe it to the community to give back.”