The CardsChat community has been well represented on poker livestreams in recent months. This past weekend, two of our forum members – Jacki Burkhart and Kirsten Olieberg – showed off their skills on “Poker Night in America,” and both were winners. 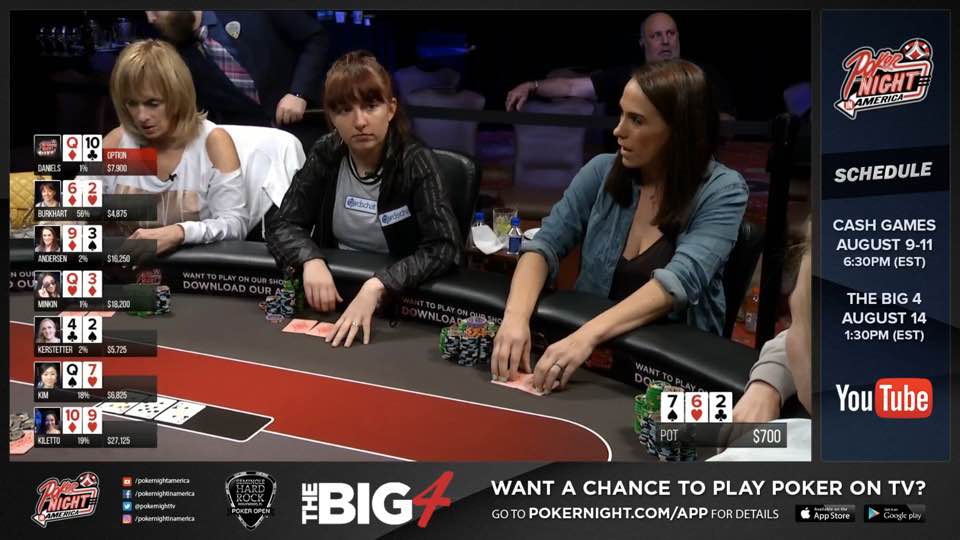 Here’s the forum thread where the CardsChat representatives got ready to play.

Burkhart, who is no stranger to playing in front of a camera having final tabled the 2018 WSOP Ladies Event (5th place for $28,167), appeared on Friday’s session while Olieberg, a new CardsChat member, competed on Saturday evening from the Seminole Hard Rock Hotel in Hollywood, Florida.

The session didn’t start well for Burkhart, a CardsChat forum member since 2013. At one point, she was nearly felted. But the poker player from Oregon persevered and not only got un-stuck, she turned an impressive $6,925 profit. Only Minkin, who won $14,700, ran better.

Burkhart’s rebound began when a lucky river card hit in a $10,000 pot against Lily Kiletto. Holding K-4 on a 8-7-2 flop, Jacki unsuccessfully attempted to take the pot down with a bet as her opponent had top-two-pair.

But a K on the turn gave the CardsChat member some hope, so she called a bet from Kiletto. When the 4 hit on the river, giving Burkhart a better two-pair, she called a sizeable bet and took down a massive pot.

Man at the Table?

On Saturday’s session, the women wore animal onesie costumes to the table. CardsChat member Olieberg, dressed as a panda, while also sporting a CardsChat patch.

She played for more than six hours, mixing it up in many hands while turning a $2,300 profit. Olieberg’s lucky runout that helped her out came in a hand against Lexy Gavin. Olieberg flopped an inferior flush draw but ended up hitting a straight on the river to win a $3,150 pot.

One surprise occurred when Randall Emmett, a movie producer and poker enthusiast who loves to pop in on various livestreamed poker shows and also wearing a onesie, joined the Ladies Night table.

Emmett is a likable, funny rich guy who can be a bit loose with the calls though, so maybe it wasn’t a total surprise when they let him buy in late in the session. But he ran rather well and finished the night turning a $7,375 profit.

But the big winner of the PNIA two-session Ladies Night episodes was Danielle Andersen, who turned a small profit the first night, and finished up $10,250 the second.

wow very good news, it’s good that a CC woman has come so far, that inspires to continue learning from this great forum.