The CardsChat forum reached a historic milestone Friday, signing up its 250,000th member. To celebrate, CardsChat arranged for nearly $26,000 in online poker freerolls and money-added games in August. 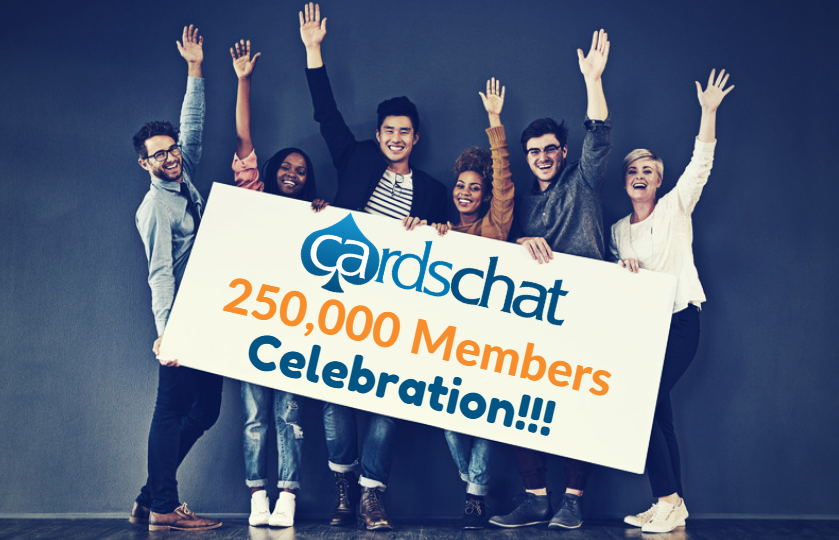 Raise your hand if you love talking poker with your friends and tablemates in the CardsChat forum? (Image: CardsChat)

The freerolls and special events began on Saturday, and continue throughout the month. Here’s the official thread for forum members with a guide to all the bonuses available.

These bonuses are in addition to usual forum freeroll offerings, bringing the total giveaways available to CardsChat members for August to nearly $40,000. The extra cash and CardsChat Celebration Freerolls are spread over 11 different events, which are open to all forum members.

The first two of four kickoff tournaments took place this weekend, with the winners receiving free tuition into Daniel Negreanu’s new poker MasterClass. The remaining two are open to all members and run next weekend, Aug. 11 and Aug.12

“Our forum members learn quickly that the more they hang out at CardsChat, the more there is there for them,” said Tammy Parker, lead forum moderator at CardsChat. “It’s getting together with friends, playing poker with your buddies. That’s the sense of community we try to keep.”

In addition to the poker payouts, the month of August has special SWAG awarded to players who go out on the bubble as well as top winners in the freerolls — hoodies, t-shirts, card protectors and the like.

The forum also held a contest to guess the date the 250k barrier would be broken. For being the first forum member to pick Aug. 4, jimlahey7 won $100 and a CardsChat hoodie.

Long before CardsChat became a go-to source for news about poker, the site was just a forum — an online destination for poker players to gather, and (ahem) chat about the card game they love. That was 14 years ago. Since then, CardsChat has grown and evolved, with community members hailing from 190 countries.

“There was a time I could log on and read every single post,” said Parker, known on the forum as JuiceeQ. When she joined in May 2005, there were “about a thousand, maybe 1,500” members.

While CardsChat’s forum has a reputation as a welcoming place for beginners and intermediate players alike, the strategy sections have seen some members emerge as serious players with great tournament potential. Most notably, poker pro and CardsChat ambassador Ryan LaPlante is a longtime forum contributor who’s made seven WSOP final tables and won a bracelet.

Since its founding in 2004, CardsChat has given away more than $3.5 million in poker winnings. In that time, the CardsChat forum has hosted more than 3 million postings in nearly 250,000 conversation threads about poker with members around the world.

“Some of the people I talk to all the time I’ve never met in real life, or seen a picture of them even, but I still consider them friends,” Parker said. “Even though the size of our forum is so big now, the sense of community is still there. That’s what makes CardsChat special.”

this is awesome congradulations on yalls growth !