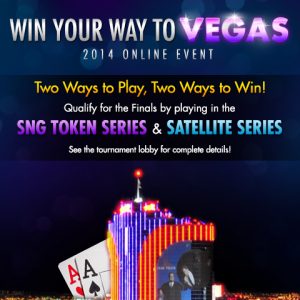 The popular poker site Card Player Poker is giving players the chance to play and win their way to Las Vegas with some exciting packages.

Several online poker sites frequently hold a series of promotions and tournaments to attract players. Even a well-established site with a recognizable brand name will introduce something exciting to lure in visitors and potential registrations. However, it isn’t too often that these promotions extend outside of online benefits or a decent deposit into players’ bankrolls.

But this summer, Card Player Poker is giving their players a chance at a prize of a lifetime.

Shot at the World Series

Card Player is introducing a promotion that will help players win their way to Las Vegas. But this isn’t just an every day vacation package. Card Player is making this a prize that few poker players could refuse.

Two lucky players have a shot at earning a prize package valued at $2,500. Included is a $1,000 buy-in to Event #56 at the 2014 World Series of Poker. The summer series is considered to be one of the largest poker events of the year. It’s certainly an incredible opportunity for any potential player. The additional $1,500 will go towards travel expenses in a Las Vegas getaway.

Event #56 is a $1,000 buy-in No-Limit Hold ’em event that takes place on June 29 at 12:00 p.m. With the buy-in already paid for by the Card Player prize package, players might already consider themselves in the money. For reference, the same event at the 2013 World Series of Poker had 1,837 entries and saw Matt Waxman become the reigning champion with $305,952.

Players wishing to have their shot at this prize can win by participating in sit-n-go (SnG) games or satellite series. By playing in Card Player’s daily Token SnG games, players will need to earn as many tokens as they possibly can. The top 10 daily token earners for the Way to Vegas SnG games will get an invite in the Way to Vegas Token Level 2 tournaments. A player is allowed one entry per day.

Six times a day during Sundays, the Level 2 tournaments begin. Those who weren’t invited from the top 10 earners can buy their way into Level 2 for 4,000 tokens. Placing in the top two during a Level 2 token game will earn an invite to the token final which takes place on Saturday, May 31 at 3 p.m. PST. Players can also buy into the token final for 10,000 tokens. The winner of the final gets the first prize package.

The second prize package is available by playing through a series of satellites. To start, players can simply buy into a Level 1 tournament for 20 tokens. Qualifiers for Level 1 tournaments run daily every two hours. Finishing in the top two during a Level 1 satellite tournament earns an invite to Level 2. 2,000 tokens can also buy into Level 2 tournaments which take place on Wednesdays at 7 p.m. PST and Saturdays at 3 p.m. PST.

Finishing in the top three during a Level 2 tournament will earn an invite into the Satellite Final which takes place on Friday, May 30 at 3 p.m. PST. 10,000 tokens will also buy entry into the final. Whoever wins the Satellite Final earns the second Las Vegas prize package.

As a bonus to Card Player readers, the site is offering a way to tip the odds in their favor. Free direct entry into a Level 2 tournament can be earned by visiting the Card Player Poker Facebook page. By retrieving the daily promo code posted on the page and redeeming it at Card Player Poker, players can earn one entry to win the Weekly Prize. Each week, five weekly prize winners are invited to play in one Level 2 game.