Back in 2015, the indie poker film Mississippi Grind, which starred Ryan Reynolds and Ben Mendelsohn, opened to positive reviews. Now, the writer-director team of that movie, Anna Boden and Ryan Fleck, have been chosen to direct Marvel’s next big blockbuster, Captain Marvel. 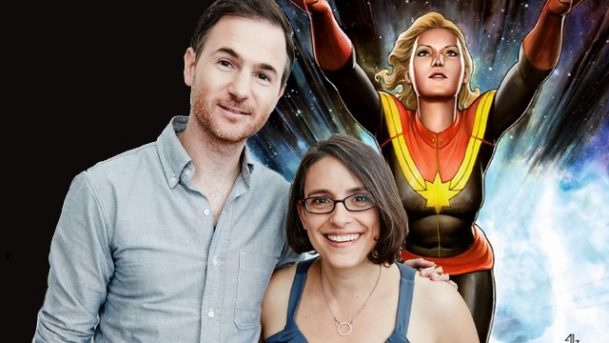 Captain Marvel, which isn’t scheduled to hit theaters until March 2019, will star Academy Award winner Brie Larson and be Marvel Studio’s first female-centric superhero film. Larson will play Carol Danvers, an Air Force pilot who sees her DNA mixed with that of an alien (she gains superpowers, of course) after a freak accident. At least that’s how it went down in the original comic source material.

Unlike Mississippi Grind, a gambling road trip film set primarily to poker, Boden and Fleck won’t tackle writing duties this go-round. Instead, the script is being co-written by Meg LeFauve and Nicole Perlman, who co-wrote Inside Out and Guardians of the Galaxy respectively.

“They [Reynolds and Mendelsohn] were spending a lot of time at Harrah’s playing,” Fleck previously told NOLA.com. “I think Ryan always knew when to walk away. He was like, ‘OK, I get it now. I’m going to go home.’ But Ben would grind it out for marathon sessions. He would play for 12 hours.”

Boden and Fleck previously directed the Emma Roberts and Zach Galifianakis film It’s Kind of a Funny Story, as well as Half Nelson, which launched Ryan Gosling’s acting career. They have also directed episodes of The Affair and Billions, the latter a television show penned by Rounders scribes Brian Koppelman and David Levien.

They also follow in the footsteps of other indie directors who’ve joined the big leagues. For instance, Colin Trevorrow went from directing Safety Not Guaranteed to both Jurassic World and Star Wars: Episode IX, while Cop Car director Jon Watts is the director behind this summer’s Spider-Man: Homecoming.

Other Poker Filmmakers Branch Out

This isn’t the first time a director of a poker film has ventured into the Marvel cinematic universe. John Dahl, who directed 1998’s Rounders (long rumored to receive a sequel), has directed episodes of Netflix’s Jessica Jones and Iron Fist. He’s even directed episodes of Breaking Bad, Shameless, Homeland, House of Cards, and Ray Donovan.

Meanwhile, Zak Penn, who directed 2007’s The Grand, has also dipped his toe in the comic book pool writing films like Elektra, X-Men: The Last Stand, and The Incredible Hulk.

Brad Furman, who directed 2013’s Runner Runner starring Justin Timberlake, hasn’t taken the comic book route, but he did follow up his poker film with The Infiltrator starring Bryan Cranston. He’s also attached to an upcoming project about the murders of Tupac Shakur and Notorious BIG.

On the flip side, directing the hated Lucky You in 2007 didn’t seem to do Curtis Hanson any favors. He didn’t direct again until 2011, and it was a TV movie. The only other feature film he’s directed since is 2012’s Chasing Mavericks. Not exactly a great career trajectory for the man who had previously directed L.A. Confidential and 8 Mile.