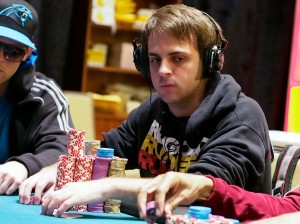 Bryan Campanello -shown here at another event – took down the last World Series of Poker Circuit Main Event of the season in New Orleans. (Image: seminolehardrockpokeropen.com)

Bryan Campanello is no stranger to the live poker tournament circuit in the United States. The young grinder has made a strong name for himself since 2011.

His first win came in a non-ring event on the 2011 World Series of Poker Circuit, and then he won an event at the PaddyPower Irish Open in 2012. But it was in 2013 that Campanello took his first WSOPC gold ring, following that up with a WSOP bracelet in Las Vegas in a $2,500 Seven-Card Razz event. He captured another Circuit ring in late 2013, and the last stop of the 2013/2014 WSOPC season offered the opportunity to grab one more. And he did.

With over $686K in live tournament earnings in just a few years, Campanello is a player to watch in the years to come.

The WSOPC wrapped its season in mid-May with a series at Harrah’s New Orleans in Louisiana. The $1,675 buy-in NLHE Main Event was the primary draw, and there were 557 total entries in the tournament over the course of two starting days. That created a prize pool of $835,500, out of which the top 63 players would be paid.

Day 2 started with 111 returning players and quickly made its way into the money with guaranteed minimum payouts of $2,732 but a healthy $175,459 awaiting the winner.

As players like Maurice Hawkins, Andrew Seidman, Charles Moore, and Tim West exited, Bryan Campanello was rising to the top of the leaderboard. Jamie Kerstetter ultimately exited in 11th place, and with the unofficial final table set, play stopped for the night.

Campanello had a massive lead going into the final 10 with 3.51 million chips, while his closest competitor was Danny Doucet with 1.2 million.

Day 3 started with the elimination of some of the shorter stacks, like John Parten, followed by Fadi Massaad, Agustin Berumen, and James Henson.

Though Campanello remained strong and eliminated John Kloch in sixth place, Gary Friendlander doubled through Campanello to gain ground and take away his lead. But he took it back by eliminating Eric Blair in fifth place and Daniel Doucet in fourth. Friedlander stepped up to push Alan Ramkhalawan out in third place.

Heads-up play started with Campanello leading with 6.1 million chips, but Friedlander was close behind with 5.3 million. The battle was intense, as each player rose to the chip lead and lost it several times. Campanello wanted the title, even if it took several hours of play to get it. Finally, Campanello was back on top and took pocket queens into the final hand against the Q-J of Friedlander. The board of J-6-4-4-7 gave Friedlander a second-place finish.

Campanello captured his third gold ring and WSOPC title, as well as a clear ticket to the WSOPC National Championship in Atlantic City. The $175,459 in cash wasn’t half bad, either.