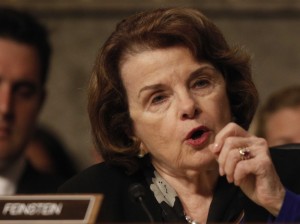 Senator Dianne Feinstein surprised and upset many in her California constituency by co-sponsoring an anti-online gaming bill at the federal level. (Image: AP)

If California has a future market in the online gaming industry, the road to get there will definitely be a volatile one if the early months of 2014 are any indication. Though the state is merely “in talks” over potential policies and plans of action, parties who hold an interest in the market are closely watching the rest of the country. What happens in Delaware, Nevada and New Jersey might be an indication of what lies in wait for California. And when sweeping legislation affecting online gaming across the nation recently came into play, it caught many California tribes and gaming interests by surprise.

Weight of the Wire Act

Those invested in California’s entry into online gaming were taken aback after learning that one of their state’s senators – Dianne Feinstein (D-CA) – was co-sponsoring a federal ban that would keep any of their plans from coming to fruition. Two weeks ago, Sen. Lindsey Graham (R-SC) and Rep. Jason Chaffetz (R-UT) officially introduced their legislation called the Restoration of America’s Wire Act.

The announcement didn’t come as surprise. Graham and Chaffetz have been quite vocal about changing the Department of Justice’s 2011 reinterpretation of the Wire Act, an interpretation which opened the gates for interstate online betting on poker. The surprise was Graham landing Feinstein as the sole Democrat to co-sponsor the bill. For one thing, it’s known that the bill is backed by Sheldon Adelson, one of the Republican Party’s biggest contributors. But in doing so, Feinstein has acted against the interests of her own state, as many Californians wish to regulate online gaming.

Chair of the California Tribal Business Alliance, Leslie Lohse, expressed her concern regarding Feinstein’s move. She mentioned that there was a lack of consultation between interested parties and the Senator before the latter moved to support the bill. Since the bill would directly impact California tribes and their potential gaming revenues, Lohse hopes that their government can speak with Feinstein on what is not only best for the state, but the Indian Country.

None of the invested parties seemed to expect this kind of move from Feinstein. Many are aware of her opposition towards gambling, yet find the lack of communication more upsetting. The Senator is taking what has traditionally been a state decision away from the state without engaging in the proper talks. The tribes are especially sensitive towards decisions affecting them being made without their involvement.

Keith Sharp – an attorney who represents the Commerce, Hawaiian Gardens and Bicycle Casinos, which are the biggest card rooms in the Los Angeles area – made note of Feinstein’s unfavorable view towards an expansion of gambling. Still, he also hopes that dialogue with her will take place and that she can be persuaded to leave the ultimate decision to the state.

If the legislation were to follow through, it would revert online gaming in the United States back to a standard from the 1960s. Sharp and others would like to see California enact legislation sooner rather than later to beat any federal ban to the punch. The state is likely to continue their push for online gaming, even as the tribes and other parties work out their issues.

On April 23, a hearing in the Assembly Governmental Organization Committee is scheduled. Online poker and its implications for the state will be discussed.

This was the last straw for me in allowing her to continue serving. She’s more Republican in many of her views than Democrat. I don’t want to make the OLP discussion a Dem/Rep thing, but if this was 50 years ago she would have to be considered a Republican.

She has always tried to support business at the expense of people. She thinks it is being a good Democrat. I think her true colors are finally showing. While she has refused to take up any issue involving gun control, she has taking this stand for poker control !!!! Really????

She will never get my vote again.

When King Sheldon speaks all Jews listen. Diane is just doing what she is told.