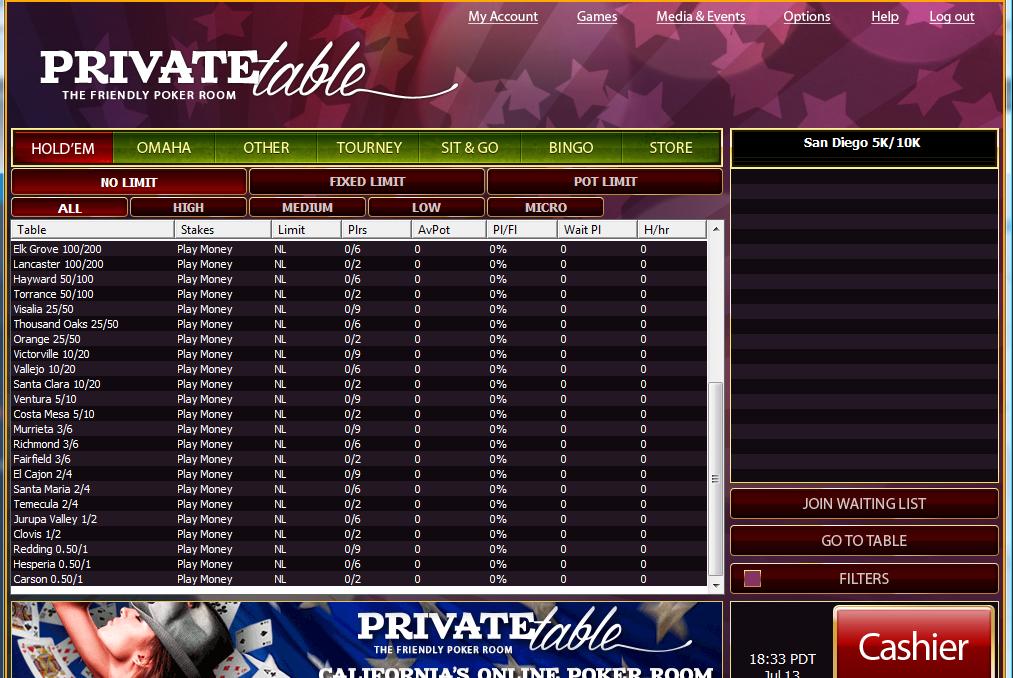 PrivateTable.com prepares for official launch in last week of August.

PrivateTable will be launched for real-money online poker later this month, according to Chairman of the Santa Ysabel Gaming Commission Dave Vialpando.

After a month of justifying its existence to the Internet gaming industry at large, the site is ready to go live for residents of California over the age of 18 by the last week of August.

The Iipay Nation of Santa Ysabel in California first debuted the online poker site for play money last month and spent the following weeks fielding questions from the media regarding its legitimacy and legality.

The site’s representatives also justified its licensing by the Kahnawake Gaming Commission of UltimateBet fame and worked out the kinks in its beta testing. And according to Vialpando, the site will now officially launch for real money “sometime between the 26th and 28th” of August.

Some feel that the tribe is walking a thin legal line

Santa Ysabel has its own gaming commission, and its website displays information, including a “Frequently Asked Question” about the legality of the site with no state law allowing for it. The Santa Ysabel Gaming Commission cites tribal law.

“Class II gaming, such as poker, have been exclusively regulated by tribes in California since 1999,” it reads. “Absent a specific state prohibition on this type of gambling activity, which does not currently exist in California, tribes are free to engage in this activity as long as the activity is regulated by the tribe as described in the federal Indian Gaming Regulatory Act. Santa Ysabel’s online gambling, as designed, is in compliance with both state and federal law.”

The organization goes further to explain that other tribes are involved in the same type of activity but have decided not to establish a regulatory structure on their own, but rather to wait for the state to do so through the legislature.

Since the California legislature failed to pursue either of the previously-introduced bills in the current session, Santa Ysabel has decided to regulate on its own and declare sovereignty under tribal gaming compacts.

Some feel that the tribe is walking a thin legal line, but Vialpando feels that the law is on its side. He told CardPlayer in a recent interview that their regulations are public documents and full disclosure offers the transparency necessary to move forward with the site’s launch.

The online website called PrivateTable is labeled as “The Friendly Poker Room.” Players can download the software, create an account, and begin playing. Customers will be required to verify that they are at least 18 years of age and validate their location to ensure they are within the borders of California.

Players can utilize the site for poker lessons or go directly to the tables and play. There will be tournaments and cash games starting at low stakes and in response to the desires of the customers. The site will likely grow with the number of players over time.

Vialpando told CardPlayer that the launch will consist of a “slow roll-out.” Features and promotions will be added as the site gains players and experience with the product, which is now “absolutely solid.” The site will continue to offer only online poker.

He also noted that PrivateTable could eventually offer games to customers in other countries via Santa Ysabel Interactive, but only if the tribe decides it is a “smart business decision.”

At that point, however, Vialpando expects that the US government might have an opinion. For the time being, the focus will be on its own site within California and a possible affiliate program. The tribe is also making itself available to other tribes for assistance in setting up their own sites under the same legal umbrella.

The PrivateTable website provides information on the Iipay Nation of Santa Ysabel, which is a Sovereign Nation in the eyes of the United States government. It is located in North San Diego County in southern California. The tribe established a Constitution in 2007 and received a patent to create its reservation in 1893.

Players can also find information on the site pertaining to payment processing and responsible gaming.

I wonder if folks really know what a ‘Gaming Commission’ in a California Tribal casino means … ?? It is an in-house wolf protecting the customer sheeples.

Of the California casinos I play at, the established ‘Gaming Commissions’ answer ONLY to that particular casino and are HIRED by the casino operators. I believe that is a Tribal-wide standard.

How many players know that Indian casinos do not answer to State officials for ANYTHING other than reporting and paying taxes? California has NO rules or regulations governing casino operations or odds manipulation and NO reporting requirements.

To ‘protect the people’, California DOES prohibit Indian casinos from providing customers with free alcoholic drinks. But do the casinos just charge the approximate ‘cost’ of the drinks? Not a chance. They charge a neat mark-up for alcohol. Read ‘markup’ = BIG profit in addition to their already monster profits on tables and slots.