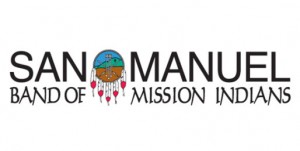 The San Manuel Band of Mission Indians has extended an existing business agreement to include the tribe with poker clubs, Morongo Mission Indians, and Amaya in support of online poker in California. (Image: San Manuel logo)

California online poker got a shot in the arm this week,  as the San Manuel Band of Mission Indians completed an accord with Amaya Gaming Group to extend an existing business agreement.

The original agreement was between Amaya, the Morongo Band of Mission Indians, and California’s three largest poker rooms: the Commerce Club, Hawaiian Gardens Casino, and the Bicycle Casino.

Amaya, of course, owns and operates PokerStars, the world’s largest online poker room. While online poker in California is not regulated or legal as of now, further unification from Native American tribes is seen as a very positive step in the right direction within the industry.

The San Manuel Band of Mission Indians made headlines as far back as April 2014 for their outspoken stance on online poker in California. Previously, many of the tribes had been at odds, battling among themselves as they tried to carve out their own piece of the potential pie if (or when) California legalizes online poker rooms, which is expected to happen in the next few years, or even sooner.

All of the gaming operators mentioned in the business agreement have joined together to operate a single online poker site in California once legislation is passed that would authorize real-money games online in the Golden State. This group has coalesced with the aim of advocating legislation that would extend California’s existing laws to include intrastate online poker.

Lynn Valbuena, chairwoman of the San Manuel Band of Mission Indians, stated in a press release circulated by Amaya that her tribe is proud to join the team. “We are pleased to join this coalition… We are convinced that the various interests must work together if we are to be successful in establishing a well-regulated environment and the best-in-class Internet poker industry for California.”

“We’re pleased to welcome San Manuel to our coalition. It marks a new day in our efforts to authorize online poker in California… We’re excited about the momentum and opportunities this new agreement represents in getting legislation passed. As tribes come together on this issue, the opportunity for success grows,” Martin said.

With some of the biggest Native American tribes and major California poker rooms on board with the same vision and mission, it would appear the strength behind efforts to legalize online poker in the Golden State have never been stronger.

Attorney Keith Sharp, who spoke on behalf of the Commerce, Bicycle Club, and Hawaiian Gardens, said that his clients are pleased to welcome San Manuel to the coalition. He also stated that they look forward to actively working with legislators and industry colleagues to pass a strongly regulated bill that ensures consumer protection.

Finally, Guy Templer, the group business development director with PokerStars, referred to San Manuel as a strong, forward thinking gaming operator and a great partner to bring onboard. He went on to say that they will work to develop an open and well-regulated iPoker market in California.