California Online Poker Bill Back for Another Push, Assemblyman Jones-Sawyer Is Sponsor

Yet another California online poker bill has been reintroduced. AB 1677, sponsored by State Assemblyman Reginald Jones-Sawyer (D-59th District), was proposed again on February 17. 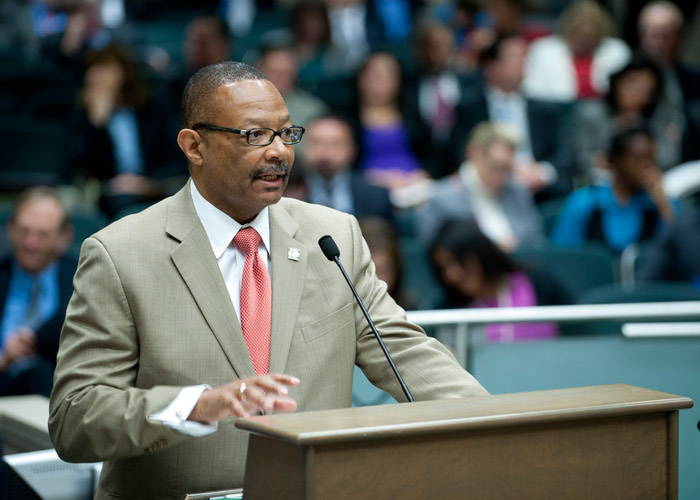 A California online poker bill returns, thanks to State Assemblyman Reginald Jones-Sawyer (D-59th District). But can gaming factions finally make peace with each other and move forward? (Image: scpr.org)

The measure would allow the Golden State’s Indian tribes and card rooms to apply for a license to operate an online poker site. Should it pass through the proper channels, AB 1677 would finally bring internet poker to the largest state in the country, after many tries. The Poker Players Alliance (PPA), along with Jones-Sawyer, former bill co-sponsor State Assemblymen Adam Gray (D-21st District), along with several influential poker pros, has made repeated efforts to convince lawmakers to pass legislation, but so far with no success.

If Las Vegas sportsbooks took bets on the bill passing in 2017, the odds wouldn’t be favorable. But the same was said about a certain reality TV star becoming President of the United States, so anything is possible.

What’s in the Bill?

Assemblyman Jones-Sawyer’s bill would give card room owners and Indian tribes an opportunity to apply for an online poker license. Racetracks would be prohibited from operating a poker site, but would receive an annual stipend which equates to 95 percent of the first $60 million collected each year.

It would remain illegal to operate an internet site in California without a license.  Violation of the Internet Consumer Protection Act of 2016 (AB 1677) will be classified as a felony. Those who choose to operate in the Pacific state without a license could face massive fines and even potential jail time, if convicted.

There is a hefty fee businesses must pay to offer internet poker in the Golden State. A seven-year license would cost $12.5 million. Poker site owners will only be allowed to offer “authorized internet poker games permitted by the state.” Casino games such as slot machines and roulette would be excluded.

Taxes are based on a progressive scale up to a 15 percent rate (gross revenues exceeding $350 million) and as low as 8.847-percent (under $150 million). Companies generating $150 million to $350 million in online gaming revenue would pay between 10 to 15 percent in taxes.

The Struggle is Real

With 39 million residents and the world’s sixth-largest economy, California entering the online poker arena would be a huge triumph. Should the state legalize online poker, the industry would benefit and we could see a domino effect in the United States.

But near-mythic infighting between tribal factions, the horse racing industry, and online operators themselves has pushed the reality of legal and regulated online poker constantly to the back burner. Could 2017 be the year the greater good overcomes special interests? It’s all about the money, obviously. When each faction feels content with their piece of the pie, dessert may finally be served up in California.

Get the HRA out of the POKER business, or, let them run their own poker biz, but don’t burden me with supporting old horse trainers…..forever!

Letting them blackmail the poker players is a very wrong way to approach this.

Rename this bill “Dying Business Retirement Fund’, discard it, and move on. Else I might claim my buggywhip making grandpa is owed money from the Auto Industry!