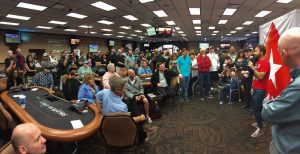 PokerStars has been working towards building support for online poker in California. (Image: Californians for Responsible iPoker)

Online poker proponents know that getting regulation passed in California was always a longshot this year, with efforts more likely to build towards 2016 or beyond rather than result in legislation during 2015.

But if anyone was holding on to hope that the state might hit a one-outer, it’s time to admit defeat, as the river has finally been dealt on this hand.

California’s legislative session ended on Friday, and it came with relatively little movement for online poker bills throughout the year.

That doesn’t mean the session was a total loss for advocates, as progress was certainly made, but it is clear that there is still some way to go before enough support can get behind any single proposal to ensure its passage.

One Bill Moves Out of Committee

The closest the state came to an online poker bill getting a full vote came from a bill proposed by Assemblyman Adam Gray (D-Merced), who managed to at least get his legislation (a shell bill without any detailed policy proposals) through the Assembly’s Governmental Organization Committee.

Other bills, such as those proposed by State Senator Isadore Hall (D-South Bay) and Assemblyman Mike Gatto (D-Glendale), were never given much attention in the legislature.

The biggest issue in California remains the divisions between the various gambling factions in the state, all of which want a piece of the pie and are reluctant to give in to their rivals.

However, 2015 saw at least a little bit of potential on this front, as some minor compromises helped to shape some larger coalitions heading into 2016.

Most notably, some of the Native American tribal groups that had been opposed to allowing the horse racing industry to enter the online poker market joined the PokerStars coalition, siding with the Morongo Band of Mission Indians, Caesars, and several large card rooms including the Bicycle Casino and the Commerce Casino.

The Pechanga Band of Luiseno Mission Indians still has a coalition of 10 tribes who are staunchly against the inclusion of horse tracks in any Internet gambling framework.

There have been signs that the Pechenga might be willing to agree to a revenue-sharing plan with the horse racing industry, but that plan has not been well-received by the tracks, which say they should have the right to operate their own sites.

Another issue dividing the two sides has been the always controversial “bad actor” clause, one that would essentially be used to keep PokerStars out of the market because they continued operating in the United States after the Unlawful Internet Gambling Enforcement Act went into effect.

PokerStars has been active in trying to rally legislators and poker players to their cause, however, a campaign that culminated this year in the formation of Californians for Responsible iPoker and the PokerStars Pro Tour, which saw PokerStars representatives like Daniel Negreanu, Vanessa Selbst and Jason Somerville visit card rooms across the state.

What are the chances for online poker in California next year? As in poker, it’s hard to say for certain: after all, we can’t see the other hands, so we can only do our best to estimate the odds of a win.

However, it seems reasonable to look at the momentum from 2015 and think that the likelihood of online poker legislation passing in California next year is somewhere around a coin flip.

Earlier this year, Gatto suggested that he felt there was a 35 percent chance for an online poker bill to pass by the end of 2016, and the action in the state since then can only have improved those odds, albeit slightly.

When will these moron politicians get it right, they only have one thing on their minds, and that’s their job, screw Joe public.