Byron Kaverman is a veteran of the tournament circuit, and one that has had plenty of success. He’s been at the final table of World Poker Tour events, has 20 WSOP cashes, and is in the top ten of the Global Poker Index rankings. But until Friday, he had never won a gold bracelet. Now he can add that accolade to his extensive roster of accomplishments. 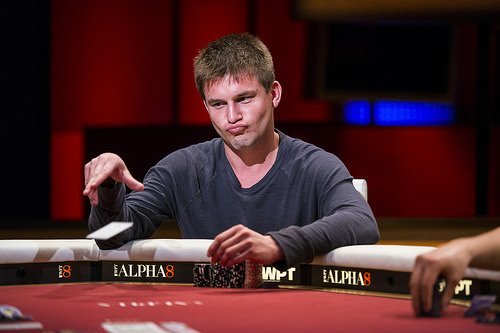 Kaverman wasn’t alone, as three bracelets were handed out at the World Series of Poker on Friday, with a fourth tournament coming very close to ending at the end of the night. The winners included two who had previously scored WSOP victories during their careers, as well as Kaverman’s first.

Kaverman won the $10,000 Six-Handed No Limit Hold’em Championship event, earning himself $657,351 and his first WSOP title. He had to do plenty of work to pull out the victory, as he had to battle through a final table that included luminaries such as Paul Volpe and Sam Greenwood before defeating Doug Polk in heads-up play.

“It was absolutely thrilling to win,” Kaverman told WSOP.com. “This is one I was really motivated for. It definitely had one of the toughest lineups there is.”

Volpe’s final table performance was particularly notable. His sixth place finish not only earned him nearly $90,000, but it also marked his third final table of the WSOP so far this year, enough to give him a significant lead in the WSOP Player of the Year standings.

Dan Idema came into the final day of the $3,000 H.O.R.S.E. tournament as the short stack of three remaining players. But that wasn’t enough to stop the Canadian pro, who took only an hour to turn the tables, eliminate his two opponents, and win the third WSOP gold bracelet of his career and a $261,774 prize. 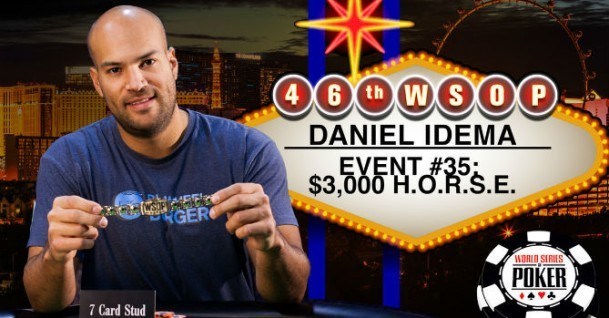 Idema has always been proficient at a number of different poker formats, having previously won bracelets in Seven Card Stud Hi/Lo and No Limit Hold’em. He said that he wasn’t surprised that he was able to score a win in H.O.R.S.E., as the mixed format is right up his alley.

“I really like this format of mixed limit games,” Idema said after the tournament. “You don’t see that many players play all the games well, so I think this is suited to someone who has tried to develop in all of them, as I have.”

Of course, a little luck helps too, and Idema admitted he had a run of great cards right at the end of the tournament.

“My rush came at just the right time,” he said. “I got hit by the deck against a very strong opponent.”

Andre Boyer is hardly a household name in the poker world, and few, if any, are likely to remember his WSOP bracelet win from a decade ago. But the 72-year-old retired businessman from Quebec showed that he still has plenty of game, winning the $1,500 buy-in Split Format No Limit Hold’em tournament.

The win earned Boyer $250,483, as well as plenty of respect. In order to win the tournament, Boyer had to show comfort with a number of different table sizes, ranging from full ring nine-handed play to a day a heads-up matches.

“This format is totally different. You need skill to win,” Boyer said to WSOP.com. “You can’t just win a big pot on Day Two and coast to the final table. You are constantly tested.”

Going into the day on Friday, many expected four bracelets to be awarded. However, one tournament came up just short of finishing, as the $1,500 Pot Limit Omaha tournament only made it to heads-up play before being stopped for the night around 1:30 am local time in Las Vegas on Saturday morning.

Corrie Wunstel and Kevin Saul will return to the Rio to battle for a bracelet and the $266,874 first prize on Saturday afternoon, with Wunstel holding about a 5-3 chip lead. Both players are seeking their first career WSOP bracelets.

The $3,000 No Limit Hold’em tournament is down to its final 48 players heading into Day 3, with Canada’s Jean-Pascal Savard holding the chip lead. Savard is the only player holding over 1 million in chips, but there are plenty of other big stacks out there, including those belonging to Jesse Sylvia, Justin Schwartz, and Chris Moorman, all of whom are seeking their first WSOP bracelets in their otherwise accomplished careers.

The $1,500 Ten-Game Mix event is down to just nine players, and given the tough array of games players must navigate in this tournament, it should come as no surprise that many of the remaining players are well-known for their all-around poker prowess.

Brian Hastings has the chip lead heading into the final day of play, but Mike Watson, Eric Wasserson, and Todd Brunson are among those who are still in contention as well. 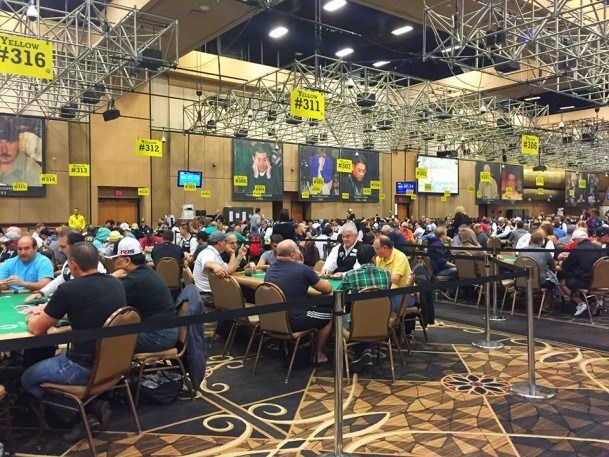 About halfway through the World Series of Poker now, action continues today with an expected two new bracelets to be handed out by day’s end. (Image: CardsChat.com exclusive)

In one of the biggest fields so far this year, 4,193 players turned out for the $1,000 Seniors No Limit Hold’em Championship, a tournament open only to players age 50 and over. A total of 566 players survived to make it through to Day 2, with Dale Eberle of South Carolina leading the way.

In contrast, only 111 players registered for the $10,000 Seven Card Stud Hi/Lo championship, though it’s probably fair to say that the field is a bit tougher in this one.

Ryan Miller is the biggest stack among 64 players still in contention heading into Day 2, with Max Pescatori, Norman Chad (yup, the ESPN commentator), John Racener, and Calvin Anderson among the bigger stacks.

Two new winners will certainly be crowned on Saturday, as the $1,500 Pot Limit Omaha tournament and the Ten-Game Mix are both down to a handful of players. The $3,000 No Limit Hold’em was also scheduled to finish up today, but with nearly 50 players still alive, it’s unlikely that a winner will be determined before Sunday.

And there’s just one new event on the schedule today: the $1,500 Extended Play Texas Hold’em tournament. For those who like a nice, relaxed tournament pace that allows for plenty of play, this event offers 90-minute levels and should take at least four days to complete.