Tom Dwan is never one to shy away from a bluff but, in the latest Triton Madrid cash game video, his decision to check on the river cost him a pot worth more than €890K. 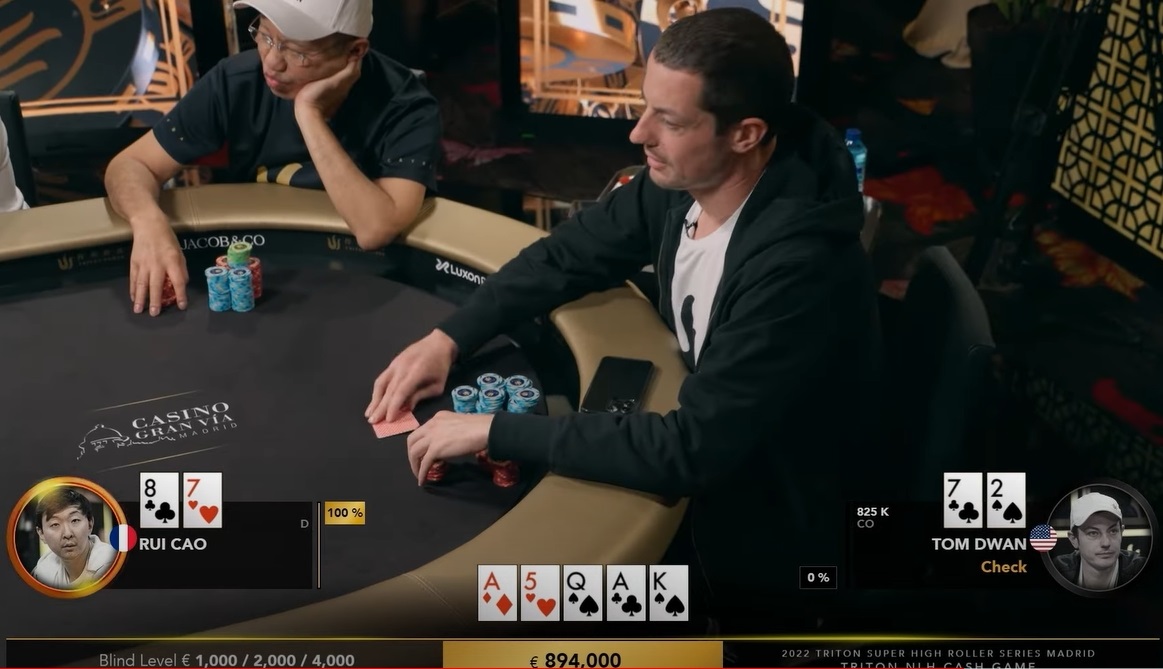 Tom Dwan cost himself more than €300K after trying to bluff Rui Cao in a huge pot. (Image: YouTube/Triton Poker)

The man known to many as Durrrr is often the first one to spice up cash games with a 7-2 bounty. This means anyone who wins a pot with 7-2 — and who shows the hand — gets a bonus. On this occasion, Dwan asked his fellow high-stakes pros at Triton Madrid to put a *€10K bounty on 7-2.

It all started with 7♣ 2♠ and a raise from Dwan (see video below). The notoriously loose Rui Cao three-bet with 8♣ 7♥ and the action folded to Dwan. Having made his proverbial bed, Dwan was prepared to lie in it. In other words, he was going all the way with 7-2.

Dwan called and the flop came A♦ 5♥ Q♠. Dwan checked and Cao continued his aggressive line. Dwan seized control at this point with a check-raise. Cao called, allowing the A♣ to fall on the turn.

A huge pot was brewing at this point. Dwan asked Cao for a count, to which he replied, “less than €400K,” With almost €500K in the middle and the stacks close to even, it looked like a strong spot for Dwan to continue his bluff.

He fired €160K into the pot and, after some deliberation, Cao called. The river was the K♠, putting Dwan in a tough spot. He’d dug himself a huge hole with 7-2 and he either had to throw a hail Mary or check and risk losing the pot, an extra €10K, and some pride.

On this occasion, Dwan decided discretion was the better part of valor. He said soon after folding that he believed Cao would snap-call a bet. Based on this logic, Dwan gave up on his bluff and checked.

Bluffs are part of poker and Dwan has run some extremely successful ones in the past. However, on this occasion, his penchant for pushing people around went spectacularly wrong, costing him more than €300K and a healthy dose of embarrassment.

For poker fans, however, it’s another classic hand from Triton, which is quickly becoming a rival to the ever-popular show, High Stakes Poker.